Death announced of the Irish man who founded Alltech

The death has been announced of the founder and president of Alltech, Dr. Pearse Lyons.

Alltech confirmed the sad news this afternoon, stating in a tweet: “We are deeply saddened to share the news that we have said goodbye today to our president, founder and friend, Dr. Pearse Lyons.”

We are deeply saddened to share the news that we have said goodbye today to our president, founder and friend, Dr. Pearse Lyons. https://t.co/mKRKOqHuXU pic.twitter.com/remSnBNjGt 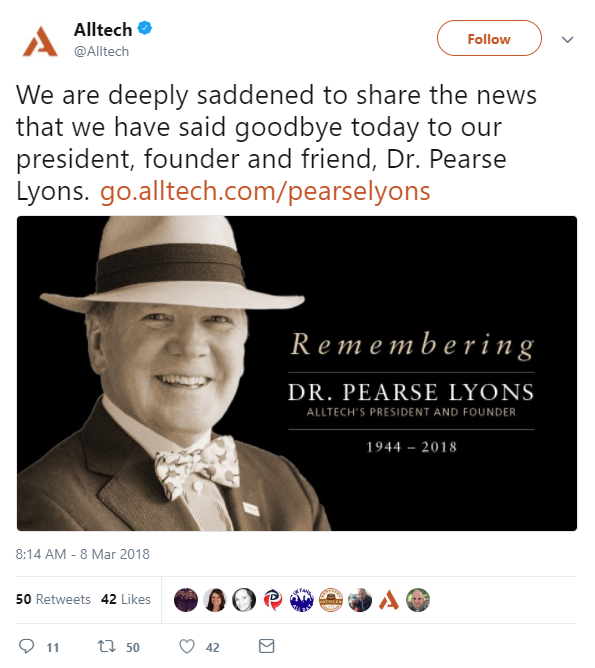 The company released a short obituary giving an account of the Louth man who established the US-based animal health giant.

“Dr. Pearse Lyons, the Irish entrepreneur whose vision for improving global agriculture built a multibillion-dollar international business, died [on] March 8. He was 73.

“In the late 1970s, Lyons immigrated to the United States with his young family – Deirdre, Aoife and Mark.”

Alltech revealed that the company Dr. Lyons established has grown over the years to employ more than 5,000 people around the world.

The company statement said: “Its mission has always been guided by Dr. Lyons’ early commitment to the “ACE principle” – a promise that the company’s work must have a positive impact on the Animal, the Consumer and the Environment.

“Dr. Lyons was first and foremost an entrepreneur and tireless innovator, with a keen scientific mind. His scientific expertise, combined with an acute business sense, helped revolutionize the animal feed industry through the introduction of natural ingredients to animal feed.

“He was widely regarded as an inspirational leader and communicator,” the statement read.

Alltech also announced that funeral masses will be held in Lexington, Kentucky, USA, on March 17 and in Dublin, Ireland, in April.

With a headquarters in Kentucky, Alltech focuses on improving animal, crop and human health and performance through its use of yeast fermentation, enzyme technology, algae and nutrigenomics.

A European Bioscience Centre was opened in Dunboyne, Co. Meath, in 1999. The facility is home to the company’s European Headquarters, from which it supports 32 countries.

In 2016, Alltech acquired Keenan – the Borris-based manufacturer of diet feeders and other farm machinery.