Joe and Kathleen Kirwan – a husband-and-wife team – from Laurel Lodge, Co. Tipperary, have overseen major changes to their dairy business in recent years.

Previously, the Kirwans milked a herd of 70 high-yielding Holstein cows on a 66ac block. But when a 104ac farm became available to rent, just across the road, the wheels of expansion where put into motion.

To make expansion successful, the Tipperary-based farmers made the decision to instead focus on milking a herd of crossbred cows. 136 cows were milked in 2016, almost 200 cows passed through the parlour this year and plans are in place to milk 220 come 2018.

Given the journey undertaken by the Kirwans, the majority of their herd is still relatively young – 140 of the cows are either first of second-parity animals.

Last week, as part of an LIC Monitor Farm walk, the Kirwans opened the gates of their farm to map the highs and lows of 2017.

As it stands, 165 cows are currently in milk and 31 cows have been dried off. Each cow in the milking herd is producing 13.8L/day and 1.28kg of milk solids. 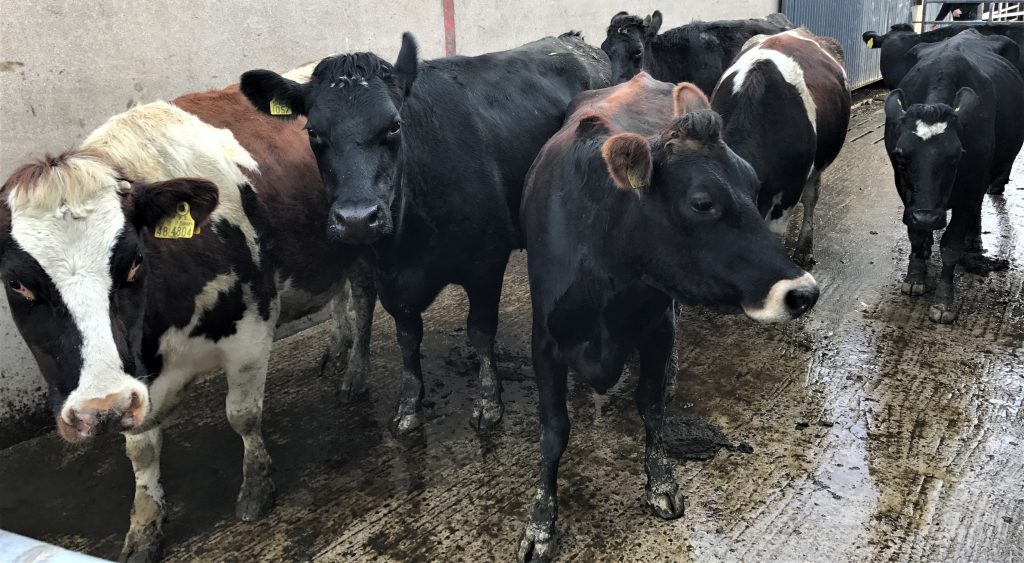 “We’re quite happy with that and we’ll be heading towards an average production of 5,500-6,000L/cow from a concentrate input of approximately 500kg/cow,” Joe Kirwan explained.

Solids production has also improved significantly and the herd’s expected to deliver over 8% solids this year (3.7% protein and 4.4% fat).

In the future, it’s hoped that solids production will increase to 9%. But, Kirwan expects milk yield to dip slightly once this target has been achieved.

We are looking for the idyllic cow that will produce 500kg of solids from 500kg of concentrates.

Like any dairy farm, fertility is on of the key drivers of profit. However, 2017 has been a rather difficult year for the Kirwans’ herd.

This year, the husband-and-wife team set out to achieve a six-week, in-calf rate of 75%. They failed to hit this target and only 66% of the cows in the herd hit the ‘bullseye’. However, this was still an improvement of 6% compared to 2016. 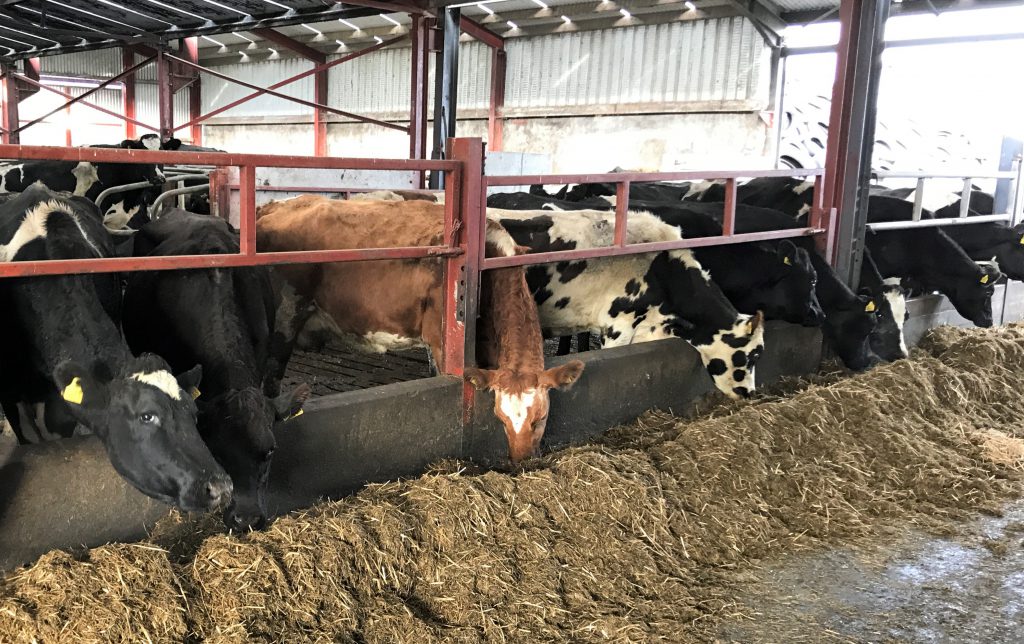 In addition, 82% of the herd is expected to calve in the first six weeks of the calving season next spring. That’s up from 72% last spring, but still below the target of 90%.

Calving and fertility – the facts and figures:

Furthermore, the herd had a higher than ideal empty rate; 14% of the cows were empty, while the heifer empty rate stood at 10% – a headache that the Kirwans didn’t need.

Kirwan said there were two reasons why conception rates were lower than ideal. Firstly, the two Angus  bulls used to cover any cows after the initial phase of AI breeding failed to deliver. Secondly, the herd suffered a phosphorous deficiency at the ‘right-wrong’ time.

“What was looking like a good breeding season was very much hampered by the fact that our stock bulls didn’t perform to the standards that were required.

“One of the Angus bulls went out with the heifers after four weeks of AI; I don’t think he got any heifer in calf. We ended up with four empty out of 42.

We have little or no cows in calf to the Angus bulls and we’re going to have to reevaluate buying bulls and how we get the later-calving cows in calf in the future.

“At the moment, I’m beginning to think that we will use a vasectomised bull to identify these cows and we will continue to AI. That’s what I’m thinking at the minute and it will take a bit to change my mind.”

A blow at the ‘right-wrong’ time

“It started off with the cows eating the roadways coming up along to the parlour. Several of them got sick and, on veterinary examination, we found stones in their stomachs. That’s a typical sign of phosphorous deficiency.”

Given this, the Kirwans opted to increase concentrate supplementation rates; extra phosphorous was delivered through in-parlour feeding. Phosphorous blocks were also purchased and given to the herd.

One of the phosphorous blocks used to tackle the deficiency

Despite the issues with bulls and the phosphorous deficiency, Kirwan was confident that the herd would have hit the 9% empty rate target (cows) if these issues did not arise.

“If we hadn’t faced those issues, I believe that we would have hit the mark. On the whole, given the issues the farm has faced, to feed 500-600kg of concentrate is not bad going.

However, we can’t afford to have issues like this occurring during the breeding season. It could have caused more havoc than it did.

“We need to have a robust plan in place and we have developed a plan with the vets that will see us taking blood samples once a month to keep and eye on things.”

What to do with 20 empty cows?

“We paid €1,400 for some of the cows as heifers and to cull them after one lactation isn’t going to work. How would I explain that to the bank manager?

“When you embark on a high spend, you have to make sense of some of the things you are doing. I can’t just cull 200 cows this year because they are empty. It just doesn’t make financial sense at the moment.”

Last year, Kirwan gave eight empty cows to a neighbouring farmer to milk on over the winter months. He was very happy with how these cows performed this year, adding: “They actually surprised me; they milked as good as the average cow in the herd. 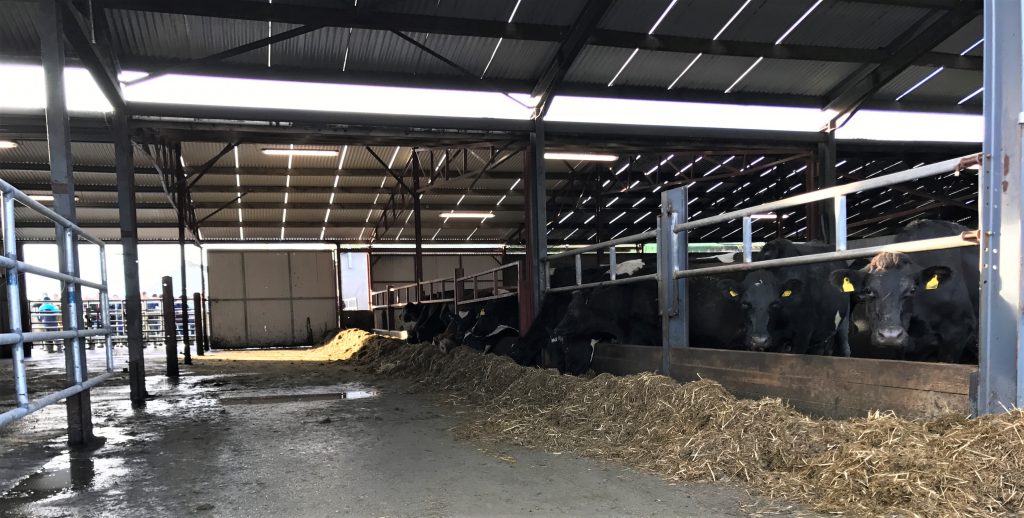 “When I resumed milking, they all came in on day one. They’ve had a very long lactation and seven of them have milked very well.”

Along with being happy with the performance of the cows carried over last year, there are two other reasons why Kirwan will milk on the empty cows this year.

On this, he said: “Milk price is very strong and we got over 48c/L last month. We also have the labour to do the milking over the winter, as our son Stephen has returned home.”

A word of caution

On the possibility of milking on in future years, he said: “By no means is it my intention to be milking cows during the winter for the next 20 years; it wasn’t even my intention this year.

Nobody should be setting up a system in which they have to milk on empty cows. That’s a failure of the system if you have to do it. It also shouldn’t be a template for correcting bad management.

“We have almost 70 heifers coming in to the herd in the future; we will have enough to maintain a herd of 220 cows. At that stage, I won’t be considering milking on cows.”

Are we waving goodbye to liquid milk?