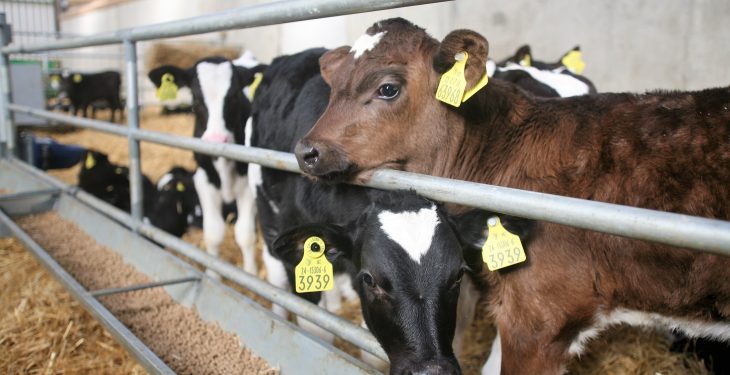 Switching to a skimmed milk based replacer – from a whey-based powder – is allowing a dairy enterprise to reduce the volume fed to calves through an automatic feeder by 33%.

Kevin and Ann Murphy, who trade as Cosy Farms at Gorey, Co. Wexford, have been rearing calves from their 220 spring-calving, crossbred, cows on an automatic feeder since 2014.

Although the calves performed well in the first two years, they consumed large volumes of replacer.

Even though calves were not introduced to the feeder until they were two-to-three weeks old, each consumed three bags of powder before weaning at 67 days – much higher compared to the volume used when they were bucket fed.

Kevin Murphy explained: “It was almost impossible to get calves to consume any decent level of ration. The calves were softer and had less growth potential.”

He sought advice from John Brennan, a regional Glanbia business manager, who suggested moving from a whey-based powder to GAIN SHINE – a powder manufactured from skimmed milk. This, he said, would reduce stress on calves when they started feeding on the automatic feeder.

John also suggested tailoring the feed plan to suit the system by starting the calves on a plane of nutrition comparable to their existing diet.

This resulted in a reduction of 14 days on the total number of days the calves were on the automatic feeder; powder consumption also fell by almost 33%.

Ration intake was slightly lower for the first three weeks after calves were introduced to the feeder, but improved at the end of the feed curve, Bonanza Calf Nutrition’s Joe Murphy said.

Advertisement
Calves weaned indoors at an average of 67 days; they were eating 3kg of ration and straw was also provided.

Post-weaning performance, which had been a major stumbling block in 2015 and 2016, has been excellent, Kevin said.

Calves born in the spring of 2017 grew better and there have been no growth checks post-weaning or at grass.

All calves were turned out to grass in mid-June and received no ration from July 1. All 62 heifer calves were weighed in mid-August and were on target.

“We are now looking forward to the 2018 season with the knowledge that we are getting the best from our feeder,” Ann Murphy added.

One of the most common mistakes, Joe said, farmers make with computer feeders is to give calves inadequate nutrition at the beginning of the feed programme. This means calves spend too many days, in total, on the feeder.

The lack of nutrition at the start of many computer feed curves will stress very young calves, which leads to increased infection levels.

“Extending the feed curve too long leads to excessive calf numbers in many sheds and results in many respiratory and infective scour events, which could have been avoided,” Joe said.

At Cosy Farms, the Murphys are now planning to rear some calves on the computer feeder to sell – a first for the business.