After toying with the idea of crossbreeding his herd of Holstein Friesian cows, Jarlath Hughes decided to take the plunge and buy 70 crossbred heifers in 2013.

Farming in Summerhill, Co. Meath, Hughes had previously kept a herd of Holstein Friesian cows, which he said were beginning to border on the extreme.

“I had gone down the pedigree route and the cows had very poor fertility and solids percentages.”

And after using Ayrshire, Jersey and Kiwi-Cross semen to try and improve these traits, Hughes discovered that the process of breeding a crossbred herd would take too long.

It would take seven-to-nine years to grow a crossbred herd through breeding, it was just too slow.

“Having done the research on the animal and the system, I just decided to go for it in 2013 and as it happened it was a good year to do it.

“There was a very strong trade for the Holstein Friesians up North and it was still a quota year so farmers had surplus stock to sell.

“I sold all my spring calving Holstein Frieisian cows and replaced them with crossbred heifers, but I kept the autumn calvers with the intention to sell them the following year.”

However, the Meath-based dairy farmer admitted that it wasn’t all plain sailing as a TB outbreak in 2014 forced him to hold on to his autumn-calving cows and milk them for a second winter.

These autumn-calvers have since been replaced with home-bred heifers from the original group of 70 to leave Hughes milking 110 cows this spring – 90-95% of which are crossbred.

Change the cow or the system?

Producing milk from grass had become a key aspect of the business, but Hughes found that his Holstein Friesian cows weren’t ticking all the boxes when it came to a grass-based system.

Prior to the change over, the Summerhill-based farmer was running over 100 cows on a 30ha milking platform and he faced a dilemma: change the cow or change the system?

I was faced with two options: increase the amount of meal I fed to the Holstein Friesians and move away from grass or change to a crossbred herd.

And Hughes choose the latter adding that poor fertility played a key role in his decision.

“Fertility was the single biggest issue I had, the herd had a 30% empty rate before the change to a crossbred herd.

“If that wasn’t corrected, no matter what level of output or milk sales you achieve, the business isn’t sustainable,” he said.

Happy with a crossbred herd

“The crossbred cow suits my system – a low-input, grass-based system – and when I look back at where the herd has came from I would never go back,” he said.

“The cows did about 420kg of Milk Solids each last year on 250-260kg of concentrate input and I am planning to use a little bit more concentrate this year.

Touching on the fertility performance, Hughes said this area has been excellent.

“Just over 70% of the cows will calve down in three weeks and only 5.5% of the cows were empty after 12 weeks of breeding last spring.

“Because there is such a low replacement rate, as only 5.5% of the cows were empty, I need to bring in very few heifers to maintain numbers.

“This keeps the management of the system simple, as there is only one group of cows, a small group of replacement heifers and a group of calves,” he said.

Where to go with a crossbred herd?

Many farmers may find it difficult to choose what bulls to use on their crossbred cows, but Hughes has his mind made up on this years bulls already, which include a number of Kiwi Cross Sires.

“I chose bulls that have been proven under Irish or New Zealand conditions.

“I personally think the genomics is great in theory, but I would still prefer to see the type of animal you would be getting.

“My farm suits a specific type of animal and if I go down the route of the very high EBI Friesian, the confirmation of that animal may not suit my farm.

“That’s why I am sticking with proven bulls because I know what they deliver,” he said. For more information on LIC and crossbreeding 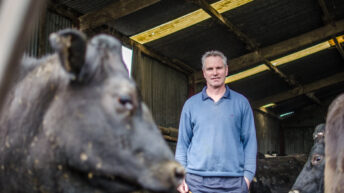