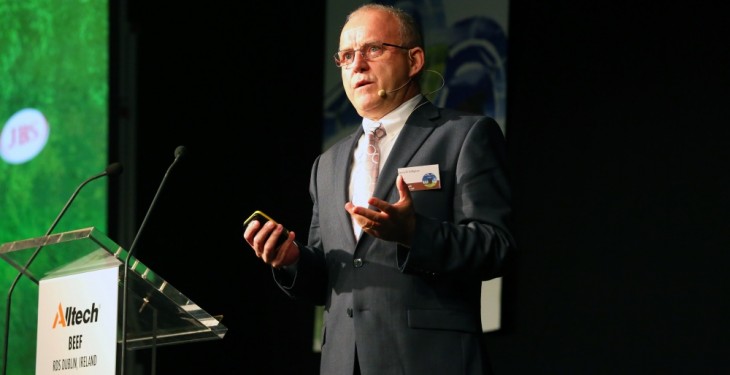 The View from Alltech 500: With 81 per cent of meat protein consumption growth between 2010 and 2020 predicted to come from emerging markets, investor relations director, Jerry O’Callaghan of Brazilian Beef and Meat Company JBS outlined the potential for industry growth at the Alltech 500 conference in Dublin today.

Born in Cork, O’Callaghan moved to Brazil in 1979 and began his career in the Brazilian beef industry. He joined JBS a family owned company in 1996, when it had annual sales of about US$100m. JBS is today one of the world’s largest meat company, with annual sales of over US$45bn.

In the early 2000s Brazil became a booming exporting beef market, with one third of its beef going to export, according to the company. With a growing middle class in Brazil, domestic consumption has increased such that only 18 per cent of JBS’s Brazilian beef is exported, it said.

JBS itself has also evolved within its markets. From its core initial strategy of developing efficient production platforms, it has expanded its global sales and distribution platform, and grown its value-added products portfolio.

Compared with other meat products, beef production has the least potential to grow in volume terms. JBS sees significant opportunities in the branding of beef. It has instigated programmes associating quality to branding as a means to increase client loyalty. O’Callaghan believes that the era of commodity beef production is beginning to wane. As consumers become more sophisticated, JBS is looking more at segmenting its markets and innovating to facilitate local market requirements across the world.

Founded as a family owned company in 1953 in Brazil.
Became a public company in March 2007
Presence in 5 continents and sales in more than 150 countries.
185,000 employees
Annual sales of US$45bn, US$15bn from exports