Considering dairy? Which system suits you? 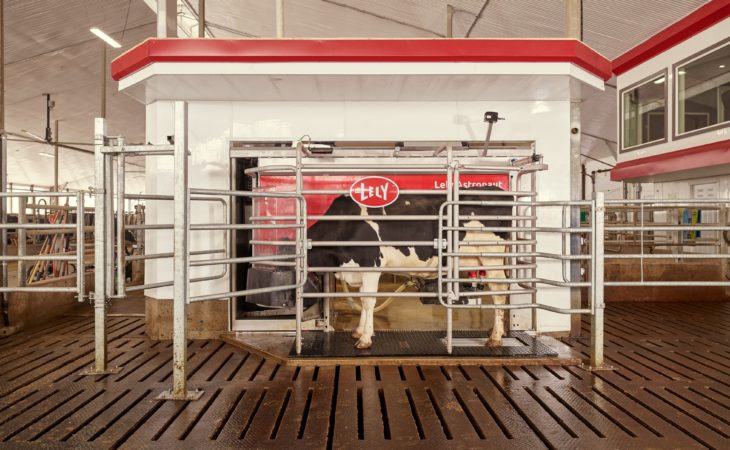 Two dairy farming families will open the gates of their farms as part of a series of upcoming Lely robotic milking open days. The two farms operate different systems; one is a grass-based, spring-calving system and the other is a zero-grazing, indoor system.

An open day will take place on the Thomas family’s farm in Rahan, Tullamore, Co. Offaly. Ivan and Susan Thomas, along with their son David, are new entrants to dairy farming and milk 102 spring-calving cows under a partnership agreement.

Previously, they were suckler farmers who finished all progeny to beef. They purchased two Lely robots and started milking in January 2018. 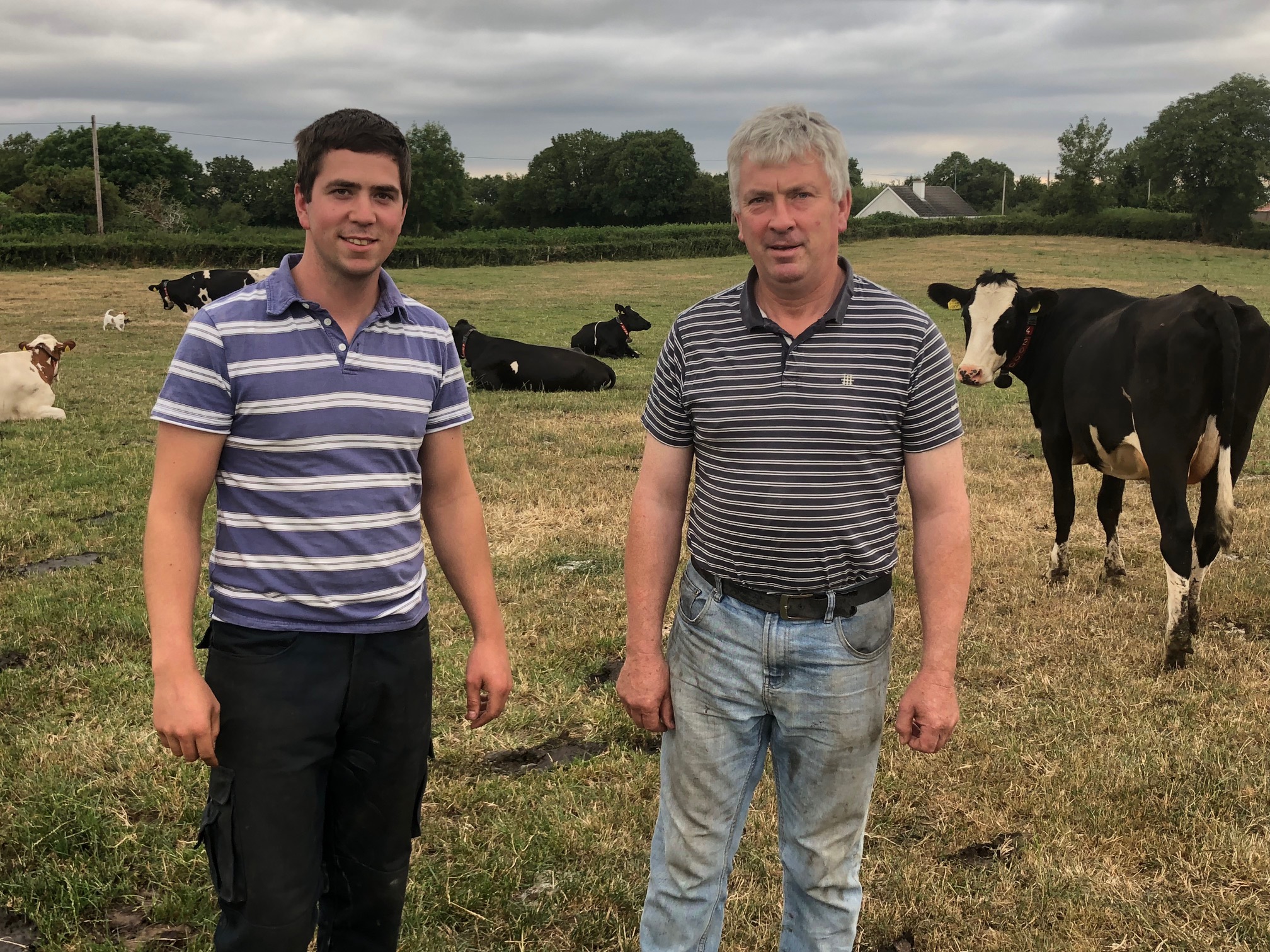 Ivan explained: “We had 60 Limousin-cross cows and some tillage here. My son David was finishing up in UCD with a B.Ag.Sc and always wanted to come home to farm.

“We felt our farm wasn’t capable of giving us two incomes, so we decided to look at dairying. We looked at all the options on the market, including milking parlours, but believed that milking robots were better suited to our yard.

“A new parlour, collecting yard and dairy would have consisted of a new build away from the main sheds and it wouldn’t tie in with the existing yard. 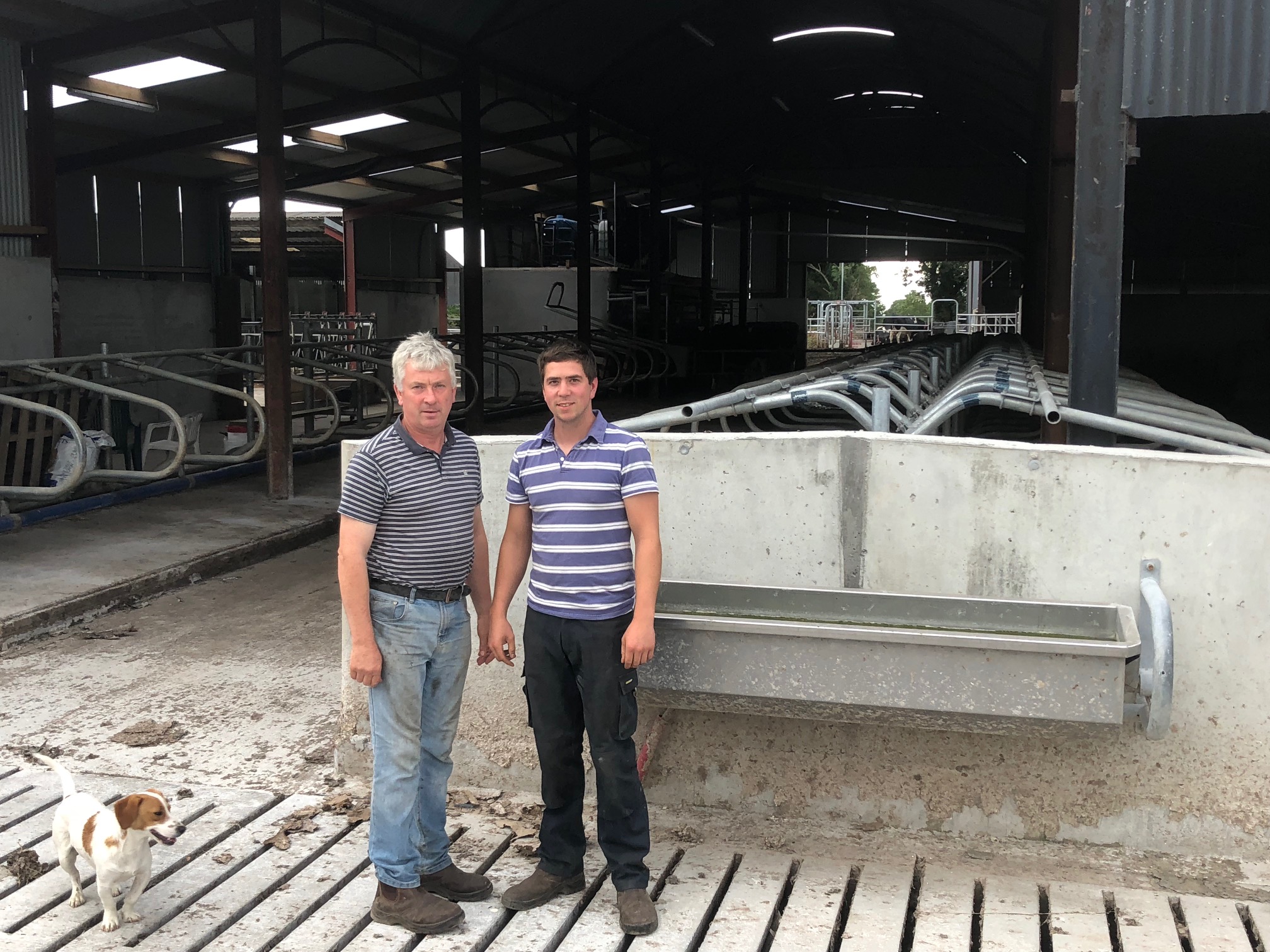 “With that, we decided to buy two Lely robots, convert some existing slatted houses into cubicles and put in two extra slatted tanks.

“The building work was minimal and we worked closely with the yard design and farm planning team in Lely Center Mullingar to make the existing yard work for us,” he added.

David commented on starting up with robots, adding: “We were prepared for the worst. While it was challenging, it wasn’t as bad as we anticipated.

“We bought 102 heifers and had 60 calved in the first three weeks, so we were busy calf rearing too. The heifers went on training mode for a few days prior to calving and this certainly helped.

“On average, most heifers adapted to the new milking robot in two-to-four days; a handful took two-to-three weeks, but we thought it would be much worse.”

“We had to push them through the Grazeway and texas gates and once they made a path on the ground, it just seemed to work. The key to it is growing, managing and allocating the right grass in the paddocks and we haven’t had to sweep paddocks or collect cows so far on this farm.”

“We thought there was too much information at the start; but now we only look at the dashboard and get the information we need to make daily decisions,” David stated.

“We have a decent land base in one block here and are currently phasing out the beef stock,” Ivan commented.

“We plan to calve down 140 cows next spring and drive things on. We are happy with our investment and the service Lely Center Mullingar provide.

“They helped with yard design, farm planning, and farm management support. We got a turn-key solution from them. 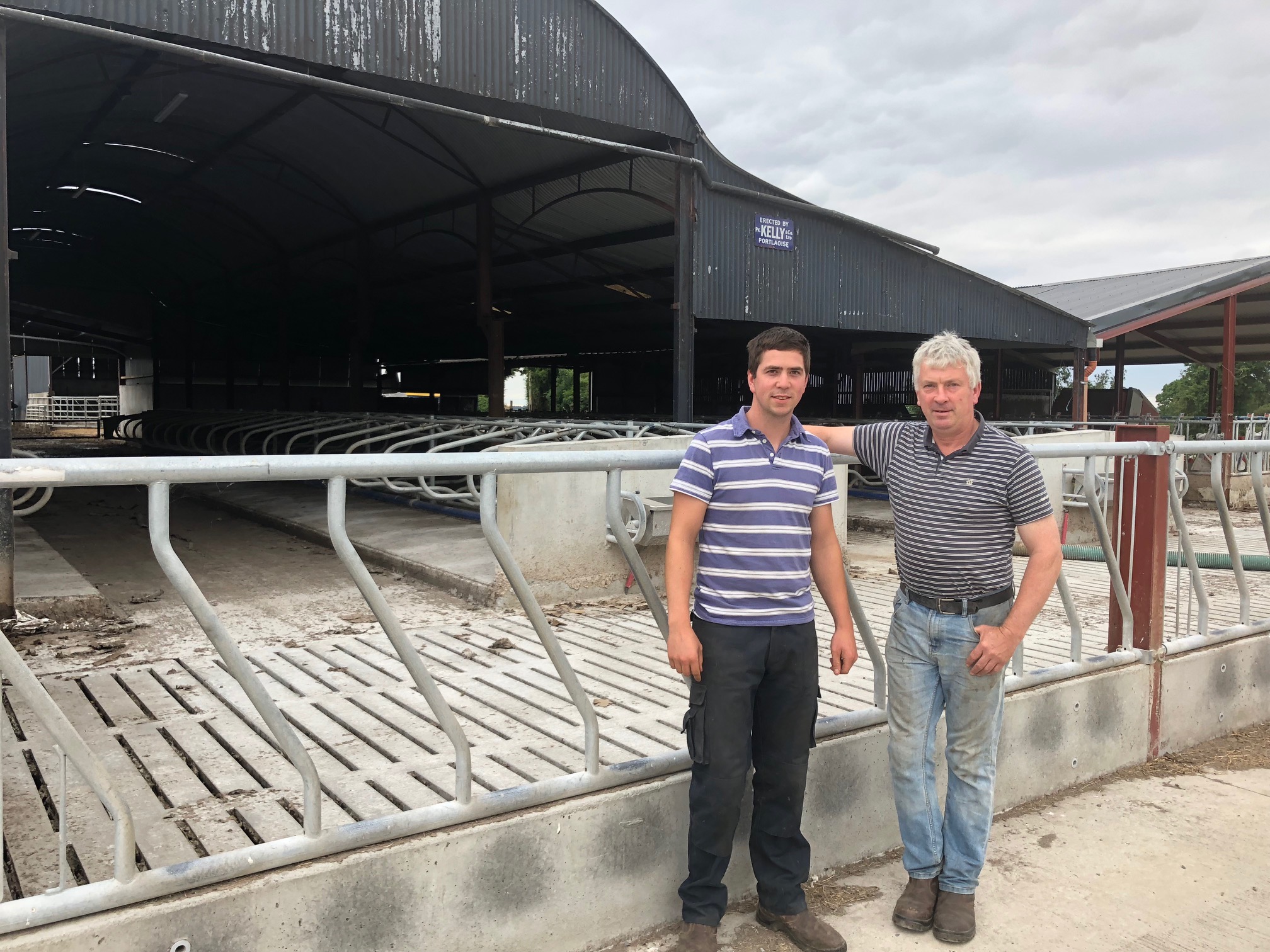 “Most of the local Lely lads come from farms with robots themselves and therefore they have great practical knowledge and experience in robot milking,” Ivan concluded.

John Downey was a new entrant to dairy in 2017, having previously had a pedigree Limousin suckler herd.

After starting with one Lely Astronaut A4, 75 heifers and 11 cows, John is now milking 154 Friesian cows on two Lely Astronauts, with one full-time employee – his former student Patrick Duffin.

John and Patrick’s intention is to go to 170 cows, with 130 calving compactly in the spring; adding cows as free time allows over the April-to-June period.

All cows milk over a 305-day lactation, leaving them dry for 60 days. The cows are housed full time and zero-grazed, with a paddock system behind the shed used as a loafing area for the summer months.

As the farm is fragmented, this system allows John to get the most from every acre.

“I swear by the zero-grazing system. It keeps the cows in good condition, as they don’t burn as much energy converting grass to milk, intakes are increased and there are no residuals to graze out,” John explains.

He added: “This summer has been a challenge, given the extreme weather conditions, and I have had to look at all options of feed type.” 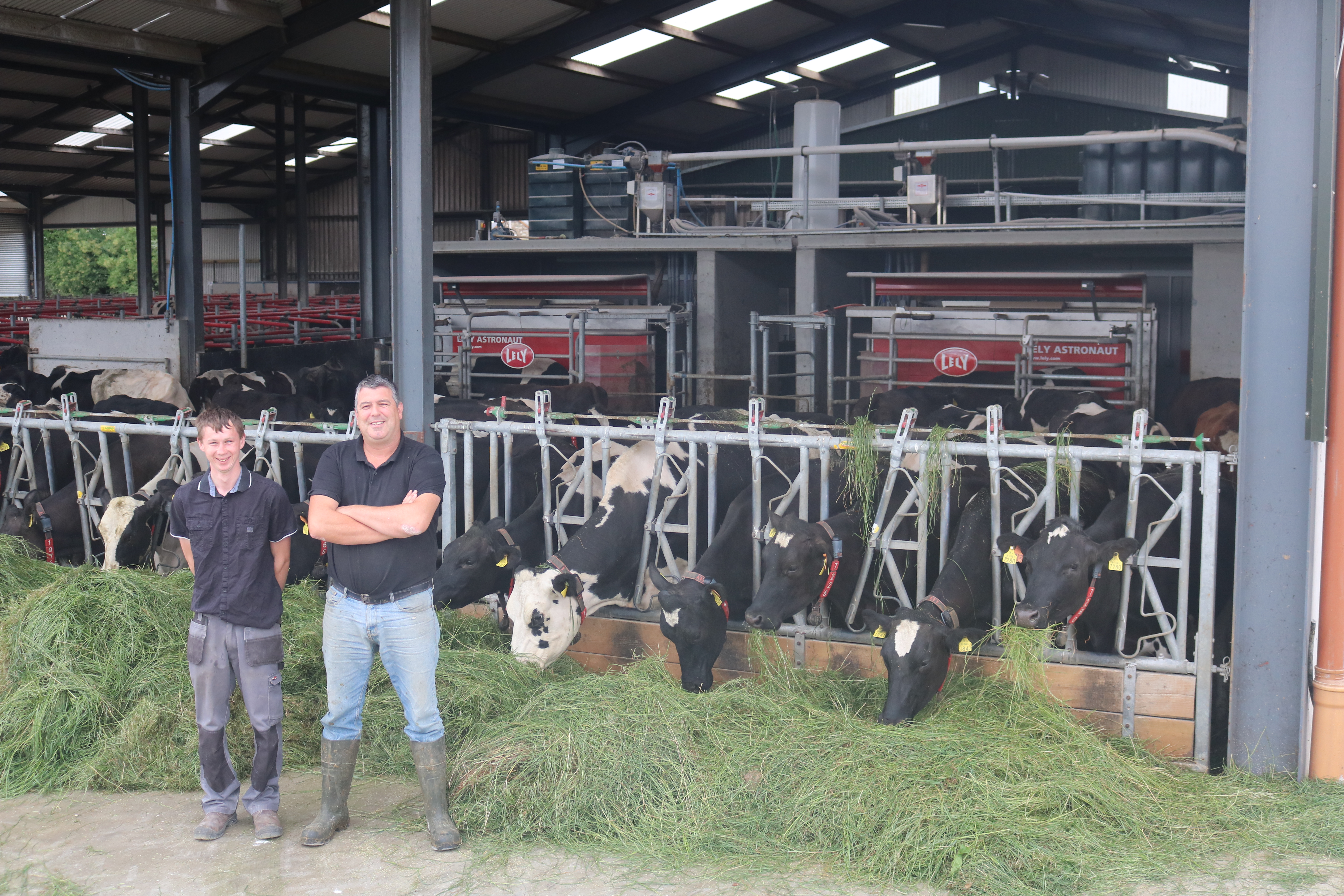 “The zero-grazing system compliments robotic milking, as it maximises the number of milkings and throughput. The robots also create free time for us for grass management, animal management and zero-grazing,” he said.

Our cow type is Friesian, with more Jersey influence intended for the future; our focus is on milk solids and trying to produce the invisible cow.

On why he chose the Lely robotic milking system, John said: “The information and feedback I get from the T4C management programme in relation to health, production and activity is like living with the herd 24 hours a day. It’s constant monitoring.

“We can now identify high cell counts, problem cows and slow milkers very quickly. All it takes is a few clicks of a mouse. I have the somatic cell count of every cow, every day, which helps with all the daily management decisions – including dry off.

“The robot’s health report is excellent, as it picks out cows that may be sick and ranks indicators such as: temperature; activity; rumination; milk drops; cell count and conductivity from 1% to 100%.”

Continuing, John said: “The Lely Free Cow Traffic system allows me to get more cows on the robot and is easier on the shy cow or heifer, as she comes and goes when it’s quieter.

Giving the cows control over when they’re milked speaks for itself in terms of output, as we have been getting 180 milkings per day out of one robot. It comfortably milked my 86 cows last year.

How have you found the transition?

“The support level from Lely is exceptional. Whenever I’ve needed it, an engineer has always been on the farm within an hour of me making the call. Lesser issues can be fixed over the phone,” John said.

“The FMS (Farm Management Support) from Lely is also top class. Their support has allowed me to push my system to its limits and I know that there’s always someone at the end of the phone to assist with grass, meal, animal husbandry, settings or any other queries,” he added.

“A main benefit with the Lely robotic milk system is that I am not tied to a time on the farm and working days – once the cows are calved – can be more flexible.

“I’ve no regrets for my decision to milk cows with the Lely Astronauts and zero-grazing. I look forward to pushing the system on even more over the coming few years. Grass and grass quality are what it’s all about,” John concluded.

The farm will be signposted from the main road (R357) and from the village of Rahan. For more information, contact Niall McGauran at: 086-4178424.