Co-ops which are setting the May milk price for supplies over the coming days have been told to take a leaf out of Dutch dairy Friesland Campina’s book and hold their milk price, by the IFA Dairy Committee.

IFA Dairy Chairman, Sean O’Leary, said that there is now clear evidence that international dairy markets are strengthening from their unsustainably low levels.

Co-ops have recognised on the record that they will continue to need to support milk prices, and in the short term, this has to mean holding for May milk, according to IFA.

“Cash flow is lacking on most dairy farms at this stage. The milk price is at a historical low and input bills, superlevy and loan repayments all have to be found from what are now negative margins on the majority of dairy farms.

“In this regard, the Glanbia Co-op cash flow scheme – Glanbia Advance Payment, GAP – is a very welcome form of support.

“We have made specific proposals that Minister for Agriculture Michael Creed must deliver on immediately, utilising state aid concessions to provide emergency finance to relieve all farmers from mounting superlevy and merchant credit pressures.

“Not all co-ops have the wherewithal to set up a scheme similar to the Glanbia GAP, but all must ensure they do not make a difficult situation worse by further cutting milk prices,” the Dairy Chairman said.

O’Leary said that this month, every member of the Committee has been, or will be, in contact with their local co-op board members and the management of their co-op to impress upon them the vital importance of supporting farmers through a lengthy period of low returns, which now at least appears to be coming closer to an end.

“They have also lobbied local TDs and other politicians to help secure the state aid based emergency finance scheme IFA has been advocating,” he said. 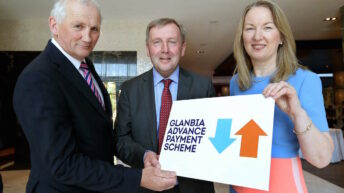