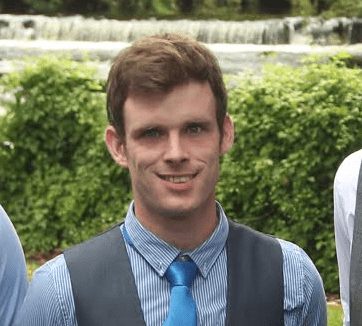 This year’s winner of this year’s Macra na Feirme/FBD Young Farmer of the Year is a farmer from Louth.

Jonathan Marry was chosen from six finalists today, which where whittled down from 28 regional winners.

Jonathan runs a 540 integrated sow unit, which has fattening accommodation for 800 pigs.

The farm is fully compliant with Bord Bia and EPA licenced and there are three full-time staff, including Marry himself.

He told the judging panel that his future plans include to go home milling and to become fully sufficient in building an extra 800 fattening places.

Bio security and keeping up to speed with the top genetics to optimise the farm’s productions as margins are getting significantly tighter, he identified as his key challenges.

“I participate in an a annual 80k charity cycle to raise awareness of suicide. I am a member of EPP (European Pig Producers) which we will be hosting in Dublin in 2016,” he told the panel.

The other five finalists for the Macra Young Farmer of the Year were:

The FBD Young Farmer of the Year awards is run by Macra na Feirme in partnership with the IFA. The aim of the competition is to recognise and reward the top young farmers in the country.

Entrants are judged according to a number of criteria including farm business initiative and innovation, levels of farm efficiency and enterprise quality, farm safety and environmental protection awareness, as well as agricultural knowledge and community involvement.

FBD Young Farmer of the Year Macra
Loading Next Story