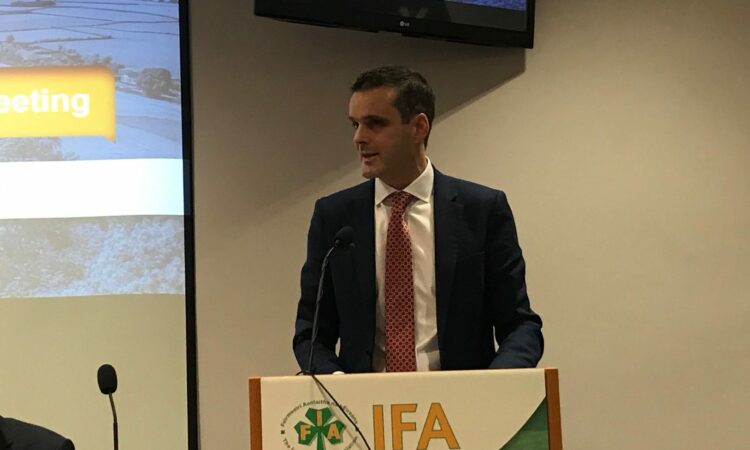 The debate on climate action has to “get real” about the role of agriculture, according to president of the Irish Farmers’ Association (IFA) Joe Healy.

Speaking at the 64th Annual General Meeting (AGM) earlier today (Tuesday, January 29), the president pointed to the efficiency of Irish food production relative to other European countries, due to the typical grass-based production system.

“It is an ‘inconvenient truth’ for some that Irish dairy farmers are the most carbon efficient in Europe and that our beef farmers are amongst the top five,” he said.

“With the world population expected to grow to 10 billion by 2050, the president noted that demand for beef will grow – therefore, cutting Irish beef output will simply see more beef produced elsewhere in places like Brazil.”

Healy followed this up adding that some European politicians wish to pursue a Mercosur deal while at the same time preach about climate action. This, he said, is just hypocritical.

“Farmers are fed up with taking the rap for every climate ill that exists, particularly as we have been doing so much to address the issue.”

The president noted that things are moving in the right direction, referencing that nine out of every 10 measures under the Common Agricultural Policy (CAP) have specific environmental or sustainability elements.

He highlighted that since 1990, Irish agricultural output has grown by 40% while GHG emissions have reduced.

“The Smart Farming programme that IFA runs with the EPA and others shows there are ‘win win’ opportunities for participants.

They have shown how to cut emissions by 9%, while improving their profitability by an average of €7,100.

From a Government level, Healy noted that the Oireachtas Climate Committee is due to report shortly, adding that Minister for Communications, Climate Action and Environment Richard Bruton will take to the floor tomorrow to discuss how best to move climate action forward.

“Teagasc has a roadmap that has 27 measures, which could reduce climate emissions by almost 9Mt (megatonnes). These measures will require further actions by farmers.

“It will not be easy, but IFA is willing to embrace the proposals which are based on scientific logic.

“We have written to Taoiseach Leo Varadkar and requested him to co-ordinate the Government Departments and state agencies in the delivery of this climate pathway for the sector.

What is most frustrating for farmers is the lack of balance in some of the debate.

“All the emphasis is on environmental sustainability without sufficient consideration for economic or social sustainability. Where would Ireland be, and rural Ireland in particular be, without farming and the agri sector?

“We will do more, but the Government approach must be more carrot and less stick,” Healy said.