Claas makes a big impression in 2013

Throughout 2013 Claas made a number of new additions to their product lines. Of note was its Axion 800 which was a big award winner this year.

Last March Claas gave its fans a sneak preview at the SIMA show of the new Axion 800 which is due to be launched later this year for sale in 2014.

According to Claas the new Axion 800 range is based upon the higher powered Axion 900 range launched this year and incorporates many of the design and technology features found on that tractor.

Like the Axion 900, the new Axion 800 range features a long wheelbase, with 50/50 front/rear weight distribution and a ‘wasp waist’ front axle design for an increased steering angle and optimum manoeuvrability. The new

The world’s most powerful tractor with an infinitely variable drive also featured at Agritechnica in 2013. The Xerion 4×4 large tractor series with over 500 hp has been given a new engine, a new look, greater comfort, and is now called Xerion 4000, 4500 and 5000.

Claas claim the Xerion has established itself firmly in both arable and specialist applications. This will continue with the new range, where the XERION’s main roles will still be heavy cultivation and slurry and digestate distribution, but also for use on the silage clamp and in other specialist appications such as woodchippers and mulchers.

According to Claas its proven TRAC concept has not been changed:
• Four wheels of equal size on steered axles with a tyre diameter of up to 2.16 m
• Infinitely variable ground drive up to 530 hp
• 50 km/h maximum ground speed
• Full frame design

A new feature of the new Xerion series is the cross bracing between the side members of the chassis, which is now bolted on rather than welded. This increases the load-bearing capacity of the chassis when used with heavy slurry tanks and implements.

According to Claas with its rounded design, the new Jaguar 800 model series is similar to the shape of the 900 series which means it too features a highly efficient air duct pipe for the cooling system and offers the driver good visibility.

The company say the large Vista cab comfort cab and CEBIS operating concept in the new Jaguar 800 also help to increase visibility, as well as providing the driver with greater comfort.
Another new feature is that the Jaguar 800 now has the option of being equipped with the multi crop cracker and a mechanical accelerator gap adjustment system to optimise the crop flow.

The 800 series will also have a mechanical quick attachment coupler and hydraulic flat coupler for quickly and conveniently attaching front attachments. Both model series now have a uniform interface for front attachments as well.

Claas also introduced the new Volto 1100, which it says is the world’s first three-point linkage mounted 10 rotor tedder. It has a working width of 10.70 m and features the newly developed Max Spread crop flow concept.

The new Volto 1100 achieves significantly higher outputs and demonstrates a greatly improved spread pattern, but at the same time is also particularly gentle in the way it handles the crop, so keeping leaf shatter to a minimum.

Claas says the tines on the new Max Spread crop flow concept are angled at 29.3 degrees and designed so that at all times they are either facing or crosswise to the direction of travel. As a result, the new Max flow concept enables the spreading arms to work 65% longer when aligned in the direction of travel. This results in an increase in the pick-up rate so enabling significantly higher working speeds.

According to the company by contrast, conventional tines act in opposition to the direction of travel for about half of the travel area, which limits forward speed. 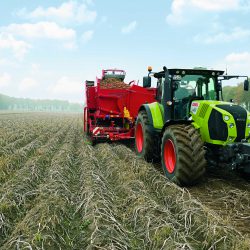 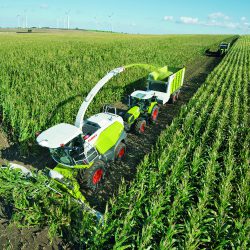 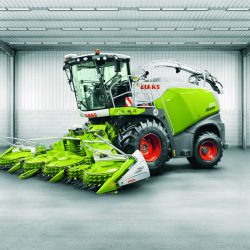 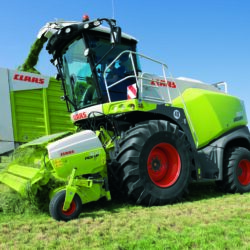 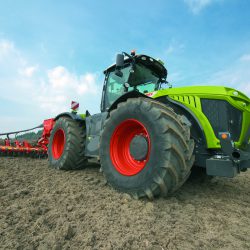 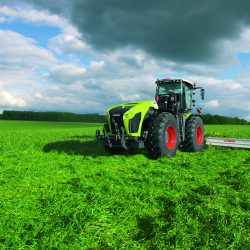 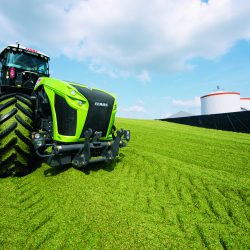 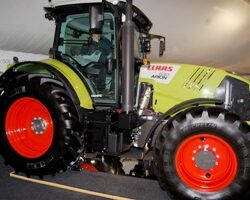 Pics: Farm clearance sale to be held online next week

Lakeland: ‘A fair reflection of a sustainable business is the number of new entrants’

Pics: Farm clearance sale to be held online next week

Lakeland: ‘A fair reflection of a sustainable business is the number of new entrants’