Claas comes out on top at Agritechnica 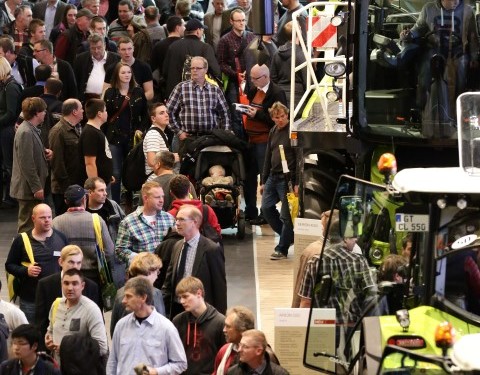 A 23-person jury awarded the most coveted Tractor of the Year 2014 to the Class Axion 850. This is awarded every year by an independent jury of selected agricultural trade journalists.

“Receiving this award is a very special moment for us,” stated Jan-Hendrik Mohr, managing director of sales division who accepted the award on behalf of the company. “The award is actually extra special because we are currently celebrating 10 years of Claas Tractor as well as our 100-year company anniversary.”

The ‘Machine of the Yea’ award is presented every two years by the technology editors of the Deutscher Landwirtschaftsverlag publishing house for the best innovations in agricultural technology. This year the Claas Axion 800 Cmatic was the winner. Explaining its decision, the jury stated: “The stepless transmission is operated using the Cmotion operating lever, which is one of the most ergonomic controls on the market. The CEBUS control terminal also allows the operator to make extensive adjustments. We particularly liked the simple engine/transmission management system. The easily adjusted engine torque function for various types of operation lowers fuel consumption and increases economic efficiency”.

Class launched the new Axion 800 in February at the SIMA trade fair in Paris and the first machines equipped with the Hexashift transmission are now also going on sale. Class say the range was extended with the launch of the new stepless transmission version of the Axion 800 Cmatic at the Agritechnica 2013 trade fair.

With the Axion 800 winning both the ‘Tractor of the Year 2014’ and the ‘Machine of the Year 2014’ awards, Claas feels this confirms they are following the right concept in its tractor division, which has a strong focus on economy, efficiency and comfort.