Cattle numbers remained steady in marts across the country over the past number of days as quality stock was easily sold, while plainer animals proved a little more difficult.

Numbers in Macroom Mart in Co. Cork dropped to 680 head for the sale on Saturday, November 26, down from an exceptional week of close to 1,000 head the week before, according to Mart Foreman Tim McSweeney.

“Prices were up this week as the trade improved, out of the 680 cattle at the sale I think only eight went home unsold, that says a lot about the sale,” he said.

There was a good mixture of farmer buyers and buyers from further up the country, including buyers for the Turkish export market, McSweeny said.

“The presence of the Turkish buyers made a real difference, he was missing last week and it was noticeable,” he said.

The Mart Foreman expects numbers to ease a little coming into the last three sales of the year, with numbers estimated to be between 450-500 head of cattle for these sales.

Good cattle were easily sold at the sale in Manorhamilton Mart in Co. Leitrim on Monday, November 28, according to Mart Spokesperson Wilfred Moffitt.

Numbers were down slightly due to the time of year, but trade remained steady overall, Moffitt said.

Heifers weighing between 400-550kg/head were making anywhere between €1.90-2.05/kg, as the lighter heifers proved to be a much dearer trade.

There was very few heavy bullocks on offer at the sale in Manorhamilton, with most lots of weanling bulls weighing between the 300-400kg/head mark.

Trade has firmed well over the past couple of weeks, with prices rising by close to €20-30/head week-on-week, Delvin Mart Manger John Gilligan said.

At the cattle sale on Thursday, November 24, just over 400 head of cattle went through the sales ring.

With regards to heifers, Gilligan said store heifers were making from €1.90/kg up to highs of €2.52/kg.

Delvin Mart provides a range of customers for all kinds of cattle, with a mixture of farmer and factory buyers, according to Gilligan.

Similar to Macroom, Gilligan expects numbers to ease slightly over the coming weeks with just three sales left until the end of the year. 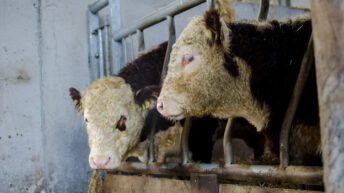