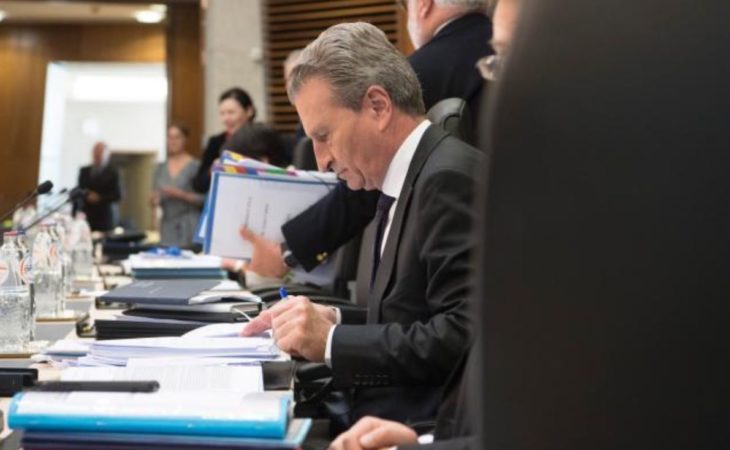 The Common Agricultural Policy (CAP) is being reduced by 5% under proposals presented by Gunther Oettinger, the European Commissioner for Budget and Human Resources, in Brussels.

Speaking at the unveiling of the European Union’s proposed next multi-annual financial framework (MFF) budget – running from 2021-2027 – Commissioner Oettinger has proposed that direct payments are to be reduced by circa 4%.

It is believed that the total EU budget for the seven-year period is €1.270 trillion. It is understood that this translates into 1.11% of the EU27’s gross national income (GNI).

CAP represents almost 40% of the EU budget – or some €59 billion each year. One of the biggest criticisms of the EU’s flagship policy is that 80% of CAP funds go to 20% of farms.

The looming exodus of the UK – a net contributor to the EU – from the European Union is expected to result in a staggering shortfall of €12 billion annually to the overall budget.

Speaking in Kilkenny recently, EU Commissioner for Agriculture and Rural Affairs Phil Hogan warned that the scale of the challenge in relation to defending the CAP is “unprecedented” this time around.

“The European Commission is not like a national government – it cannot run a deficit, so we are bound by budgetary constraints.

“Meanwhile, Brexit is blowing a €12 billion hole in the overall European budget – and other priorities such as security, migration and defence have grown in prominence in recent years. Another €12 billion is demanded by many member states to ensure delivery of those policies too.

Therefore, in many quarters, the CAP is viewed as the obvious target for cuts.

Commissioner Hogan previously stated that both he and his team have faced an “uphill race” to protect the current CAP budget.

He explained that member states have the possibility to make up the shortfall by contributing a higher percentage of Gross National Index – a point which he said he has “strongly” stressed to heads of state and agriculture ministers across the EU.

“But we need to be realistic; in the absence of more money from member states, there will be a cut to the CAP budget, and there’s no point trying to sugar-coat that fact.

Commissioner Hogan has repeatedly outlined that his priority is to protect small and medium-sized farmers, who remain “the backbone of Europe’s food production and rural communities”.

The bottom line is that farmers’ incomes must continue to be supported. This is the role and duty of the CAP, as outlined in the founding treaties, and those treaty objectives remain as relevant today as they ever did.

“I also give you my word that I am doing everything in my power to protect the CAP budget. The CAP is a European success story, and I want that to continue into the future – but this success is built on farmers being rewarded for their work,” he said.

Commissioner Hogan is expected to make a statement on the future of the CAP budget in Brussels this afternoon. Stay tuned to AgriLand for all the latest updates.