Calf-rearing: ‘I don’t want the calf to ever know I’m not here’

Reducing heifer calf mortality could lower costs and improve profitability on many UK and Irish dairy farms; yet on some farms, heifer mortality remains as high as 50%.

Delegates at this afternoon’s Women in Dairy conference heard how it takes as long as 3.6 lactations (or six years) for the average dairy heifer to pay back her rearing costs.

Ailsa Milnes, a veterinary adviser for Boehringer International, and Karen Halton, from Halton Farms, led the session on fine-tuning calf health, which encouraged female farmers to improve profitability through marginal gains in calf-rearing.

“There’s a lot of data about calf health,” Milnes said.

“We know with dairy and beef the young calf is an absolute investment. Heifer-rearing represents the second-largest variable cost on dairy farms apart from feeding.

AHDB [Agriculture and Horticulture Development Board] figures indicate the cost varies by farm with the average cost around £1,800 to rear a heifer and yet heifer mortality on some farms is running high with nearly 50% of heifers not reaching that first lactation.

“This is where our business starts, so our future begins here,” Halton said.

“It’s really important for us to get this bit right. This is probably where we are going to save the most money by getting this bit right so that the heifer goes on to have good longevity and be a really profitable part of our business.”

Milnes reminded farmers of the importance of hygiene early on because of the calf’s open navel.

“What you’ve got is a very, very vulnerable individual and preparations are chief in trying to get the best early start for them,” she said.

Halton runs a 560-cow dairy farm in Cheshire, calving all-year-round. As result, she relies on a team of staff to help her run the farm. 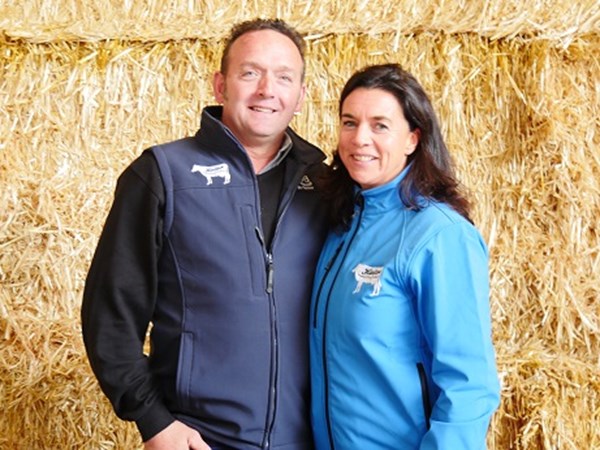 She explained she works with staff to establish clear protocols and processes to ensure every calf is treated the same.

Sometimes there’s maybe a conference on and both Grace [Karen’s assistant calf-rearer] and I are both away from the farm on the same day, but I don’t ever want the calf to know we’re not here.

“I don’t want them to ever feel the difference,” she explained.

“Rearing calves well is massively down to consistency – even things like the temperature the water is at when we’re mixing milk powder we try to keep consistent.”

One step is to keep a kit with gloves, paper towels, water, emergency contacts ready at all times.

“Nobody’s got to go around the farm looking for things,” she said. “We’ve also got everything for milking sitting ready too. We’ve even got teat dip sitting on the wall.”

She also asks staff to collect extensive data on each calf, including:

She explained the data helped her to get to the root of problems quickly.

“So if it goes on to be sick, we can look back and see why. We’ve got a reason for what’s happened on-farm,” she said.

“Say if we have a case of Jontil, if it’s born in the middle of the night we can see it was born in the big yard – ok, it was four hours before it had its navel dipped.

We use that information to build up pictures. We don’t really get big navels, but if we did, I’d look back and see is the area clean enough, are we dipping the navels on time, is the navel dip any good?

She encourages a bit of competition among staff by using the results of random blood tests taken weekly by a vet to run a league board among staff to see who got the calf to ingest the most colostrum and setting a forfeit for the person who scores the lowest.

“Anybody that got the lowest result would have to buy the person who scores highest a present – it doesn’t have to be anything big, it could have just been a cream cake or a cheap bottle of wine. It didn’t matter, but because it engages people – nobody knows when the vet is going to come.

It just really makes people focus on it and up their game a bit – everyone wants to be the best at what they’re doing.

“And it’s great for us too because it means we can monitor how well we are doing so it’s so important that we do those blood tests.

“If we’re reviewing data and we’re not happy, we will change it. We’re not frightened to admit if we have failed at something,” she added.