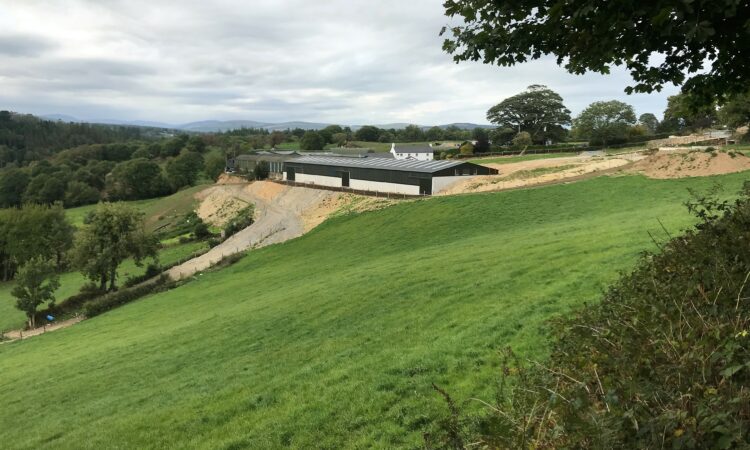 In this buildings focus, we travelled to Shroughmore, Co. Wicklow. Tucked away neatly in the landscape lies Robert, Mervyn and Robbie Bradshaws’ farm.

The trio – who operate under the company name of RM & R Bradshaw – milk approximately 300 cows and produce milk all year round.

All of the cows in the dairy herd are bred to beef sires – both by AI and the through the use of stock bulls. All offspring are finished on-farm and replacements – for the dairy operation – are sourced off-farm.

Robbie (23) heads up the dairy side of the enterprise and has a target of 400 milking cows in his sights. The plan in the future is to grow the dairy operation and to phase out the beef enterprise. 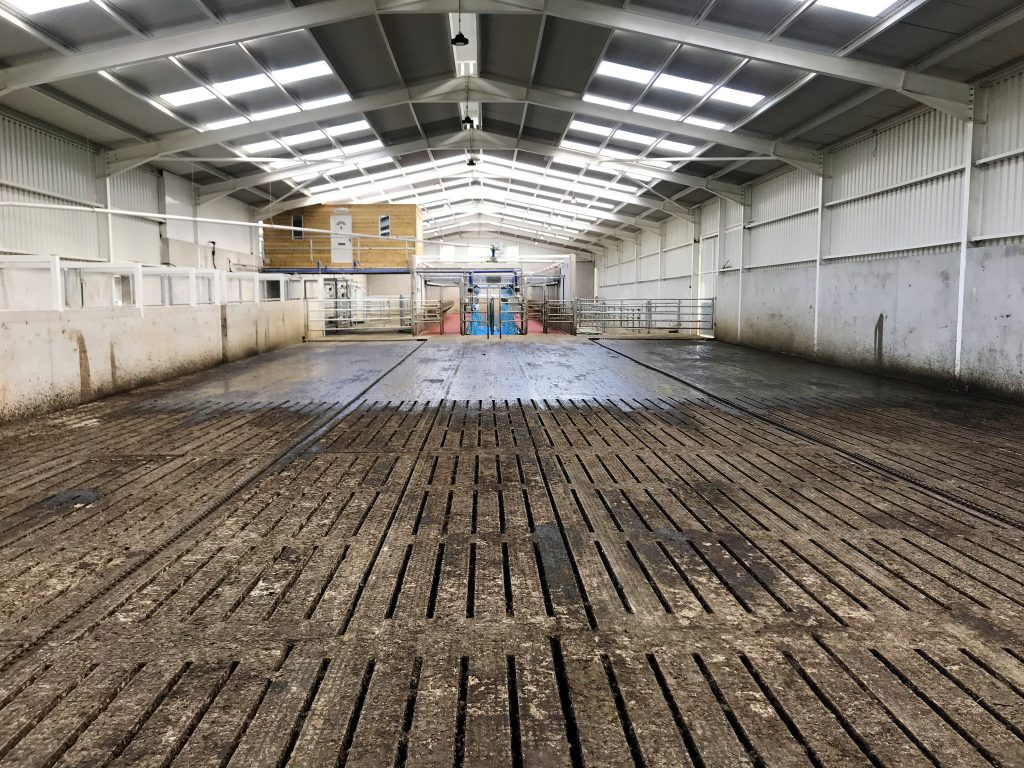 However, when the herd increased to 300 cows this year, milking was taking 4-4.5 hours and the original collecting yard had a capacity of 120 head; cows were held in sheds until there was room for them in the yard.

“We were looking to do something with the parlour for the last four years. Originally, we were planning to put an extension on the front of the old parlour, but the parlour was on an angle,” Robbie explained. 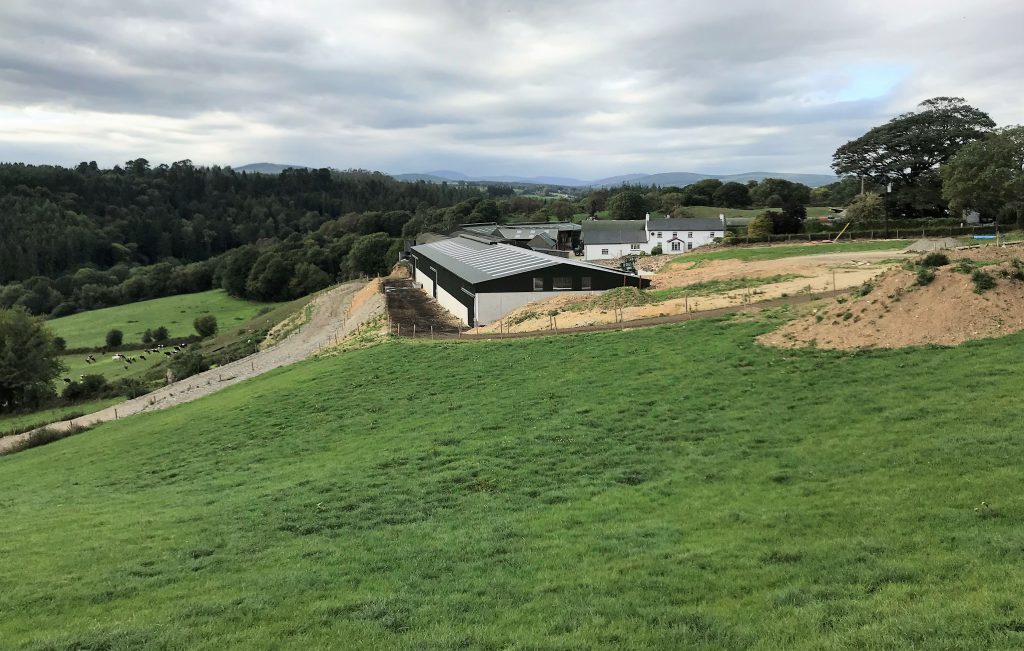 “The more we looked at it, the more we knew we couldn’t make it work. We could have extended the parlour, but then we would have been caught with a collecting yard.”

Therefore, the decision was made to move to a greenfield site adjacent to the original yard. This provided ample room and will also pave the way for 90 new cubicles where the old parlour and collecting yard were located.

Deciding on a milking parlour

Robert, Mervyn and Robbie left “no stone unturned” when it came to planning the new build. Robbie said: “We were unsure of what road to go down, whether a 20-unit, 40-unit, 20-unit double-up or a rotary was the way to go.”

However, the Bradshaws decided on a two-year-old, second-hand, 30-a-side, double-up Delaval parlour, equipped with milk meters, ACRs and automatic feeders with a feed-to-yield system; the parlour was sourced from Northern Ireland.

A Delaval drafting system was also purchased – something that was absent from the old milking parlour.

When the parlour and drafting system were sourced, Aidan Kelly – from Agri Design and Planning Services (ADPS) – was called in to draw up a design to house the milking parlour and collecting yard. 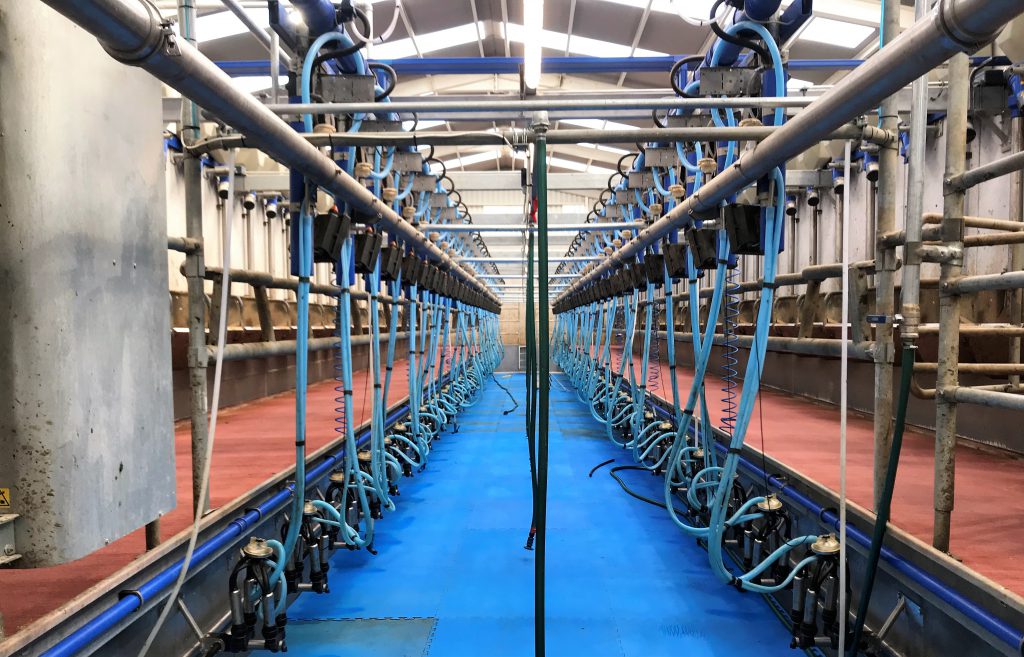 “We wanted everything under the one roof – the milking parlour, the drafting system, a herringbone crush and the collecting yard,” Robbie explained.

The new parlour and design have given the team a new lease of life. They are currently milking 276 cows and these can be milked with the machine and parlour washed comfortably in 1.5 hours; this is with two milking.

As the Bradshaws wanted everything under the one roof, Aidan needed to design a structure with excellent cow flow and sufficient slurry storage. The project also had to have enough room for the drafting system, crush, herringbone crush and collecting yard.

The dairy – which holds the 22,000L bulk milk tank, filter sock and plate cooler – is located at one side of the unit. Another ‘room’ holds the milking machine, water-heating system and toilet. These areas are finished with white PVC walls, which are easily cleaned.

A stairwell is also located here which provides access to the office – giving a bird’s-eye view of the operation. An area is also allocated externally for water tanks and a gas tank.

The herringbone crush is located along the right-hand side of the unit. Many tasks can be carried out here – from clipping tails to AI – and electrical sockets are located at numerous locations.

Wash-down hoses are also located here and floors are sloped to a drain, which runs to one of the slatted tanks in the collecting yard; the herringbone crush area is 4.7m wide.

Cows can also pass through the drafting system on the left-hand side of the parlour. Here, cows can be drafted for AI or buffer feeding; this had to be done due to drought conditions this year.

This area measures 5.9m in width and also has wash-down hoses and electrical sockets. When the cows pass through the drafter, they also walk through a foot bath. 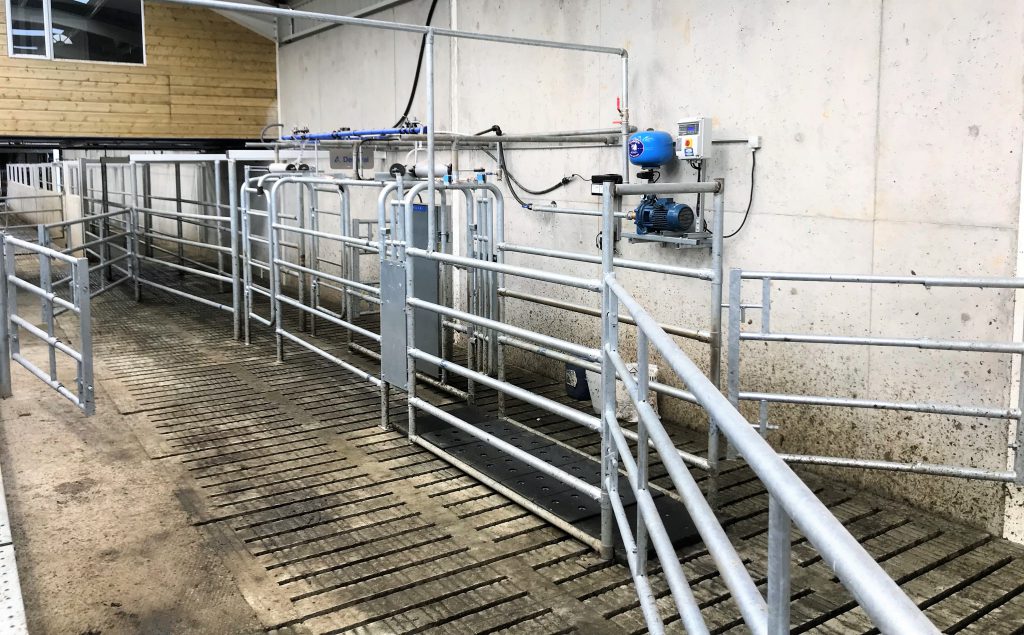 A crush also runs alongside the drafting area. Two races (passageways) direct cows either into a slatted shed or back out to pasture.

The parlour and collecting yard

One thing that is evident when you enter the building is how much natural light there is throughout the unit; two full-length skylights per bay – over the milking area – allow this, while there are four skylights per bay over the collecting yard. The steel and agri-perlons are also painted white.

The width from feed trough to feed trough measures 6.3m and the pit is 8.6ft wide. The collecting yard measures 34.2m long and 14.5m wide.

An automatic scraper – which doubles as a backing gate – keeps this area clean. However, the Bradshaws noted that cow flow through the yard and into the parlour is excellent. 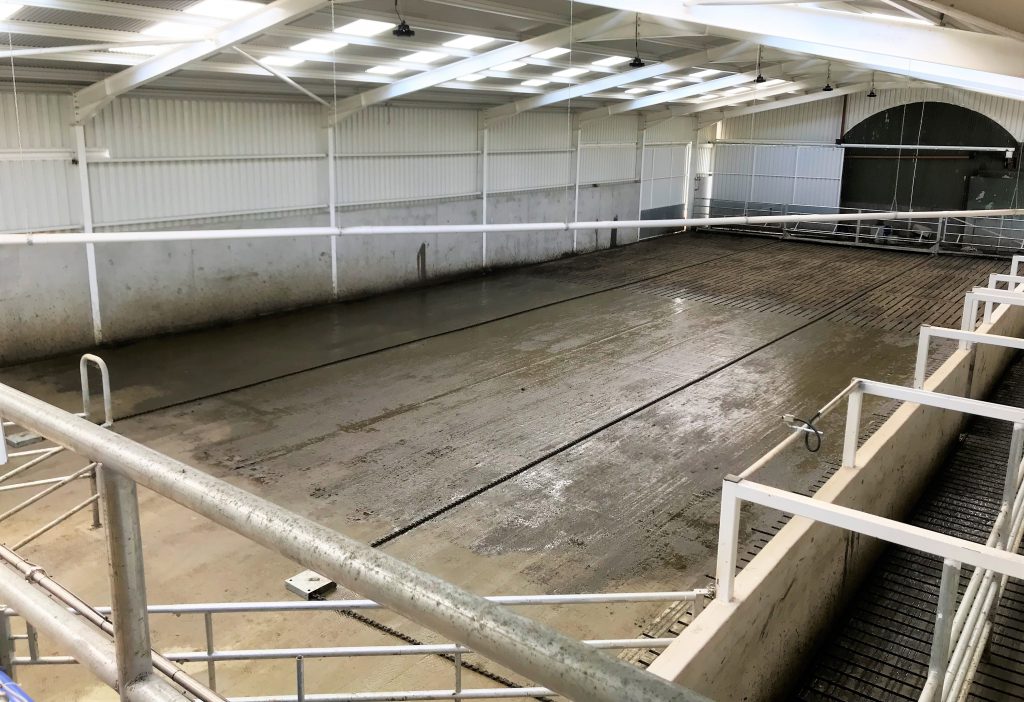 Numerous sliding doors are located throughout the unit; cattle enter and exit through these depending on which grazing platform they have been allocated to. An underpass allows the cows to access the paddocks located on the other side of the road.

Water for the wash-down hoses and plate cooler is sourced from a gravity supply and a 7hp pump allows two operators to wash down at the same time. The water used to wash the bulk tank and the machine is supplied by an on-farm well.

All-in-all, there are four slatted tanks located throughout the unit. The first tank runs along the length of the structure (internally under the drafting area and passageway to the slatted shed). This is 51.2m long, 12.6ft wide and 9ft deep. 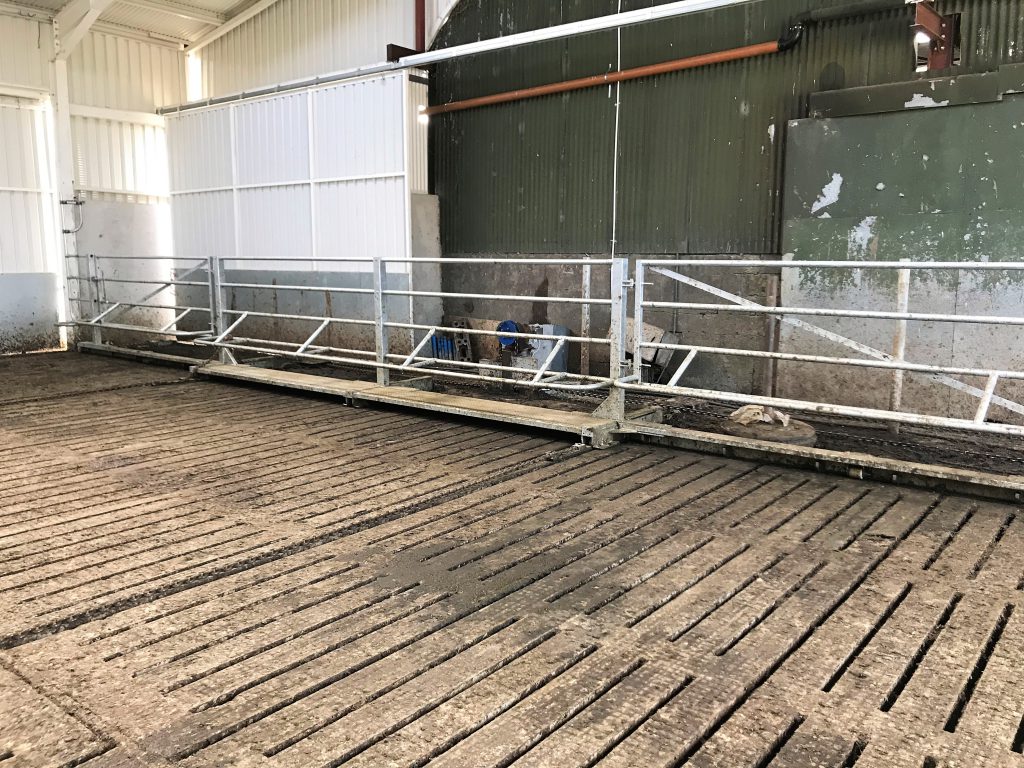 Triple slatted tanks are located in the collecting yard. These are identical tanks and measure 20.8m long; 16.6ft slats were installed and the tanks are 9ft deep. These provide plenty of slurry storage for the expanding herd.

Preparations for the build on the greenfield site began on November 19, 2017, and the first cows were milked in the parlour on the August bank holiday weekend, 2018.

The extreme weather conditions throughout the winter and into the spring of this year slowed progress; however, they noted that all the contractors that were involved were great.

“We put a lot of time into planning; we worked out every scenario. We planned for weeks, months and days. It took us all of the summer of 2017 in the yard with the builders planning different options. Aidan Kelly did a fantastic job,” Robbie explained.

The new facilities will pave the way for more AI usage; it also allows the beef cattle to be handled more efficiently.

Commenting on the build, he said: “I wouldn’t change one thing so far; this has given us a new lease of life.

“I’m delighted with the parlour. I won’t say a rotary is out of the question in the future, but – at the moment – it’s not on our minds. The shed was designed so a rotary could be installed if needs be in the future,” he concluded. 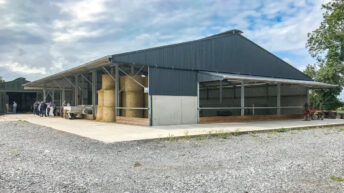 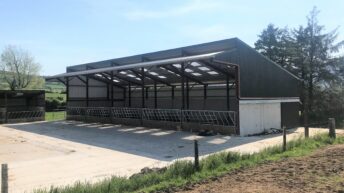