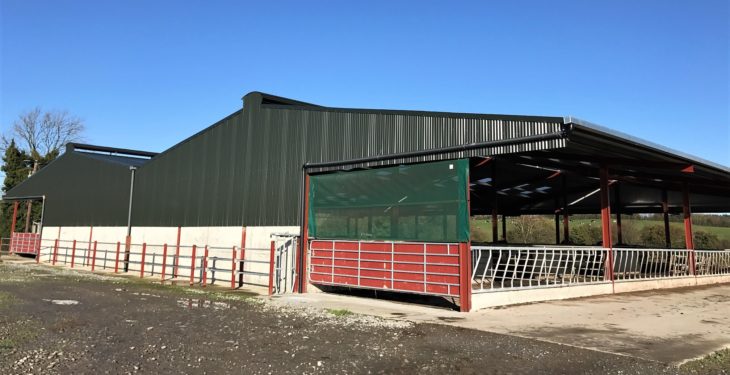 “More cows; more money. We knew in 2015 it was time for change. We used to out-winter heifers but, to be honest, it was absolute hardship – we needed a cubicle shed.”

That’s what Adrian Claffey told AgriLand this week, when we called to have a look at his 147-cubicle slatted house.

Farming in Nahad, Mount Temple, Co.Westmeath, the Claffeys are currently milking a herd of 193 Holstein Friesian cows under a 60:40 split, spring-calving and autumn-calving system.

Adrian farms in partnership with his father Seamus. “There is a lot of work to everyday. The shed has been an enormous help to us – it has definitely made my life easier.”

Before attempting to build the shed we had a look at a number of different sheds in the local area; we wanted to see what type would best suit our system.

The shed was started in 2015 with the construction of one tank. However, the project was put on hold until 2016, when it was finished completely.

It contains four, 24ft long slurry storage tanks. Each tank is 16.6ft wide and 8.6ft deep. There are four slurry agitation points located at either end of the shed.

“I don’t think I’ll ever run into slurry storage difficulty. I think I’m well covered in that area, especially with the over-ground permastore that we also have.” 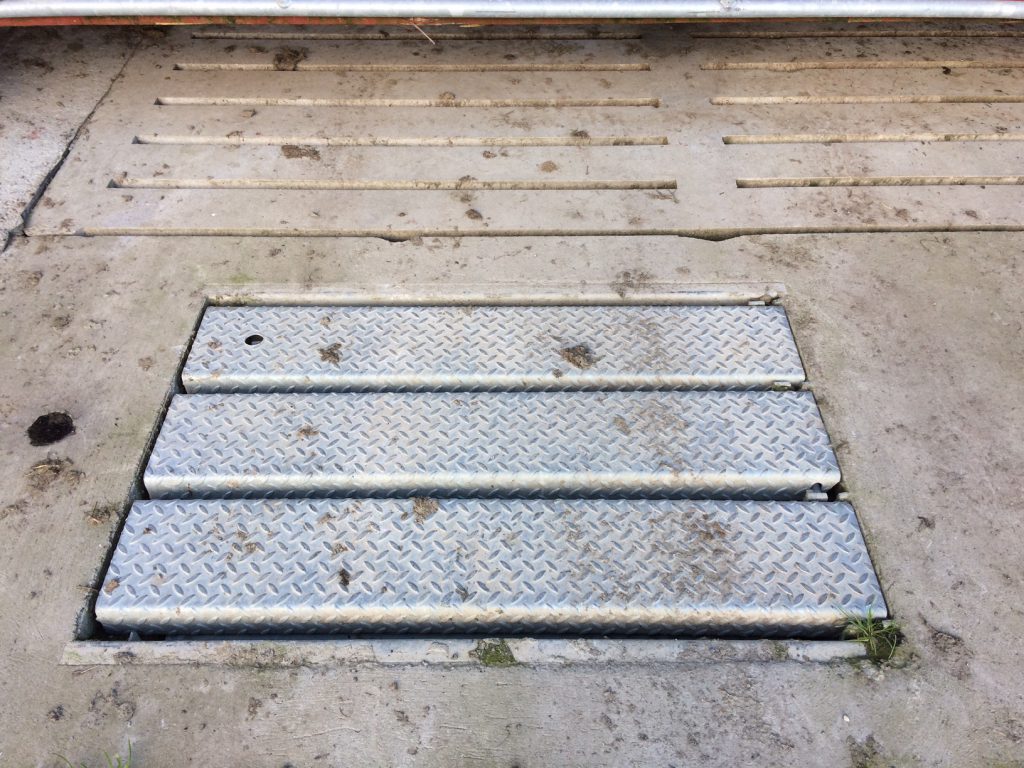 A big emphasis was placed on accessibility to the slatted house. It can be accessed from four separate points – two main gates and two feeder gates.

It’s handy to have the feeder gates, as I can get a cow out easy if needs be.

The shed also acts as a holding pen for the cattle crush, which is located along the gable wall.

“It’s a great job. I can let the cows into the crush via one end and then direct them back in the other end, while keeping them separate all the time.”

It’s really handy, especially if I’m handling them on my own.

“I built the cattle crush myself and I still have to finish painting it. It works well – it’s cheap and cheerful,” he laughed. 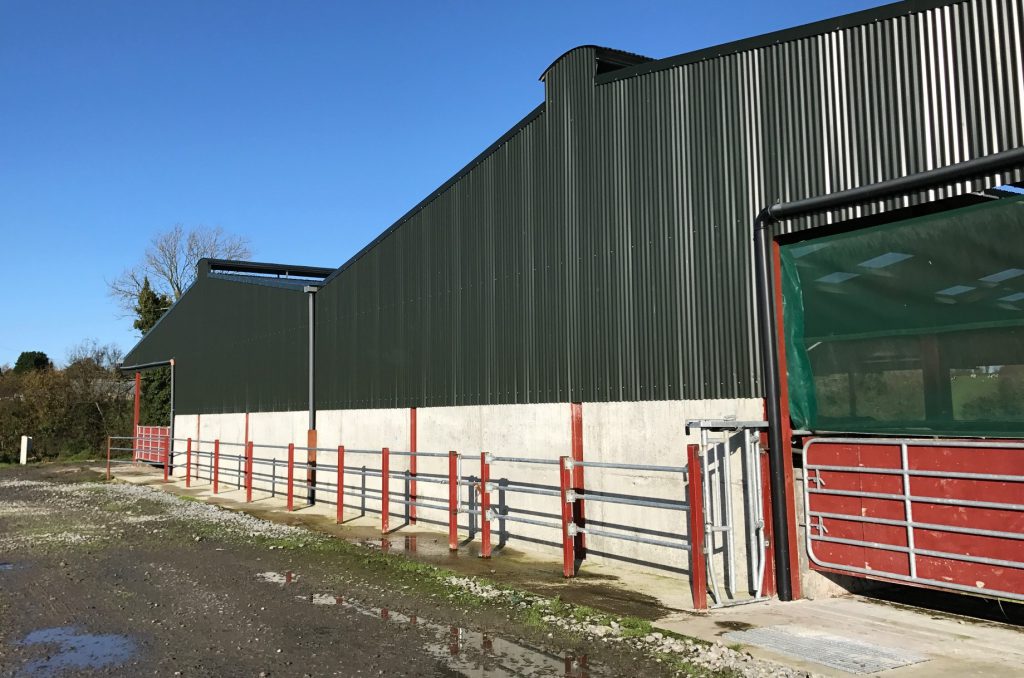 Claffey also constructed some sliding bars, at the end of each bay, to make life easier for himself when moving cattle around the shed. 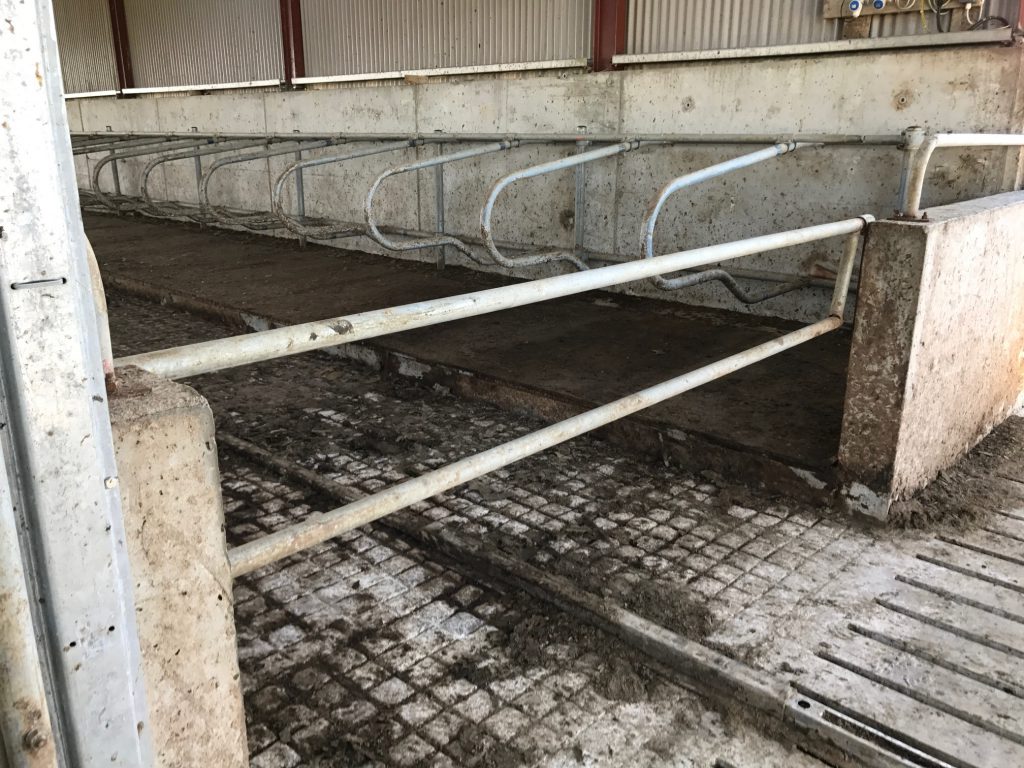 There is plenty of light in the slatted house, with four skylights installed per bay. However, no artificial lights have been installed yet.

“I’m waiting on the electrician to come back to me. I suppose with the evenings becoming darker I should probably give him a phone call,” he laughed.

The shed is very open and it has no sheeting apart from the gable end, where the crush is located. However, Claffey is happy with this aspect.

“Some lads might question the ‘open plan’ style of the shed; I think it’s great for ventilation. The cows are never ‘huddled up’ and the mats are always dry,” he said. 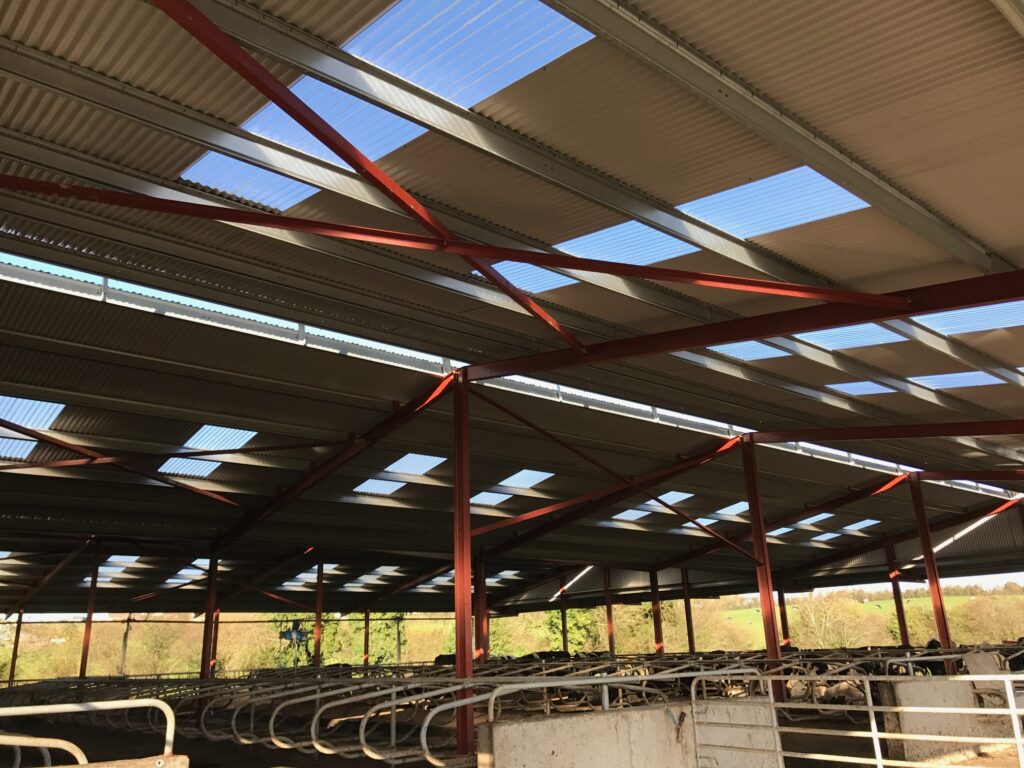 The passages are 10ft wide and are kept clean by automatic scrapers – one per bay. “Originally we didn’t have the scrapers installed. We used to scrape it with the bobcat.

“I went off to work on a dairy farm in New Zealand for a few months and when I came back the scrapers were in. I guess my father saw how much hardship was involved.” 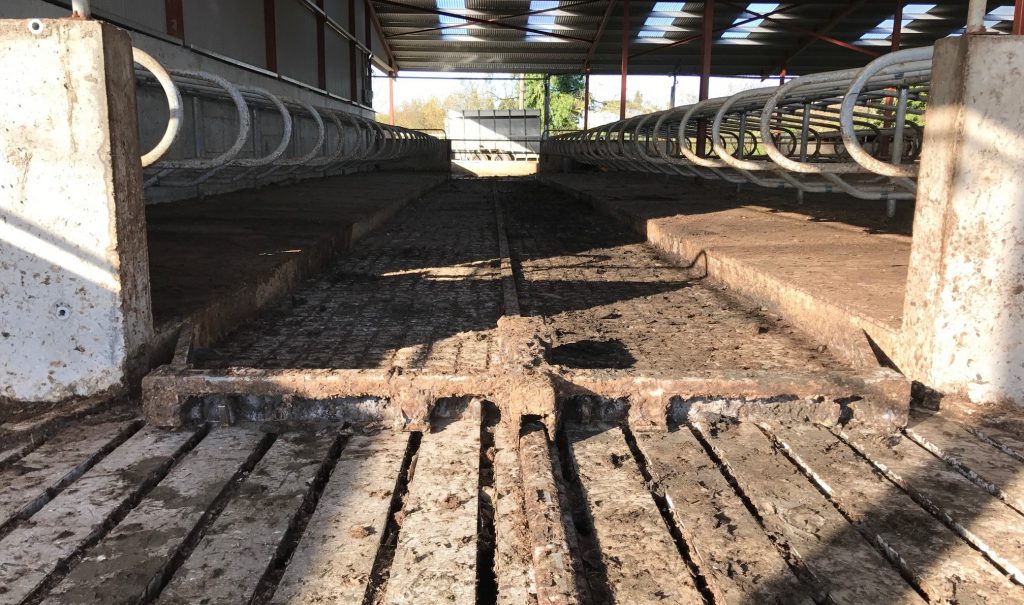 A concrete ‘lip’ behind the feeding barrier allows the cows to feed easily. It also prevents the build up of dung between the wall and the scraper. 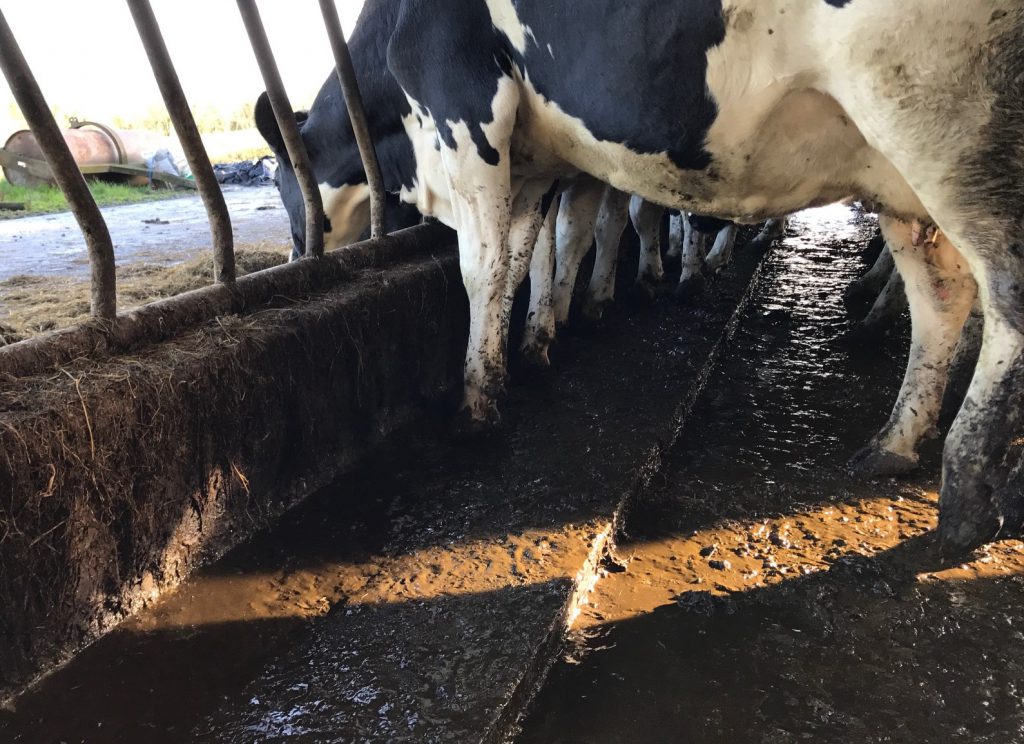 Each bay contains 21 cubicles with rubber mats. During the winter they are bedded with sawdust.

I spread the sawdust with the bobcat and I can get around the shed in a couple of minutes. 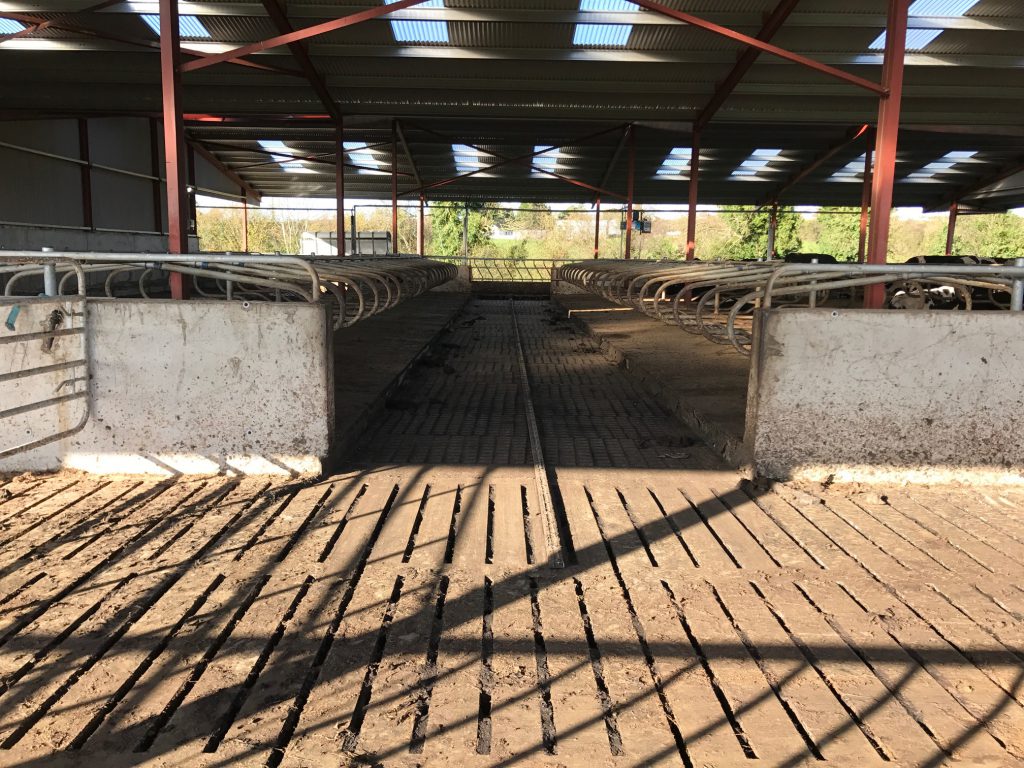 Each bay contains two water troughs – one at each end. The water troughs are easily cleaned and can be emptied by simply releasing the pin and tipping the ‘bucket-like’ trough over. 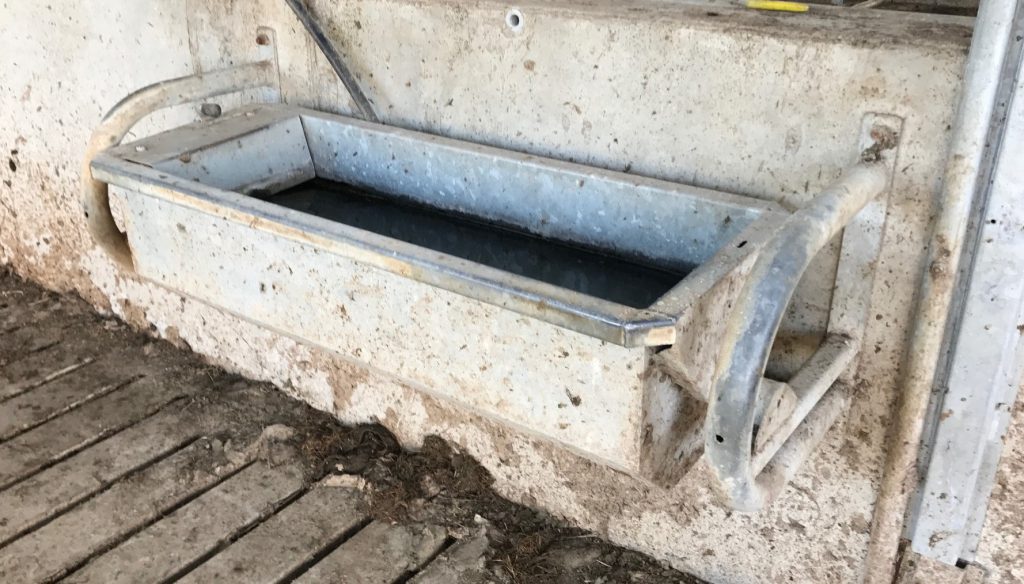 It’s a lot of money, but we will get the value out of it. I didn’t use the grant this time. I hope to use that for a new milking parlour in the coming months.

All the groundwork was done by local contractor, Noel McDermott. The shed (steel and galvanise) was supplied by Killbeggan Steel, which came shot-blasted and primed and it was painted by Claffey himself.

The water troughs; automatic scrapers; mats; and cubicles were all supplied by Alfco Engineering, while the feeding barriers were supplied by Condon Engineering.

“I’m extremely happy with the shed. But, if I was to change one thing, I’d maybe make it bigger,” Claffey explained.

“We’re alright for the minute but you have to keep looking down the line; where will we be in five years time?

I’m stocked at 4.2LU/ha at the moment because I’m tight for land. I have to be as efficient as I can be. But you never know what will happen – some land could come up.

This shed is just one of the many projects that have been undertaken by Claffey in recent times. New troughs have been placed on the grazing platform along with making some improvements to roadways.

He also aims to reseed 10% of the grazing platform every year.

There are provisions in place for a new 24-unit milking parlour to be constructed adjacent to the shed. Claffey hopes to get this started soon and to be milking in it come spring 2018. 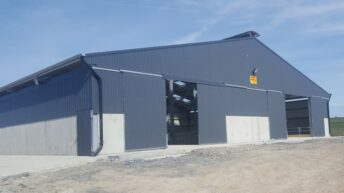