Sterling has weakened by 18% against the euro since the Brexit vote was taken in the UK, according to IBEC Agri-Food Analyst Paul Kelly.

This has contributed to the €500m that has been wiped off the value of food exports from Ireland to the UK during the second half of 2016, he said.

“And the exchange rate issue might have been a lot worse for Ireland had Donald Trump not been elected as President of the United States.”

Kelly was speaking at a recent Brexit briefing in Ballina, Co Mayo. He confirmed that the recent exchange rate movements involving Sterling and the euro were not cyclical in nature.

We are now talking about structural change, a development which the Irish government must react to in terms of it making stabilisation funding available to exporting businesses.

“Proposed changes to the UK’s tax regimes, post-Brexit, will also act to increase the relative competitiveness of Irish companies exporting goods and services into the UK.”

Kelly said that funding levels for organisations such as Bord Bia must be increased during the period ahead. Where Brexit is concerned, he made it very clear that transitional arrangements must be put in place, which could pave the way for a free trade deal between the EU-27 and the UK down the line.

“If no agreement is reached then WTO default trading tariffs will kick in. Where beef is concerned, this would put shift the current 85p exchange rate between Sterling and the euro out to the equivalent of £1.35.

“And, within this scenario, the impact on the beef sector would be traumatic.”

Kelly also pointed out that Ireland’s agri-food sector must succeed in bringing as many young graduates as possible with a science and technology background into the fold.

“And this is particularly so in regions such as Mayo, where farming and food is so important to the local economy.” 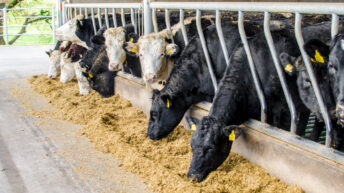