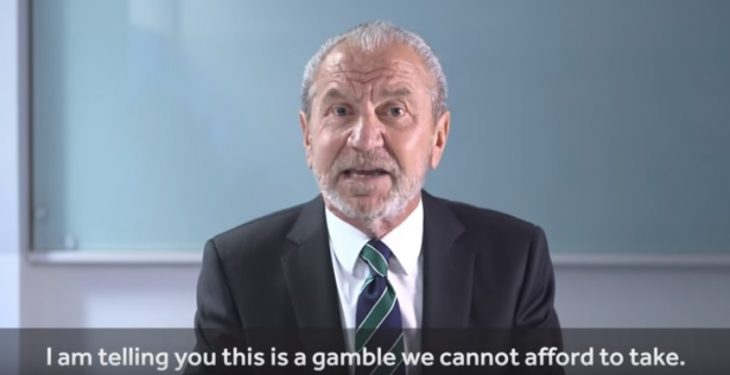 Brexit is a gamble that Britain cannot afford to take  Lord Alan Sugar of the TV show The Apprentice has said as part of the campaign to remain in the UK.

There is under three weeks left until Britain goes to the polls in a referendum to decide on its future in the EU.

In a video for ‘Britain Stronger in the EU’, he said that he has no personal agenda and that he doesn’t want to see a “massive mistake being made by the younger generation or indeed any of the generations who just simply do not understand the ramifications of leaving the European Union”.

“Let me put in it very plain terms, this is not a general election, this is not something that’s going to come round in five years time, oh, it didn’t work, okay well we’ll have another vote, no.”

No, this is the most serious vote you most probably will ever make in your lifetime.

Sugar said how he built up his own business from an early age, how he started manufacturing and he was then able to sell those goods in the EU.

“You couldn’t be listening to a bigger gambler than me, I’ve gambled all my life in business, okay, and I am telling you that this is a gamble we cannot afford to take.

“Now I’ve been in business for many years and I’ve seen plenty of daft ideas and duff proposals in my time and Britain leaving the European Union is one of them.”

“All they give us is some rubbish about being like Norway or Canada or even Albania; it’s hardly reassuring.”

You don’t have to be a rocket scientist to work it out, less trade plus less investment plus lower confidence equals fewer jobs, lower wages, less growth and a weaker country.

“Now granted, the EU is not the perfect place, far from it, but you don’t sort something out by running away from it, you stick at it and you make it better and you take advantage of what it offers.”

Concluding he said that he’d hate to see Britain throw away its economic strength and asked those voting on June 23 to use their vote and “for the sake of Britain today and tomorrow, vote to remain”.