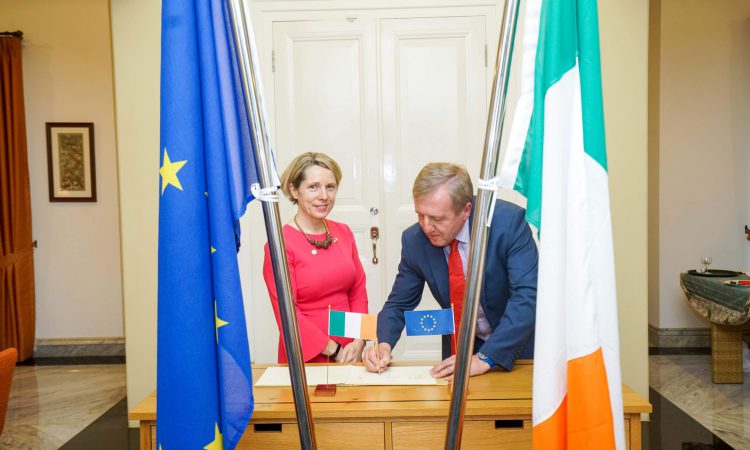 Bord Bia launched the South Korean phase of its new €3.9 million EU Pork and Beef campaign in Seoul today, building awareness of Ireland as a supplier of high-quality, sustainably produced beef and pork.

Under the slogan, ‘Enjoy! It’s from Europe’, the three-year campaign covers South Korea, Vietnam and the Philippines and targets a combined population of 250 million people.

To launch the campaign, Bord Bia invited over 100 Korean food industry representatives including top importers, distributors, wholesalers and influential chefs, as well as media with a combined reach of up to 4.2 million people to an EU Pork and Beef seminar in Seoul featuring presentations on Irish pork and beef production.

Speaking at the event, Minister for Agriculture, Food and the Marine, Michael Creed, said he was delighted to see Ireland at the helm of an industry programme aimed at raising awareness of European pork and beef as a high-quality product.

“The project aims to build and strengthen awareness of Europe’s high standards in the production of quality pork and beef – particularly those from Ireland,” said Minister Creed.

“This campaign ties back to Food Wise 2025 – our industry-led plan for the agri-food sector that foresees a sector that acts more strategically and achieves a competitive critical mass in the international marketplace.

“It will also aim to build a positive image in those markets of Ireland as a trusted partner.”

Tara McCarthy, Bord Bia chief executive, said that heading up this EU campaign is recognition of Ireland as an exporting country with a strong history of promoting and supplying quality beef and pigmeat that is sustainably produced.

“We submitted a strong proposal to win this contract to head up the campaign because it gives Irish exporters access to food buyers in our priority markets who know about the high production standards in the EU but may not have discovered the additional assurances Ireland can give around sustainability with our Origin Green programme.”

The campaign will be rolled out across the three market territories, each of which will have a specific target audience, product focus and tailored promotional activities.

Over the course of the three-year campaign, Bord Bia will target more than 500 key trade and decision makers and over 300,000 buyers will be accessible to our meat exporters at international trade shows.

Ireland exported over 6,000t of pigmeat to South Korea last year, securing access for Irish beef to South Korea. This is high on the department’s list of priorities and discussions are taking place as part of this trade mission on next steps to opening market access.

McCarthy added: “Our work here is twofold. It is about building on our existing trade contacts and creating new and long lasting business relationships.

It is also about positioning Irish companies as reliable producers of quality food and drink in Korea which, in turn, will lay strong foundations for Irish exporters once beef access is achieved.

The EU Pork and Beef trade-focused campaign will run for three years, from 2019 to 2021, and will build awareness and understanding of food safety, quality assurance and sustainability of European beef and pigmeat.