A Co. Meath dairy farmer expects his antibiotic usage for mastitis to reduce by 90% this year since implementing a new strategy for managing udder health.

Brian’s greatest herd health challenge had been mastitis and this was resulting in a high herd somatic cell count (SCC).

“We were not having much success with curing cows without using a lot of antibiotics,’’ he admits.

“We were tubing cows and using anti-inflammatory injections which cured it to a certain extent, but we know that less use of antibiotics is coming down the line and had to look at another way of dealing with it.’’ 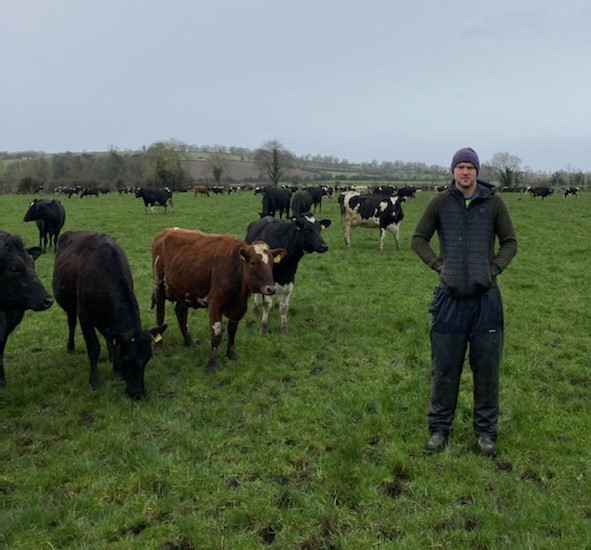 Brian Meade at his farm in Navan

He was also losing income from milk he couldn’t sell because of the antibiotic withdrawal period.

“It was a good week or so before the cows we treated had cleared up and their milk was back in the tank,’’ says Brian.

In February 2020, he was introduced to the Maycillin bolus by his local Mayo Healthcare representative Gerry Hughes.

Maycillin releases allicin, an active substance in garlic, and is designed to be used as an alternative to antibiotics in clinical and sub-clinical challenges.

Brian reports that eight out of 10 cows given the bolus responded and their SCC significantly reduced. He also gives the bolus to cows with no clinical signs of mastitis but who are flagged up with a high SCC at milk recording.

Maycillin Dry is also given to those animals at drying off. As cows are calving this spring, he has noticed a big shift from the mastitis challenges he had in previous years.

“I would expect that my antibiotic usage for mastitis and high cell count cows will drop by 90% this year by using the Maycillin bolus,’’ says Brian, who buys the bolus through Michael Connell Agri Nutrition.

Cows with persistently high cell counts are being culled from the herd. The SCC is now averaging 144,000cells/ml compared to 237,000cells/ml in spring 2020.

Brian is relieved he has found a strategy for managing udder health without antibiotics.

“We are not the finished article by any means, but Maycillin has allowed us to reduce our antibiotic usage, it is curing the problem in a better way,’’ he concludes.