John Deere has big plans for next year’s LAMMA show which takes place across the water in Peterbourgh in January.

John Deere say that a number of new tractors, sprayers and Gator utility vehicles, plus a new round baler and mower-conditioner, will be featured for the first time on the John Deere stand.

According to John Deere several of machines are making their UK farming show debut, following their European launch last summer.

In total they will feature 10 different product ranges. This will include six tractor series, John Deere claim the latest models have been designed to improve machine performance, uptime and operating costs for both arable and livestock farmers, as well as contractors.

The tractors they expect to be on display next January are the 4M, 5E, 5M, 6MC, 7R and 8R Series, including the latter’s range topping 370hp 8370R wheeled and 8370RT tracked models. All feature Stage IIIB compliant diesel-only engines.

A highlight at the show will be two of the John Deere 100hp tractors on show including the 6100MC, which they say has a more compact design than its 6M Series equivalent and is available with an optional low-profile cab for access to small buildings. John Deere noted that its durable full frame is specifically designed to accept John Deere H Series front loaders. 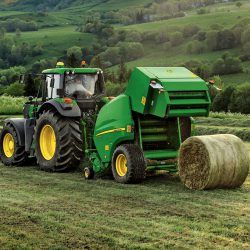 The other 100hp tractor is the 5100M tractor. Which is also available with a standard or low-profile cab and matching front loaders. In addition, the 5M Series includes open operator station and narrow versions, and offers a wide choice of transmission options.

According to John Deere the needs of smaller-scale farmers, including speciality crop producers and part-time farmers or smallholders, are also catered for by the 4M and 5E Series three- and four-cylinder tractors from 49 to 95hp, represented at LAMMA by the 4049M, equipped with an H170 front loader, and 5075E models.

In addition the John Deere stand will feature the new M732i and M962i trailed sprayers are equipped with 3200- and 6200-litre tank capacities. They claim both these models are ISOBUS ready, so the machines can communicate with the tractor and enable a range of ‘intelligent’ John Deere solutions

The company say their new F440R fixed chamber round baler is primarily aimed at customers who produce more than 3000 silage bales per season. This new model utilises a number of components from the premium 900 Series, for faster baling in heavy grass windrows without plugging.

Finally, John Deere’s new 830 centre-pivot mower conditioner has a working width of 3m, with a choice of conditioning impellers or rollers. It features a reinforced frame, large tyres, improved disc protection and a redesigned transmission for increased reliability and performance, while the newly designed floating suspension system allows the machine to closely follow ground contours.

John Deere claim these new products will be shown alongside a wide range of other John Deere tractors, sprayers, combines