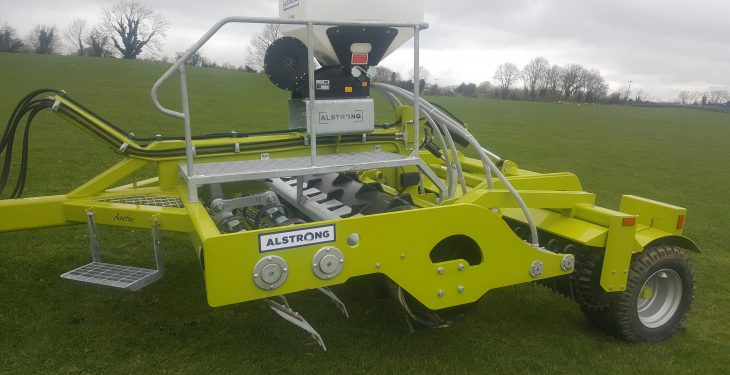 A Co. Galway-based manufacturer, Alstrong, says that its new Auctus rejuvenation and re-seeding machine is a “true all-rounder”.

According to the company’s founder, Alan Winters, the 3m-wide machine can work effectively to sow grass seed on burnt-off ground, on ground that has already been ploughed (or cultivated with a disc-type machine) or, alternatively, on an existing pasture that needs to be rejuvenated.

According to Winters, the machine has been designed here in Ireland – based on feedback from Irish farmers and contractors. 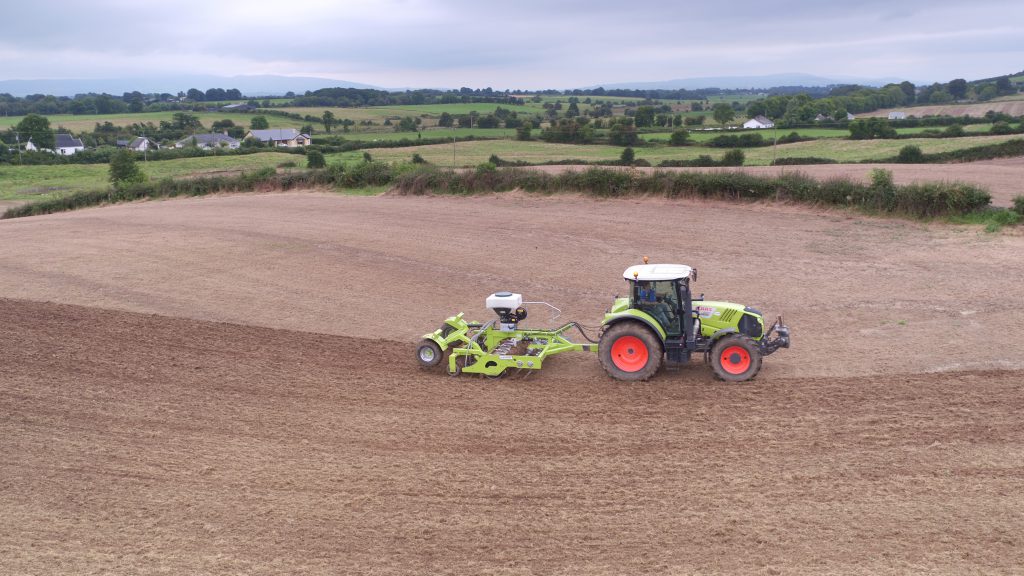 The firm, which is located close to Killimor, Ballinasloe, manufactured its first agricultural implement six years ago. That machine was an aerator; it is still in production today. It comes in three sizes – the 8ft trailed 840T, the 9ft trailed 940T and the 9ft mounted 940M. The 840T sells for €10,500 excluding VAT.

“The aerator proved popular,” said Winters, “and it got us talking to a lot of farmers and contractors. They told us that the aerator did its job, but they also needed a good machine to follow afterwards that could sow grass in all sorts of scenarios.

“That’s what led to us to build the first Auctus – about three years. That machine was a mounted unit and was quite light compared to the current model.

We trialled the prototype and found that, while it could match many of the competing machines that were out there, it wasn’t heavy enough to deal properly with all sorts of ground conditions.

“That prompted the development of the current version; it’s a heavier-duty, trailed machine which has been designed to deal with all instances where grass seed needs to go in.”

According to Winters, the prototype trailed unit was on trial last year – in the capable hands of a contractor in Nenagh, Co. Tipperary. He explained: “It performed very well. Following feedback, we’ve made some minor changes and we are now selling the finished, production-spec version. We’ve had it at several shows, including last month’s FTMTA event in Co. Kildare.

The machine comprises a number of key components. First up are the twin-row levelling boards, which can be adjusted hydraulically. When working on burnt-off ground, these act as the main ’tilling’ or cultivation tool, throwing up enough soil and clay to work with. This is where the machine’s overall weight is important.

When working on ground that has already been ploughed (or worked by a disc-type cultivator), the levelling boards do what ‘it says on the tin’; they level the loose soil ahead of the main ‘drum’.

When going straight into an existing pasture – to rejuvenate it – the levelling boards act like a ‘scarifier’, dealing with dung on the surface.

Next up is the main ‘drum’ or roller. It can be filled with water to boost overall ballast; should the need arise in very stubborn conditions. The drum has an array of 80mm hardened steel ‘aerator’ blades dotted about its circumference – 60 in total. When being used for pasture rejuvenation, these ensure that the surface of the pasture is not glazed over and ‘sealed’. According to Winters, they ensure a “porous” finish.

In other applications, the drum is designed to break up clods and consolidate the seedbed – before the seed is deposited.

Behind the drum, there is a series of “heavy-duty” 11mm tines. These, like the levelling boards up front, are hydraulically controlled. 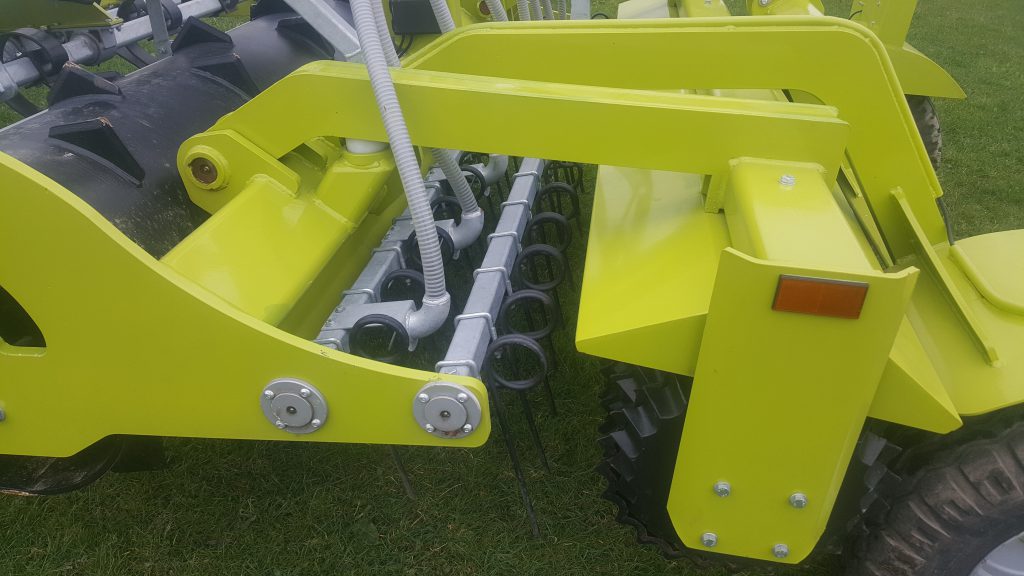 The seed broadcaster unit, which Alstrong sources from France, can be equipped with a GPS control unit. It automatically adjusts the seeding rate to match the machine’s forward speed.

Winters explained: “In tough conditions or when travelling uphill the tractor might slow down. You don’t want a situation whereby the seed-rate changes, as you travel across the field. The GPS unit helps to ensure that it stays steady, even if your forward speeds dips now and then. That means if you set the machine to sow grass seed at, say, 15kg/ac it will do that consistently all the time.”

Last but not least is the ‘prismatic’ roller, as Winters describes it. This covers the seed and ‘finishes’ the seedbed. 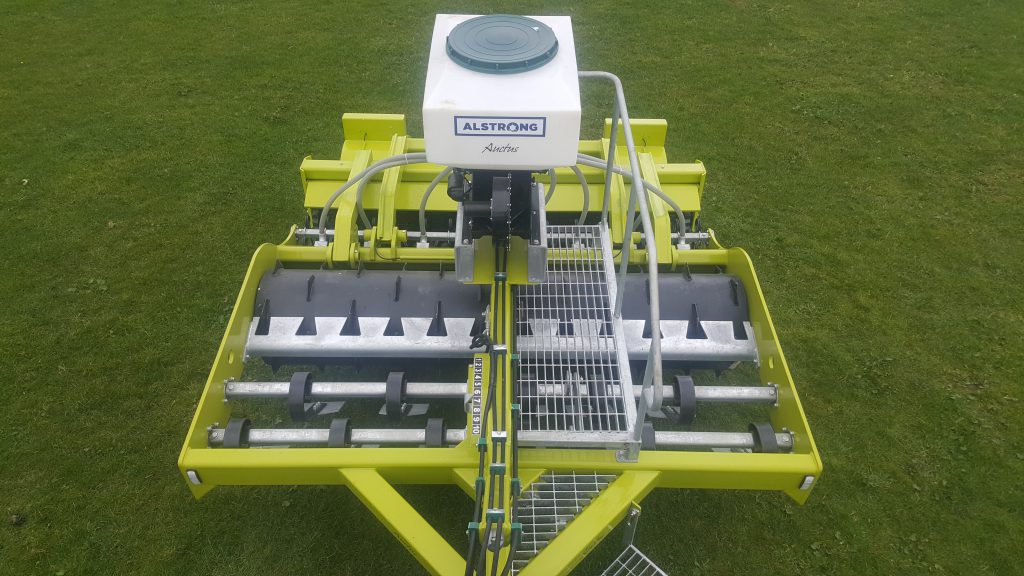 The machine weighs 4.5t (dry) or 5.2t when the main ‘drum’ is filled with water. It needs 120hp or more up front. Likely work-rate, says Winters, is anywhere from 5ac/hour upwards – depending on the circumstances.

Out on the road life is made easier by a ‘soft-ride’ transportation system, which comes into play when the machine sits up on its two rear transport wheels.

Asking price, including the pneumatic seeder and GPS control unit, is €20,200 excluding VAT.

Winters added: “It’s ideal for sowing grass seed in any scenario, though the price does mean that it’s really aimed at contractors.

I have also had a lot of interest from tillage farmers in the east, looking for a robust machine that can sow crops like rape, kale or turnips – in fact any crop that can be sown by broadcasting.

“This machine is a lot faster than a power harrow / drill combination; it’s also cheaper to run. And because it has no PTO and is genuinely a min-till machine, it qualifies for part-funding under the new TAMS scheme for tillage equipment.” 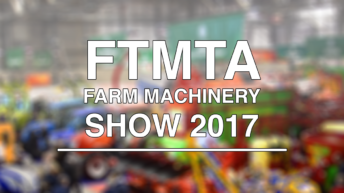