Similar to last week, farmers can expect offers of between 375-380c/kg for steers while quotes for heifers range between 385-390c/kg.

The trade for young bulls remains steady with buyers offering between 380-390c/kg for a U grade animal, while 10c/kg less is being offered for R grade animals.

Cow prices remain on a par with last week’s figures, with quotes of 330c/kg on offer for R grade cows.

Farmers with O and P grade cows can expect to be quoted between 310-315c/kg and 290-300c/kg respectively by most procurement managers across the country.

Strong supplies have been reported this week, while some procurement managers noted that the quality of cattle being presented remains high.

In the UK, strong supplies of prime cattle continue to exceed seasonally low demand levels, according to Bord Bia.

Cattle prices from the AHDB show that British R4L grade steers decreased in sterling terms and are averaging at 363.9p/kg deadweight, which is equivalent to 428.18c/kg, for the week ending January 21.

Meanwhile, heifer prices for the R3 grade were making the equivalent of 415c/kg and 403c/kg for Britain and Northern Ireland respectively, in a week when the euro was averaging 85.7p.

In France, the market remains unchanged on previous weeks with slow demand reported. Trade was steady for offal products with poor demand for entrecotes and steaks.

In Italy, some improvements have been noted in the market with increased trade for forequarters, while some stabilisation has been reported in the trade in Germany.

Looking at global markets, beef exports from Paraguay in 2016 are estimated to have increased over 11% on 2015 levels with Russia and Chile the main export markets.

In Argentina beef exports increased by almost 18% year-on-year in 2016 with China, Chile and Germany the principal outlets, according to Bord Bia.

‘Marts the number one venue for cattle sales in Ireland’ 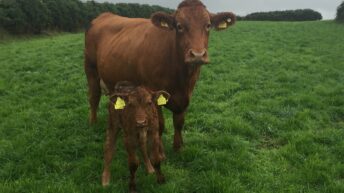