Aurivo has announced that its milk price for December supplies remains unchanged at 36.5c/L including VAT.

This is the second month Aurivo has held its milk price; this continues a trend, with other processors also announcing unchanged prices for December milk.

Yesterday, Arrabawn and Dairygold both announced decisions to hold milk prices; Arrabawn will pay its suppliers 37c/L including VAT for the month of December.

Meanwhile, it was confirmed that the Dairygold board decided to hold the price the co-operative will pay for milk supplied in December at 36c/L including a 0.5c/L quality bonus and VAT.

Last week, suppliers of Lakeland Dairies learned that they will receive a base price of 36.5c/L including VAT and including a 1c/L butter bonus for December supplies. 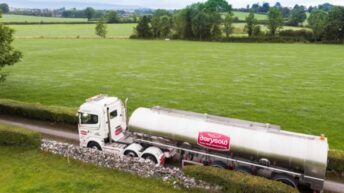