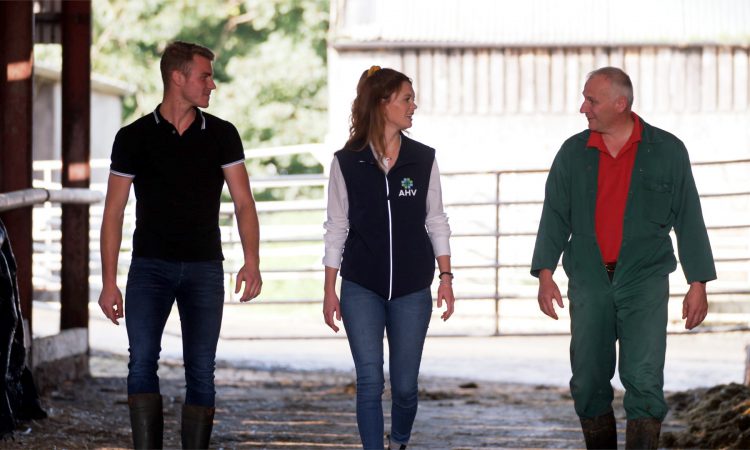 The consistent use of the AHV product range over the past nine months has seen Donegal-based Drumcairn Holsteins reduce its overall reliance on antibiotics by 90%. Bulk cell count levels have also fallen dramatically in the same period.

Alexander Tinney takes up the story: “The farm is located close to Letterkenny. I work on the farm with my father Richard and have finished my studies at Greenmount this year.

“The herd currently comprises 180 pedigree cows with calving split between autumn and spring groups. We plan to push numbers up to 200 in the not-too-distant future. Recent investments in a new milking parlour and cubicle house have allowed us to grow the business.”

‘We were aware of antimicrobial resistance’

Alexander is quick to point out that the issue of antimicrobial resistance is one that has been of concern to the family for the past two to three years.

He commented: “I was made fully aware of it while studying at Greenmount over the last few years. The same also holds for my sister, who is currently completing an honours degree in Letterkenny Institute of Technology (LyIT).

“In light of this, we introduced a policy of only tubing cows with a cell count of over 200 thousand at drying off. The others got a teat seal only.”

But that strategy was fundamentally reviewed following a visit made by Alexander and Richard to the 2019 Royal Ulster Winter Fair. While there, they visited the AHV stand and found out about the company’s strategy to deal effectively with udder health without a reliance on antibiotics.

“I was also impressed with the AHV approach to boosting animal health, across the board, again without a reliance on antibiotics,” Alexander explained.

The beginning of 2020 saw Richard and Alexander commit to using the AHV product range.

“We concentrated initially on the use of the Extra and Quick tablets to tackle the herd’s issues. We also used the Aspi drench,” said Alexander.

“And the approach has worked. There is a degree of trust required in using the tablets for the first time. In terms of udder health, the tablets act to totally clear out the affected quarters.

“Because the tablets do not contain antibiotics, there is no milk withdrawal period to be concerned about. We have also valued the tremendous support and advisory service made available by the AHV team. They guided us through the process of using the tablets and getting best value from them.”

Based on milk recording results, the Tinney’s can easily identify problem cows and administer AHV products where necessary.

‘The results speak for themselves’

“We have managed to dramatically reduce bulk cell count levels. Prior to using the AHV products, we had a real problem in this regard. Antibiotic usage has also fallen by 90% since the beginning of the year. We would like to get our antibiotic usage figure down to zero in the not-too-distant future.”

Encouraged by the results achieved with the Extra and Quick tablets, Richard and Alexander are now using a number of other AHV products.

These include the company’s Booster powder. Mixed with warm water, this is pumped into cows that are off their feet or are not on their feed directly after calving. The product provides animals with an immediate energy boost while also stimulating the metabolism.

“We are now in the middle of the autumn-calving season,” said Alexander.

“Currently, all the newborn calves are receiving AHV’s Calf Start powder. The product acts to prevent scouring in a totally natural manner.

“We are extremely impressed with the impact made by the AHV product range. I would heartily encourage their use on any dairy or livestock farm,” he concluded.

AHV (Animal Health Vision) International, originally founded in Holland, now holds offices in both the UK and Ireland and in several other countries and has recently opened a new premises in Portlaoise, Ireland.