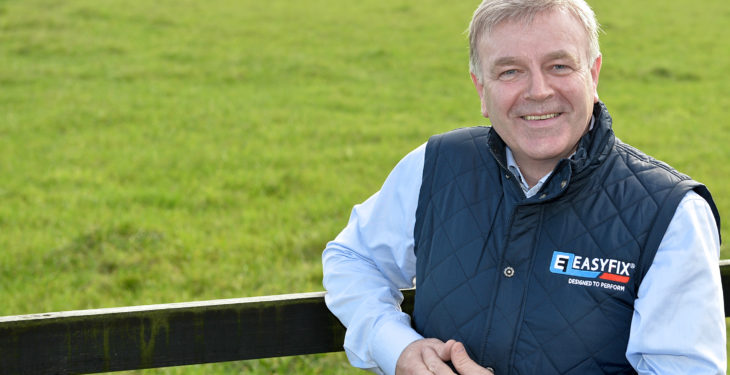 Working on the small family farm in east Galway, Michael Earls was prompted to examine the whole area of animal welfare.

“My late father, Johnny, milked 30 cows and had another 30 beef cattle on the farm, near Athenry, which my brother Paul took over,” said Earls.

Having done various jobs on the farm and seeing what his brother, John, was doing in his engineering business – which specialises in manufacturing farm buildings – prompted him to think of solutions to animal welfare issues. This ultimately led to the formation of his award-winning business, EASYFIX.

Earls started out working in sales at a time when his brother was erecting a lot of slatted houses. “They were seen as a fantastic way of accommodating animals in terms of labour costs, but a quite obvious negative was that animals were not meant to be housed on concrete.

“A lot of people had been exploring possible solutions, and the notion of putting rubber onto slats was raised. However, it was a tricky thing to do. Because of the openings in the concrete slats, you had to have a corresponding opening in the rubber flooring,” he said.

“How I differed from other people in the solution I designed, was that I developed a rubber wedge anchoring system. When I registered a patent for the design in 2001, I didn’t fully realise that I had stumbled on a unique and innovative way of keeping the rubber in place.” 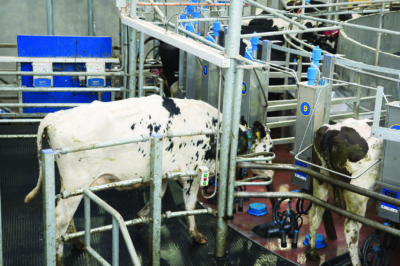 “The EASYFIX slat rubber remains our best-selling product around the globe for dairy, beef and veal enterprises in over 30 countries,” Earls said.

The period from 1996 to 2001 was, Earls said, a crucial time during which he kept down his full-time sales job while trying to develop innovations centred around animal welfare.

He established the business in 1996, financially assisted by his national school teacher wife, Maureen. “I started off with an office at Athenry livestock mart, doing business with a company in Poland that looked after the manufacturing process.

“I soon found that farmers who had been purchasing the slat rubber in small quantities were coming back for more. I had developed a product with a short payback because additional weight was being gained from animals coming off rubber slats, and the welfare element also resulted in less lameness,” Earls said.

“Slat rubber is still our flagship product. Close to two million animals are housed on our rubber flooring worldwide,” he said.

What we are aiming for is to replicate, as closely as possible, natural outdoor conditions indoor.

Between 2001 and 2005, the business grew rapidly. The money that came in allowed Earls to expand into other industries. “Originally my primary focus was on beef, but then I started to look at the dairy, pig and veal sectors as well as the equine industry.”

In the equine industry, the company designed hurdles and fences for racehorses which were brought to market in 2006. They are sold in countries such as: Ireland; the UK; Sweden; Czech Republic; France; Germany; and Australia.

“Traditional jumps are made from wood, so we substituted natural products such as birch, for synthetic products for longevity, and that has proven to be very successful,” said Earls.

Animal welfare concerns kicked in again when protests at the number of fatalities on the Aintree course caused the Grand National organisers to seek a solution from EASYFIX in 2012.

The team rose to the challenge by devising jumps with synthetic flexible cores. “Since 2013, there hasn’t been any fatalities in the Grand National,” Earls said. The jumps continue to sell worldwide.

Back to farming, and Earls supplies huge amounts of rubber into the veal industry in Europe. He travels extensively, and just completed work on a barn for 25,000 calves in Russia, one of the company’s biggest projects to date.

Flexible cubicles for the dairy sector were developed 10 years ago and have really taken off, according to Earls. “We hope to sell 50,000 cubicles on the world market in 2017,” he said.

‘Enrichment’ is an element of animal welfare that has been explored by the research and development team at EASYFIX. This has led to the development of a pig toy device.

“You throw it in among pigs and they love playing with it. It doesn’t pick up dirt the way an ordinary ball does, and it practically eliminates tail and ear biting which are big problems with pigs,” he said.

“Farmers have become more aware of the need for animal welfare considerations, and a lot of activity is driven by regulation from Europe. It is compulsory to have an enrichment device in pigs’ pens, although that doesn’t always happen in practice.

“In parts of Germany, it is compulsory to put rubber flooring in all new barns. Rubber is subsidised by governments in other parts of the world. In 2007, the Irish government subsidised the use of rubber and there was a huge uptake. Everybody is looking to improve animal welfare as the payback is encouraging and this is driving sales.

In dairying, there is a greater yield from cows that are in comfortable environments. If your animals are comfortable, they will pay you back with greater productivity.

A cow scratcher is another product developed with animal welfare in mind. As we all know, cows love to scratch, and all the EASYFIX cubicles are equipped with cow scratchers. “They were developed separately but are now part of the cubicles.

“We are constantly developing new products for all sectors and listen to feedback from customers. Over half our employees are from farming backgrounds, and we also have engineers on staff. I am always visiting farms, ranging from ones with 20 animals to 20,000 animals. One of the things we changed as a result of listening to feedback, was the development of different types of rubber for the slats. We realised that one size didn’t fit all,” Earls said.

The business relocated to a purpose-built premises in Ballinasloe in 2007 and Earls’ two sons, Niall and Gary are employed in the business. Niall works in business development while Gary is in logistics.

Growth of 20% has been experienced this year and 2018 looks set to be a busy one, with plans to expand manufacturing and other areas of the business.

“We are looking for planning permission for another unit. We manufacture some products on-site, with others made in other countries such as Croatia. A lot of assembly and customised work is done in-house.”

As Irish farms get bigger and more farmers house their stock all year around, awareness of the importance of animal welfare is vital, according to Earls. “Lameness is a huge problem in the dairy and beef sectors. It is critical to have an environment that improves animal comfort and welfare for better indoor living.” 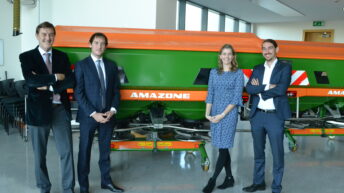