Today, the pound has fallen to its lowest level in 30 years after the UK defied market expectations to vote to leave the European Union.

The pound had been on the slide against the majority of the 16 most actively traded currencies globally since the start of 2016. 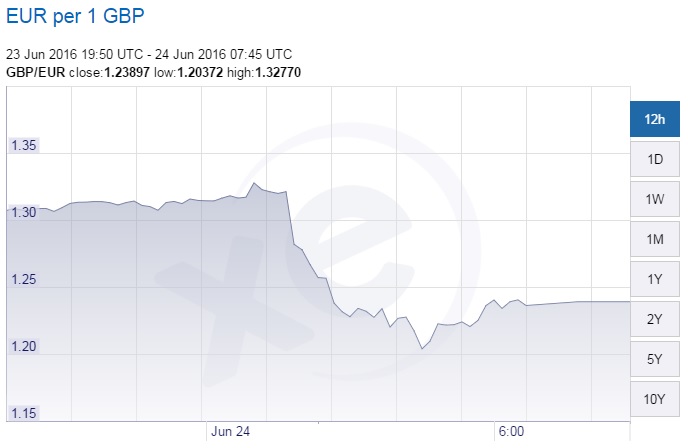 The relationship between euro and Sterling is vital for Irish agri-food exports with the UK by far Ireland’s most important market for beef, dairy and lamb.

The UK is without a doubt, the most important market for Irish beef. Any fluctuations in the euro/Sterling exchange rate has a major impact on the farm gate beef prices that Irish farmers receive.

Irish meat processors have significant exposure to downward movements in the value of the pound. 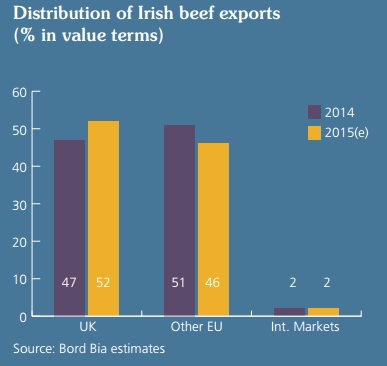 Volumes of Irish beef destined for the UK was largely unchanged in 2015 at an estimated 272,000 tonnes. This equates to just over 54% of total Irish beef exports. Reduced buying power from the UK, or trade barriers between the UK and Ireland would have significant and negative implications on beef farmers in Ireland.

The UK is also a vital export market for Irish dairy products accounting for almost one-third of the total.

Even with favourable currency rates in 2015 a decline of 4% was recorded in the value of exports in 2015 at an estimated €960m.

Already, exports to Britain of key Irish dairy products have seen a significant fall in the first two months of the year, according to latest data from the AHDB in the UK.

Meanwhile, the UK’s cumulative butter imports also decreased by 1,536t to 6,486t down 19% compared to volumes imported over the same months last year. Imports originating from Ireland were down 612t or 14%.

The falling value of the UK market for Irish dairy products is particularly worrying in the context of increased milk production here in Ireland and depressed markets in Europe and across the world.

Another sector in which the euro/Sterling exchange rate plays a key role is the trade in lambs between Northern Ireland and the Republic.

As many as 200,000 lambs can be imported into the Republic from Northern Ireland between May and November each year.

The importance of currency movements on this trade was highlighted in 2014 when a drop in the value of euro against sterling made it less advantageous to export lambs from the North to the South for direct slaughter.

This resulted in a larger proportion of lambs being killed domestically in Nothern Ireland.

In the corresponding period in 2013, 196,094 lambs/hoggets were exported to Republic for direct slaughter, accounting for 43% of total NI production.

While the majority of the UK’s beef, dairy and sheepmeat production is consumed domestically when the value of the pound falls, UK produce becomes more attractive to EU markets.

For Irish farmers, this means our products may have to compete with increased levels of UK beef, dairy and lamb on the EU market.

Unfortunately, such a development could coincide with falling consumption of key food products across Europe as well as a stagnant EU economy.

One upside to the weakening euro is that machinery in the UK becomes cheaper for Irish buyers.

In recent years, the weakness of the euro has seen a huge fall in the number of tractors and machinery being imported from the Northern Ireland and the UK.

With the pound now at 81p against the euro many Irish machinery dealers may be weighing up the trade across the water.