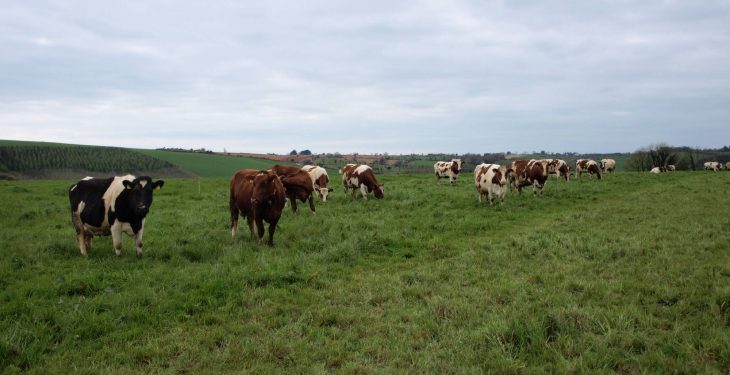 Three dairy farmers, all of whom use Lely Robotic Milking Systems, will open their gates later this week to share their experiences of robotic milking.

The farmers in question are located in the counties of Cork, Mayo and Waterford and each runs a unique system.

“I began farming here with my aunt Eithne in 1994 and she started the MRI project over 25 years ago.

“Originally we had British Friesians and Eithne was seeking a better beef animal as we were rearing all the animals at the time.

“After some research she discovered the MRIs. Two heifers were imported from the Netherlands and more cows were purchased locally and the herd was built up from there.

“I have since decided to focus more on their milk production qualities and we have 62 cows calved this spring that are currently averaging 26L at 3.4% protein and 2.8% butterfat,” he said.

Out with the old and in with the new

Stephen added that prior to switching to a Lely robot, he was milking in an eight-unit herringbone parlour, which “needed to be updated”.

“It was fine at the time but with increasing cow numbers and the quota era coming to an end, I had to consider my options.

“I had already invested in an automatic calf feeder.

“I felt the principal of calves coming and going to the feeder and being fed automatically would be no different for cows from a milking perspective.

Labour was another key reason for considering robotic milking. With a young family, I wanted a more flexible way of working.

“My wife is happier now that she is seeing more of me and I am not tied to morning and evening milking.

“The cows took to the system really well and were all milking by themselves within a week.” he said.

After a busy calving period, Stephen is really beginning to see the benefits of the robotic milking and an ABC grazing system on his farm.

“They are milking on average 2.5 times daily and come and go to the Lely Astronaut milking robot at their leisure.

He added: “The Lely T4C (‘time for cows’) is excellent – from an information point of view.

“You can clearly see the cows that are not performing well and make individual cow-based decisions. This allowed me to have a more targeted approach to drying off last autumn.

“Instead of having a blanket dry period based on the calendar, low-yielders were dried off earlier without really affecting milk production in the tank. 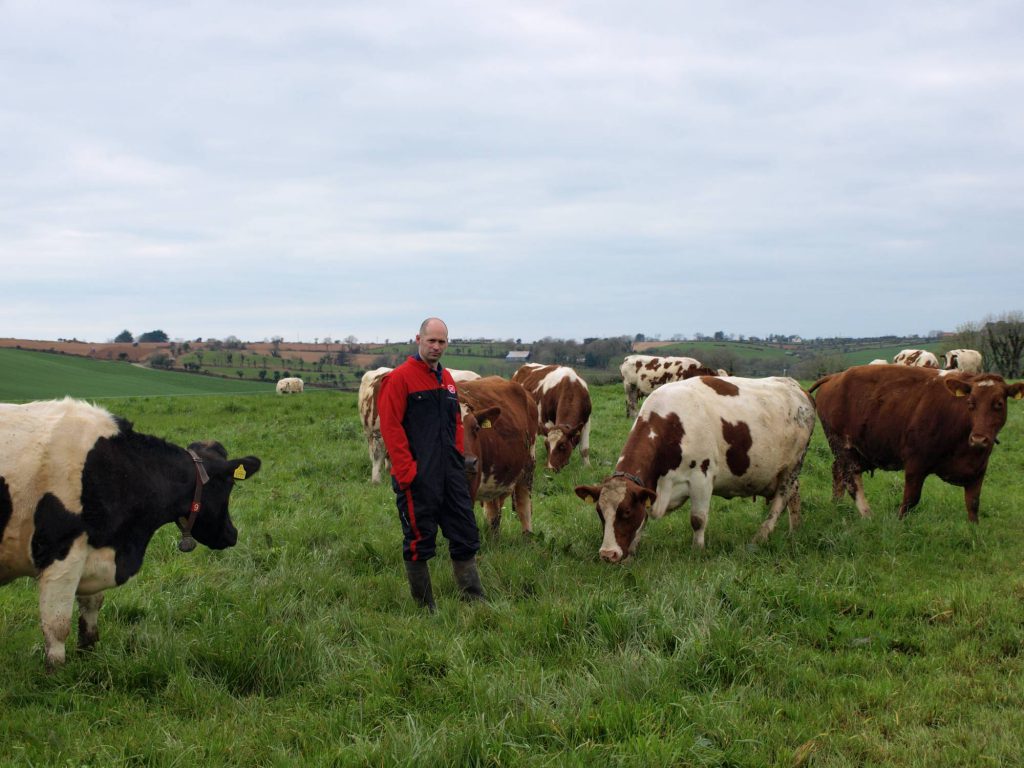 “This also helps reduce feed costs and manage cell count issues, which are usually higher at the end of lactation.

Having a cell count reading for every cow at every milking is excellent. It will help me continually improve the quality and efficiency of the herd.

Stephen Harte will host an open day on his farm on Tuesday, April 18 from 11am to 3pm. The farm will be signposted from the ‘halfway roundabout’. Click here for more information

A robotic milking system in the west

The Dolans installed their first Lely robot in April 2016 and milked 70 cows successfully through the year.

This spring, with increasing cow numbers, they opted for their second Lely robot and will be milking over 90 cows by the end of the month.

Prior to making the switch to robotic milking, Louis said he had been milking in an eight-unit parlour for 41 years.

We were spending over five hours per day milking whereas now, we are still as busy as ever but not milking cows anymore.

“I like the change of lifestyle and, granted, we are spending as much time on the farm doing other jobs; we still have more time to get work done as things were often put on the long finger in the past.

“The great thing is the flexibility in the evenings, as we are not tied to milking cows anymore so we can come and go as we please,” said Louis. 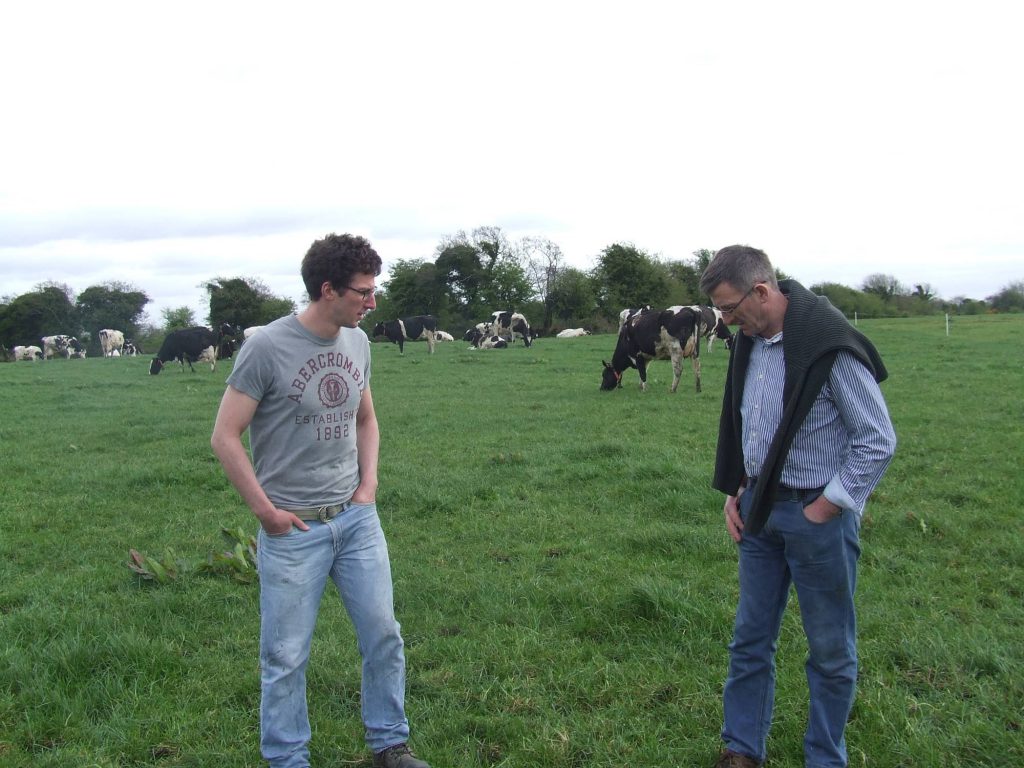 David also touched on the changes the pair have seen in their working day since the robotic milking system was installed.

“The working day consists of 20 minutes early in the morning carrying out the routine daily robot tasks (cleaning the laser, changing the milk filter sock and checking the ‘attention’ cow list).

“This gives us plenty of time to do the other daily jobs of moving fences, fertilising paddocks and grass budgeting,” he said.

David admitted that the first year using the robot was demanding starting out, as it took about a week for the cows to adjust to the robot and a while longer to get the hang of grazing.

“We struggled a bit with cow movement early on but one year on, and with a few issues ironed out, cows are moving well now.

“They fully understand the system and we are very comfortable growing and allocating grass. We are operating an AB grazing system which ensures the cows are offered fresh grass every 12 hours.

“They are averaging 33L/day on 5kg of concentrates, with 2.3 milkings per cow at the moment and cows are very happy,” he said.

Since making the switch to the robotic milking system, David said the cows are less stressed and are easier to handle nowadays.

“They have lost the herd mentality and are more docile and placid about the place and they come and go as they please.

“Cow condition has certainly improved due to the ‘feed to yield option’ – ration feeding ranges from 2kg up to 9kg, depending on yield, and cows producing more milk are fed more ration accordingly.

“On this system we have saved about 20t of meal which equated to €7,000 last year,” David explained.

David added that mastitis and Somatic Cell Count had always been an issue on the farm and, while it is not fully cured, the Lely Astronaut has certainly identified cows that need treatment much earlier.

This has resulted in less antibiotic treatments of cows and less milk being discarded – resulting in more milk hitting the tank.

David continued: “The 24/7 service from Lely Center Mullingar is excellent; 90% of our issues are sorted remotely via telephone or laptop without the need for a call-out.”

Louis and David Dolan will host an open day on their farm on Wednesday, April 19 from 11am to 3pm.

The farm will be signposted from the N17 at Ballindine (the main Tuam-Claremorris road). For more information on the Dolan’s setup click here

Robots: A key influencer in Carrick-on-Suir

He installed two Lely Astronaut milking robots over three years ago while still in his mid 20s.

His late father David was one of the key influencers in making robots increasingly popular in the local area.

And thanks to his initial groundwork, it has since become a huge success on their farm and neighbouring farms. 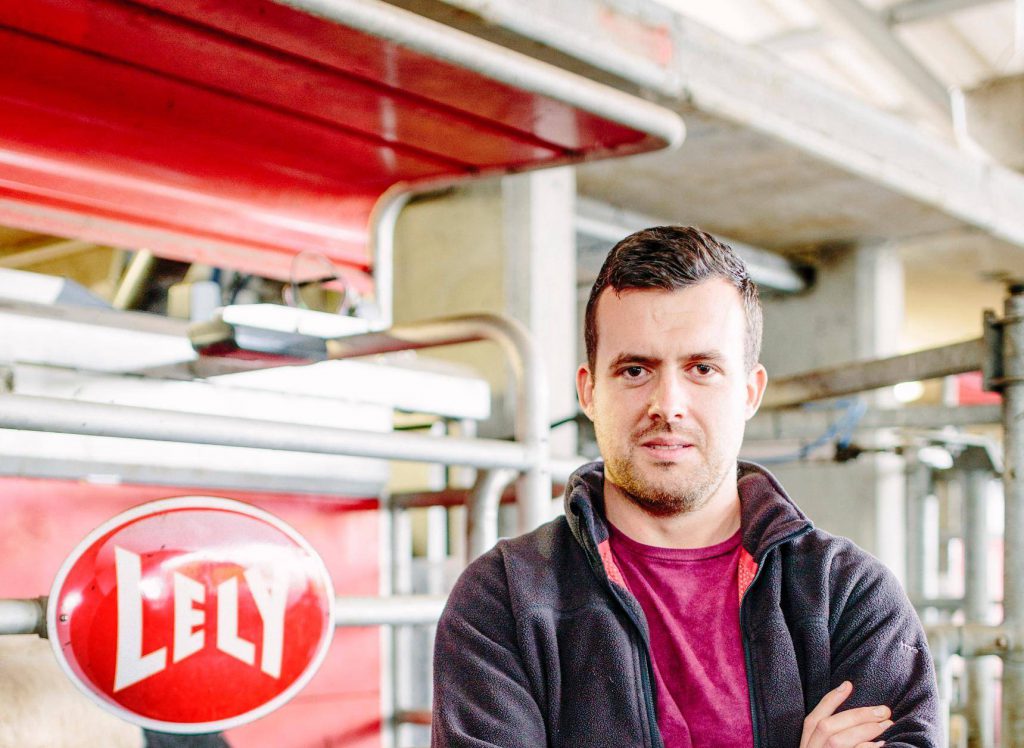 Milk production with the Lely Astronaut

The Drohans milk 145 Holstein and Montbeilarde cows in a spring-calving system that are currently producing 27kg of milk at 3.45% protein, 4% butterfat and an SCC of 80,000.

“Lifestyle was one of our key reasons for choosing robotic milking.

“We are no longer tied to morning and evening milking and the flexibility of the system allows me more time to tidy up on other jobs that would have been neglected in the past.

“The workload was also becoming more demanding as we increased cow numbers.

“We felt that the information from the robot would give us a clear understanding of where we were production-wise and ensure we made better cow-based decisions,” Mark said.

We chose Lely as it was the only company in the area fully committed to robotic milking and they have given us great support since installation.

For David, one of the best features of the Lely Astronaut is the Somatic Cell Count (SCC) reader.

“I wouldn’t be without it. Along with the mastitis indication per quarter I am in total control; there is no guess work!

“I have advanced warning of any potential out-breaks developing. The ‘Pura-steam’ cleaning of each cup gives me great confidence in the prevention of any cross contamination between milkings,” he said.

The Drohans operate an AB system of grazing on the milking platform.

“I find that the number one reason cows travel to the robot is the urge to be milked. Access to fresh grass would be second and the third would be the meal in the robot trough.

Mature cows will always know when they need to be milked and will travel – no matter how much grass is left in the paddock.

“I don’t need to make dramatic changes during late lactation to keep cows moving. I just add silage to the buffer feed fence.

“My cows are averaging 2.4 milkings per day. I am happy with their production figures. However, I expect it to increase over the coming weeks.”

Back up and support

“This system would not work without support from the center.

“The difference between robotic milking and traditional methods of farming is that you are buying into the company, the idea and also a different way of farming.” concluded Mark.

The Drohans will host an open day on their farm on Thursday, April 20 from 11am to 3pm. The farm will be signposted from Carrick-on-Suir. For more information on the Drohan’s system click here