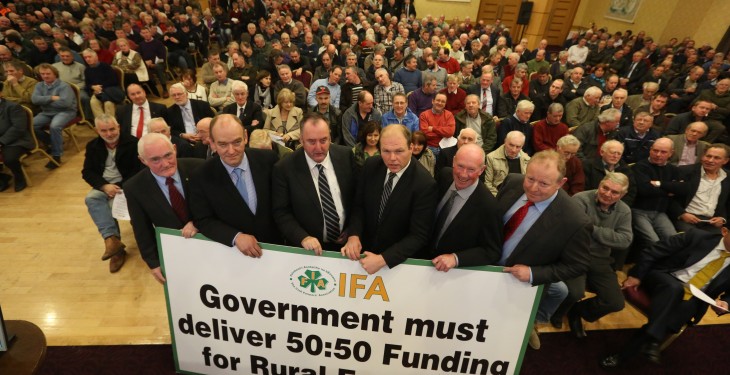 More than 2,000 farmers across Ireland attended last night’s rural development IFA-organised rally to call on the Government to re-affirm its commitment to rural Ireland by delivering a well-funded Common Agricultural Policy (CAP) Rural Development Programme over the next seven years.

“Rural Ireland has suffered greatly in the economic downturn and the Government must put farming and the rural economy at the centre of its recovery strategy of increasing jobs and economic activity in all parts of the country,” said its president John Byran speaking from the podium in Mullingar’s Park Hotel.

“The Government must provide 50:50 co-funding, with national top ups, to provide a combined EU/national annual budget of €660m under CAP Pillar II measures. The IFA campaign has prioritised strong farm schemes to support vulnerable sectors and regions, and low-income farmers.”

The IFA President said investment under the Rural Development Programme underpins production across all regions of the country, through schemes such as Disadvantaged Areas, Agri-Environment (REPS/AEOS), Suckler Cow and Sheep payments and farm investment aid for on-farm modernisation and efficiency.

Experts from University College Dublin (UCD) and Teagasc will also be speaking at the rally on the impact of direct payments on farm income, agricultural production and employment in the rural economy.

“Even in the good times in Ireland we were not providing 50:50 co-funding for rural development in terms of the average spend on such development over the past seven years,” he added.

It is understood the Government will decide on CAP Pillar II funding and plans by mid-December.