A number of dairy farmers, milking more than 100 cows, will open the gates of their farms as part of a series of upcoming Lely robotic milking open days.

The first open day will take place on John and Louise Gleeson’s farm in Drangan, Co. Tipperary. This spring, the Gleeson family installed three Lely Astronauts on their farm.

Currently, they are milking 160 British Friesian cross cows. These cows are averaging 21kg of milk at 3.34% protein and 4% butterfat. 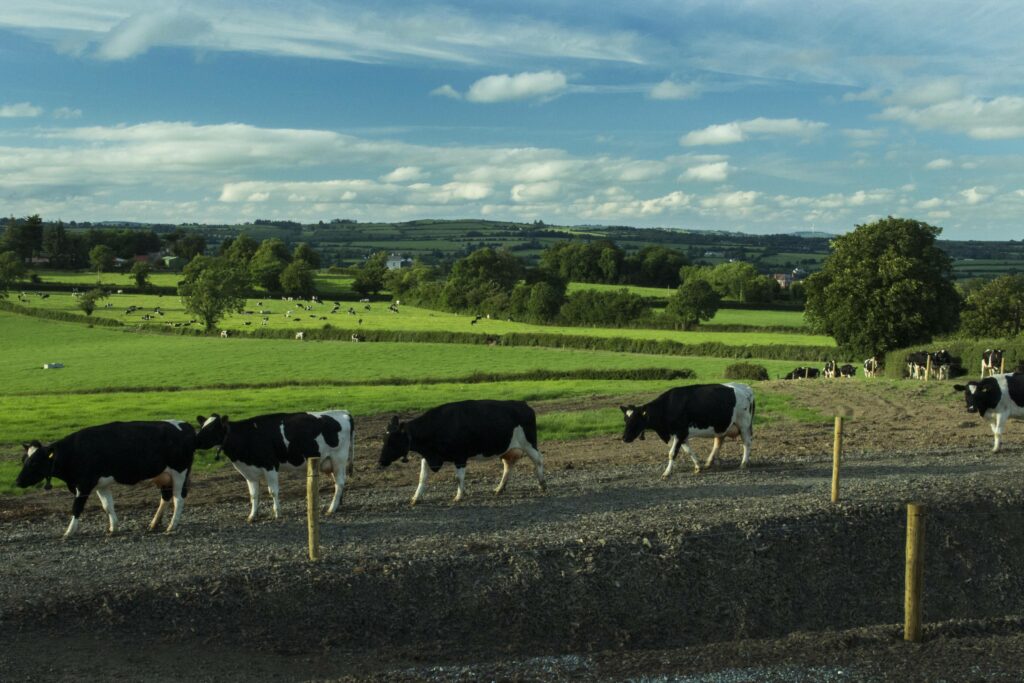 When asked why he chose the Lely Astronaut Milking System, John said the unique robotic arm used to connect the cups during the milking process was one of the most influential factors in his decision.

“The cows can kick it until the cows come home and nothing will break.

“I was not convinced by the robotic arm on some other makes; but the Lely arm is more robust than anything else I saw.

“I would give up milking if I was forced to go back to a conventional milking parlour. To know you have made the right decision and then see things continuously improving week-by-week, getting better and better, feels great.

This is the way to go; I’m so glad I didn’t invest in an ordinary parlour. If I had my big 30 unit, I’d be rightly stuck. Basically, I’d give up milking cows before I’d go back to the conventional way.

“I think I will also benefit healthwise and I can look forward to life after cows. I was always under pressure with the old system and constantly running against the clock,” John explained.

One of the biggest benefits

John said that one of the biggest benefits he has seen since installing the Lely Robotic System is the time the system affords him.

“I can pick out cows individually and I can single handily manage large numbers now. I have a complete picture of my herd – both good and bad.

“The robot will highlight under-performing cows and, as a result, let me know what to improve on to maximise the potential of the herd,” John said. 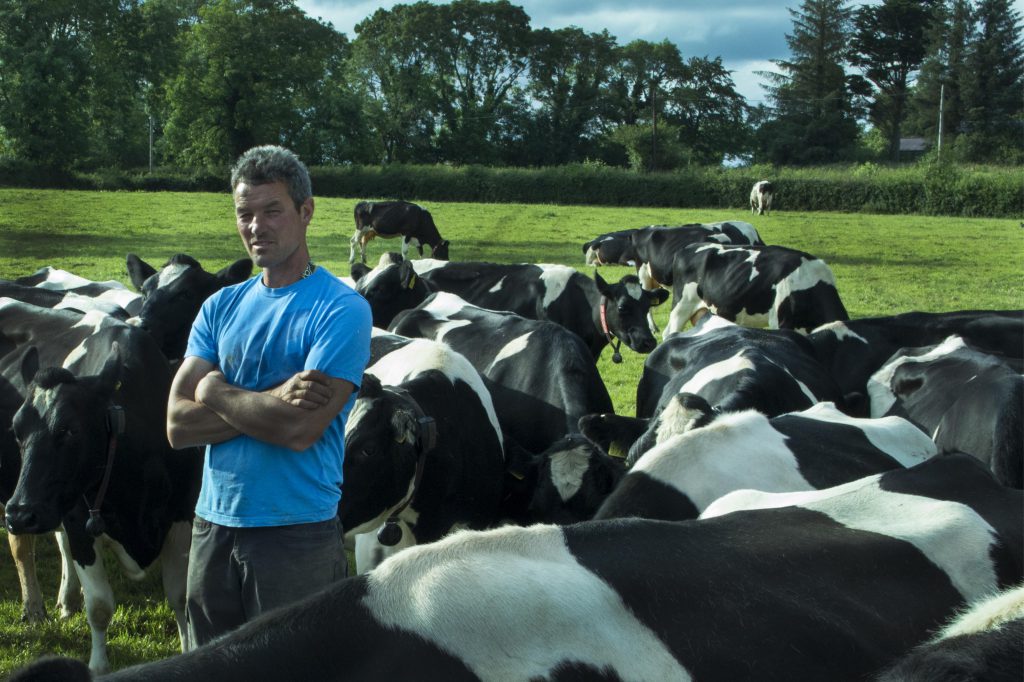 John added: “We were always strip grazing and not much has changed really.

“I was surprised to see how content the cows were when grazing; they are much happier than in the past. Personally, I am spending half an hour, twice a day, changing wires and looking after any problem cows.

“We are currently using an AB grazing system and will move to ABC next spring once we build an underpass to provide access to an extra block of land.

The aim next year is to maximise the potential of the system with 200 cows. I am saving several hours a day by not physically milking cows anymore.

“After my experience, I definitely would recommend the Lely Astronaut robotic milking system to farmers with high cow numbers.

“The price gap is narrow between the systems. If you can afford it, change. If not, hang on and put in an Astronaut. You may as well be paying for a Lely rather than the milking machine,” John said.

“I didn’t think I would be having an open day so soon after starting up. I couldn’t have managed to do so without the support I got from Lely and also having a good man on the ground, who adapted to the system very quickly.

There is more work involved at the start-up phase; not physical work but more mental, so I was very dependent on support at the beginning. The Lely lads could not have done any more to help.

“This advice helps ensure a smooth start-up period and provides the customer with confidence during this exciting new transition,” John concluded.

John and Louise Gleeson will host an open day on their farm at Mount William, Drangan, Thurles, Co. Tipperary, on Tuesday, July 18. The open day will run from 11:00am to 4:00pm.

The farm will be signposted from all major routes close to Drangan village. Click here for more information

In the near future, Enda plans on ramping up milk solids production from 450kg/cow to 500kg/cow.

Prior to entering dairying on the home farm, the Horgans were running a beef and tillage enterprise.

“Dad was milking cows with his two brothers in Nobber for the last 40 years. With the abolition of quotas, we decided to turn the home farm into dairy and started with 80 heifers in 2015.

“We are increasing cow numbers for next spring and are currently building a shed with slatted tanks and 150 cubicles to house the extra cows,” Enda said. 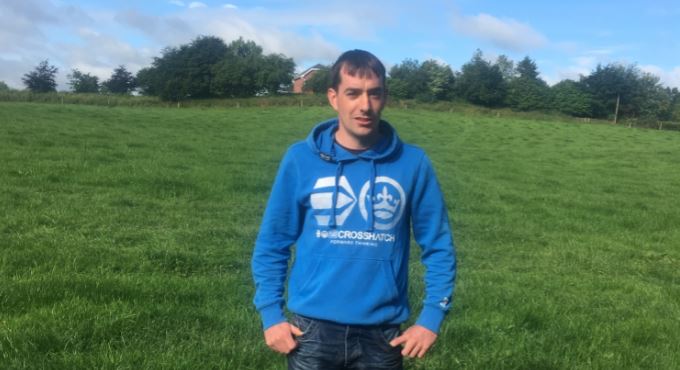 The Horgans had looked at milking parlours originally. But, after visiting farms in Northern Ireland, they decided to give a Lely Robotic System serious consideration.

“We were very impressed and decided to study them even more. Dad had milked cows for 40 years and had enough of that and I was a new entrant to dairying.

We decided to put in two Lely Astronauts and started milking in the spring of 2015. We haven’t looked back since.

“It’s a real change of lifestyle; as well as having more spare time, we have far more flexibility – both of us can take evenings off or head away at the weekends. We are not tied to the cows anymore.

“We put an hours work into the robots daily. 30 minutes is spent in the early morning carrying out routine daily tasks and another 30 minutes organising the paddocks for the day.

“Unless there is a cow for AI, that’s it for the day. Once organised, there’s no big hassle getting away to do other things,” Enda said.

Another added benefit Enda has found from the robotic system is the information provided at milking time.

“The information generated is very impressive,” he said.

Parameters measured by the system include: heat detection and rumination; SCC; weight; and daily milk protein and fat indicators. The robots also incorporate a feed-to-yield and automatic drafting system.

The knowledge and information is powerful and gives us control to react where necessary. It’s the best way to milk a cow.

“Every milking is exactly the same and, with the current labour shortage, it’s the way forward,” Enda stated.

Enda admitted that he was unsure how grazing would work with the robotic milking system. But, after a while, the cows got the hang of it.

“It took us a while to figure out grass allocations and daily covers; but we are flying now.

“We are operating an ABC grazing system, which ensures that cows are offered fresh grass every eight hours.

Cows are grazing 1,300-1,500kg/ha covers and are currently averaging 21kg/day on 0.8kg/day of concentrate at two milkings per cow at the moment.

“Our solids are very good at 3.7% protein and 4.3% fat and there is virtually no mastitis. I can’t remember the last time I tubed a cow,” Enda concluded.

Enda Horgan will host an open day on his farm at Fringerstown, Castletown, Navan, Co. Meath, on Wednesday, July 19. The open day will run from 11:00am to 4:00pm.

The farm will be signposted from the N52; the main Ardee to Kells road. Click here for more information

Cows are flying in west Cork

Brendan Collins farms with his father Pat in Kilmalooda near Dunmanway, Co. Cork. As well as dairy farming, they run a contracting business and Brendan also operates a concrete formwork business.

“We had an old eight-unit parlour and I had been thinking about robotic milking for a number of years since I first saw the Lely Astronaut at the ploughing,” Brendan said.

“I was always looking for negative information on the system, but could never find any.

“In the spring of 2016, I started planning a new shed and with the ever-increasing shortage of labour I said it was time to take a serious look at robotic milking. We did the sums and decided the time was right to invest.

“We started milking with two Lely Astronaut Robots on March 21 and, less than four months on, the cows are flying.” 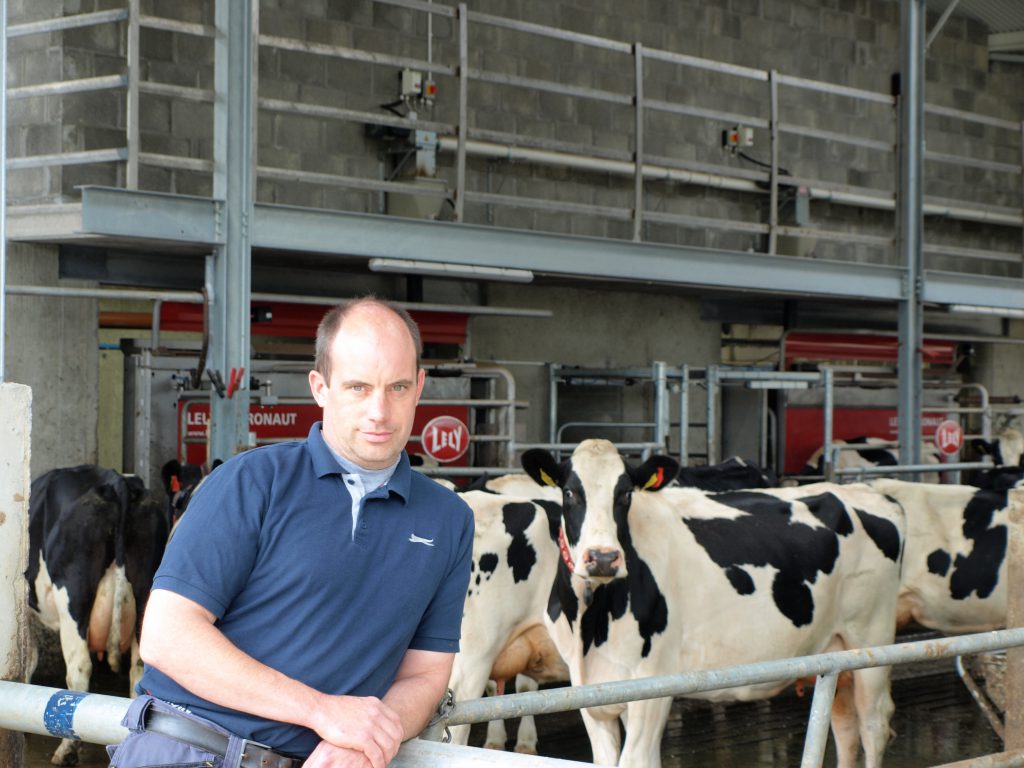 No longer in a rush home to milk cows

Brendan added: “I now have far more flexibility when working off farm.

“When I’m on a concrete pour, you would usually have two or three hours in front of you and the potential for ready mix to run late is always there.

“Until this year, I would have always said that cows and concrete don’t mix. Nowadays, I don’t have to be in a rush home for evening milking as the new system allows me to be far more flexible in relation to my workload.

The cows are content and they come and go to the Lely Astronaut at their leisure. We are saving over four hours labour daily; so I’m under far less pressure and can have a sleep in on a Sunday if I need to.

“Although my dad was a bit sceptical at first, he is now convinced and is looking for more work. He has plenty of time to concentrate on the contracting business without being tied to the clock,” Brendan added.

Project co-ordination, start up and grazing

Brendan added that the Lely Centre in Mitchelstown had to work around him to install the system, as he was finishing off the building work.

“The installation process ran very smoothly and, before I knew it, we were ready to milk cows.

“We started with 92 cows and the first two days in particular were tough going. But, by the third day things were already becoming easier with about 75% of cows milking by themselves.

By the end of the first week it was amazing to see how well the cows had adapted.

“People need to understand that it can be tough going for the first couple of weeks as it is all new for the farmer and the cows as you need to break the herd mentality.

“But they quickly begin to understand that they can come and go to the robot at their leisure and be milked at any time of the day or night.”

Brendan said that he was fairly well organised from a grazing perspective, as he already had a paddock system installed on farm.

“We are using an ABC grazing system as it suits my farm and encourages visits to the robots, with the gates changing every eight hours.”

Once the cows go out to grass, he said, you need a strategy to get the cows moving.

“It’s a big change to go from being herded to the parlour to moving freely and individually to the Lely Astronaut.

“It was during this phase of the start-up that I found the support and advice from Lely to be really invaluable,” Brendan said.

Touching on his future plans, Brendan said: “I will go up to 130 cows and my main aim now is to improve the quality of the herd.

“I have 50 replacement heifers coming on next year; so it shouldn’t take too long. I had very little specific information about the cows on the old system apart from milk in the tank.

“The Lely T4C (time for cows) management programme is very easy to follow. I now know a lot more about my cows and with the heat detection system you have a clearer idea of when cows are in heat.

“The system is really helping me identify the passengers and I can’t afford to carry them any longer,” Brendan concluded.

Brendan Collins will host an open day on his farm at Kilmalooda, Dunmanway, Co. Cork, on Thursday, July 20. The open day will run from 11:00am to 4:00pm.

The farm will be signposted from the R587; the Dunmanway to Macroom road.