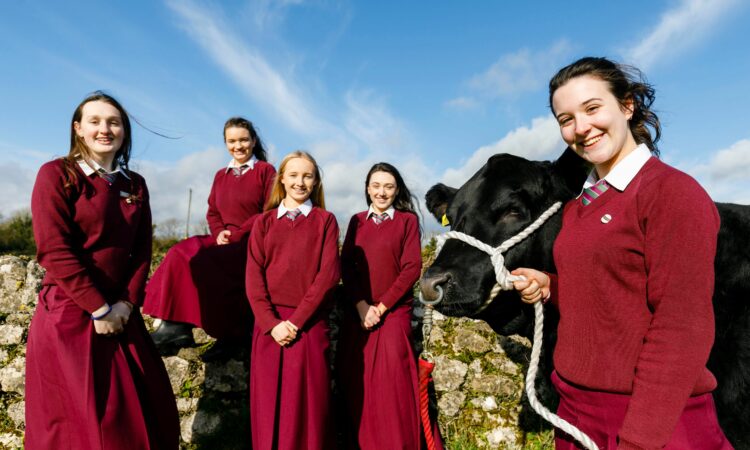 Five students from Laurel Hill Secondary School in the heart of Limerick city were announced as the overall winners of the 2019 Certified Irish Angus Beef Schools’ Competition at an awards ceremony held in Croke Park today (Thursday, March 14).

The students – Susan O’Neill, Jane McNamara, Aishling O’Neill, Aoibhinn Leahy and Emily Walsh – took the top prize, in spite of the fact that none of them come from a farming background.

It aims to promote the Certified Irish Angus Beef brand while communicating the care and attention required to produce quality beef for consumers.

Announcing the winners, Charles Smith, general manager of Irish Angus Producer Group, said: “The students from Laurel Hill were deserving winners of this competition; not only for their work ethic, commitment and interest in the project they were given – but also because, for them, everything was a bigger challenge and they met that challenge head on.

None of them have a farming background or any agricultural knowledge; yet they fully embraced this project and excelled in its delivery.

The winning students helped to rear their Angus calves at the Salesian College Farm in Pallaskenry over an 18-month period, until they accompanied them to the meat factory where they were processed as beef.

They also explored a project on ‘The Importance of Irish Agriculture’, creating lesson plans that could be used by primary school teachers to explain agriculture, beef production and the unique characteristics of Irish Angus beef.

The girls created the slogan ‘From Wellies to Bellies’ and a cartoon of Alfie the Calf to appeal to a younger audience.

The runners-up in the 2019 competition were Cathal Moran and John Duignan from Glenamaddy Community School in Galway who explored the sensitive theme of ‘Mental Health and Wellbeing Among Farmers and Rural Communities’.

The judges said: “These exceptional young men showed a commitment beyond their years and a huge empathy for the issue of mental health and the importance of addressing the issue at farmer level.”

The organisers also awarded one individual for her personal contribution to the competition. The award went to Emily O’Callaghan from Davis College, in Mallow, Co. Cork.

The Certified Irish Angus Beef Schools’ Competition aims to allow students to apply the knowledge they learn in the classroom to a real-life setting.

Each of the finalists receive the financial benefit involved in the selling of the animals to the processors on completion of the project which amounted to an average €6,500.

The organisers are currently in the process of selecting five new schools from a shortlist of 32, who presented their project ideas at the Croke Park event today.

The five schools who have demonstrated the best understanding of the project will be announced in April and will be presented with their calves at the National Ploughing Championships in September 2019.

For further information on the project visit the Irish Angus producer group’s website.