Slurry tanks on many farms across the country are almost full to capacity, according to Teagasc’s Head of Environment Knowledge Transfer, Pat Murphy.

“And, no doubt, farmers will want to get slurry out as quickly as possible,” he said.

“But it will take four to five days of decent weather before this can be considered in the driest parts of the country. But in many other regions it could take up to three weeks of dry conditions to ensure that land is dry enough to accept a dressing of slurry.”

Murphy confirmed that the slurry ban ends for farmers in the south of the country on January 12. 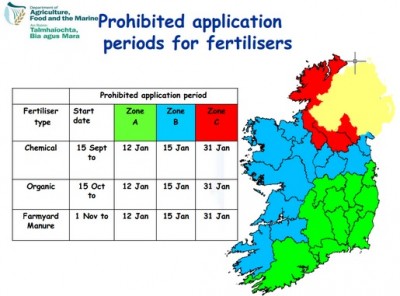 But the regulations clearly specify that slurry can only be spread if land conditions are suitable and heavy rain is not forecast.

“Farmers can get advice on these matters from their local Teagasc advisor. But the ultimate responsibility for the timing of all slurry spreading applications remains with the farmer.

“As a rule of thumb, slurry should be spread on the driest fields first, even if these are that little bit further away from the farm yard . Using an umbilical system will help to minimise land damage early in the season.”

Murphy said that GLAS farmers, who had registered the use of a trailing shoe spreading system, must take account of the extra weight involved, when putting slurry out.

“In such instances the tankers tend to be larger than those used with a splash plate only. And the extra weight of the spreading system must also be factored in.”

The Teagasc representative indicated that farmers with tanks that are about to overflow could store slurry temporarily on other farms.

“But Department of Agriculture advice should be sought on this matter before slurry transfers of this nature are undertaken.”