Video: Farmers spray hundreds of litres of milk in protest in Brussels 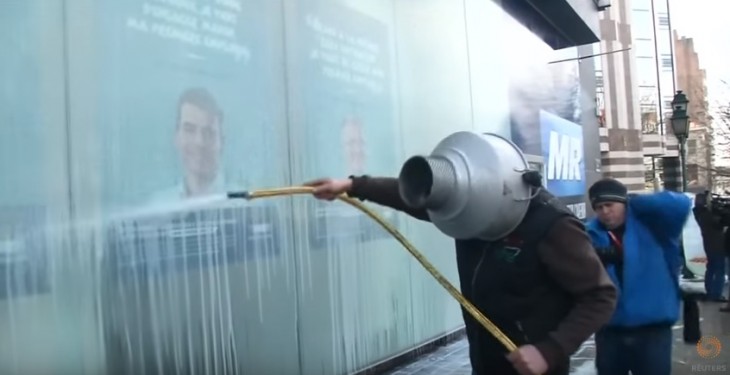 Farmers from across Europe were protesting today in Brussels as EU Agriculture Ministers met to try and come up with solutions to the ongoing crises in the dairy and pigmeat sectors.

The video below shows one farmer with a churn on his head spraying European Parliament buildings with milk.

Low prices across all farming sectors and the Russian ban were what they were protesting over.

French Agriculture Minister, Stephane Le Foll, said that “if we don’t take stock of the problem and can’t co-ordinate and consult with each other at EU level we’ll head towards an even more critical situation than we have at the moment”.

Le Foll said that there’s no such thing as a last chance meeting, there’s only a will to fight until the end to obtain solutions.

You can view the video here.

Danny Kemp, the Brussels Deputy Chief for AFP news, tweeted these photos of some cows near the European Commission buildings.

There wasn’t a repeat of the scenes last September when the Farm Council last met and 6,000 farmers descended on Brussels.

Farmers protesting by spreading straw outside EU buildings, then set it on fire. A police cordon was set up outside the European Commission to stop the farmers from getting any closer to the buildings.

The Commission today announced a new set of measures to combat the crises in the dairy and pigmeat sectors.

In response to the proposals for a new private storage aid scheme for pigmeat, Commissioner Hogan will consider the introduction of a new scheme.

It is also examining the feasibility of an export credit scheme. The full list of measures can be seen here.