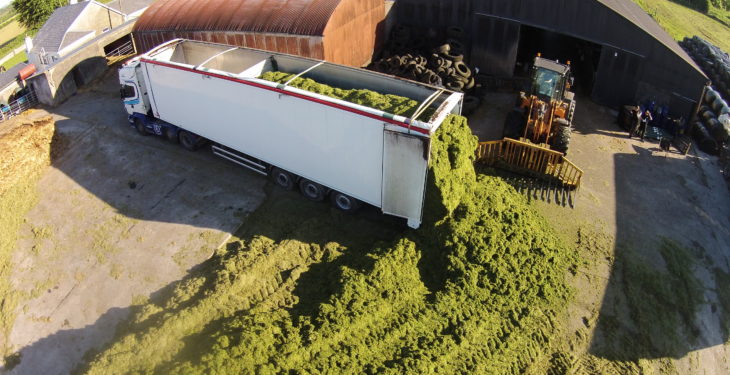 A local haulier was recently called in to help a farmer draw silage close to 35km from the field to the pit in east Co. Galway.

In what would be a round-trip of over 70km, a total of four articulated trucks towing trailers – equipped with walking floors – joined this impressive spectacle.

The rest of the fleet consisted of four tractor and trailer combinations, as well as a Claas Jaguar 860 forage harvester. Two Claas tractors were operating alongside a Fendt and a Case IH.

The field, which is about 60ac in size, was cut using a Krone Big M Mark 2 self-propelled mower.

Kennedy Brothers, based in Ballyforan in Co. Roscommon, were the contractors tasked with tackling this mammoth job.

Meanwhile, the man on the pit was equipped with a Case 721F loading shovel with a folding buck-rake (fork).

This spectacular footage was taken by a young photographer in Co. Galway named Conor Ryan, who operates under the name Galway Agri Videos.

His YouTube channel, which has amassed almost 5,000 subscribers, consists of over 170 videos – featuring a range of different jobs carried out by farmers and contractors.

Since posting his first video approximately three years ago, the young photographer has garnered over 2.2 million views on YouTube alone.

This impressive figure doesn’t take into account the amount of views Ryan’s videos have captured on his popular facebook page, which has attracted over 10,200 likes.

However, this recent video taken by Ryan isn’t the first time that he has captured this unusual fleet in action.

His most popular video contains similar footage of tractors and trailers working in unison with artic trucks; it has attracted almost 650,000 views on YouTube. 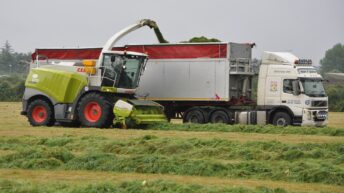 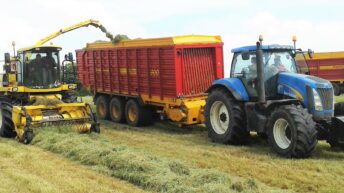