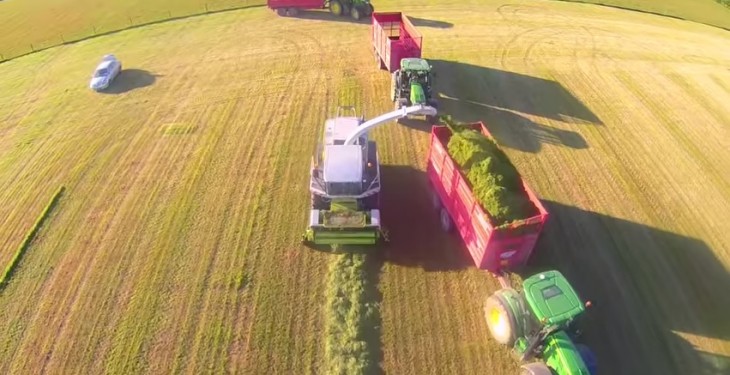 The majority of Ireland basked in summer sunshine over the weekend bringing great conditions for cutting silage.

Agri-contractors Brennans of Leighlin are making silage for the Nolans of Ballower in Co. Carlow.

The Brennans have filmed their Claas combine picking up the grass and putting it into their trailers, at one stage three tractors with trailers can be seen lining up to collect the grass.

Covering the pit also features in the video, with no less than seven people on ready to roll the plastic down over the pit.

According to Met Eireann the good weather is to continue for the week.

Tuesday (June 16), will also be mainly dry, with some bright or sunny spells, especially in the east and southeast, but Atlantic coastal areas will remain dull and misty, with patches of drizzle and fog, it says.

It will be a warm and humid say with maximum temperatures 16 to 22 degrees Celsius, it says.

According to Met Eireann the outlook is uncertain for the weekend, but early indications suggest that there will still be a good deal of dry weather, although a few showers or spots of rain are possible and it may turn a little cooler and fresher over the weekend.

See also: Silage 2015 is in full swing, has your photo made the cut?