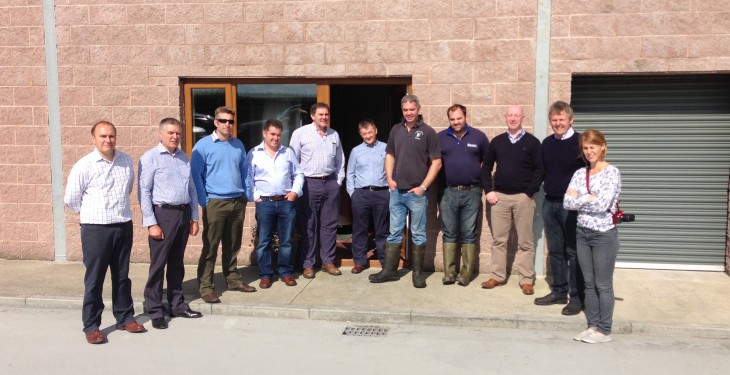 Dairy representatives from each of the UK Farming Unions were in Northern Ireland recently to meet with the Ulster Farmers’ Union to discuss a wide range of issues affecting the Dairy Sector. Representatives from NFU, NFU Scotland, NFU Cymru and Brussels Agricultural Bureau (BAB) were present.

Ulster Farmers’ Union Deputy President Barclay Bell said: “The meeting was a perfect opportunity for us to meet with our GB counterparts to discuss a number of issues affecting the dairy sector. The recent announcement of Russia’s decision to ban all agri-food imports from the EU, as well as several other major countries has caused concern and dominated discussions however, since the detail on the embargo was unclear at the time of the meeting, we are still trying to assess what it means for the entire UK dairy industry.

“The current direction of farmgate milk prices, pricing volatility, the possibility of forward contracts and the Voluntary Code of Practice were also up for discussion. We looked at the functioning of the Red Tractor Assurance Dairy Scheme within the UK and how the future certification effectiveness will be measured. We also had a lengthy conversation about the EU Commission’s recently launched Milk Market Observatory (MMO).

“We agreed that for the MMO to be a success the availability of reliable data specific to each EU Member State dairy sectors must be easily assessed and be presented to the MMO in Brussels. Whilst Dairy Co will be in a position to provide this on behalf of the GB farmers, the UFU are pressing that Northern Ireland specific dairy data is accounted for in all submissions. This is something which the UFU are currently working on.”

Barclay concluded; “Overall, the meeting with our GB counterparts was very constructive and a lot of ground was covered. The visit also incorporated a visit to Thomas Steele’s innovative dairy farm outside Kircubbin proved very informative to dairy representatives from each of the UK Farming Unions. With milking over 450 dairy cows three times a day, the Steele family successfully demonstrated how their state-of-the-art rotary parlour has changed how they farm for the better. By focusing on the latest technology Thomas has not only increased heard numbers and production but it has improved on-farm efficiencies over a period of time.”