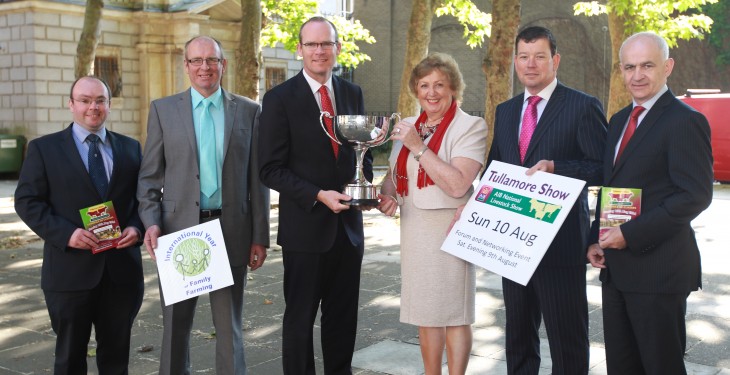 At the launch of the Tullamore Show are Rodney Cox, Minister Simon Coveney, Freda Kinnarney and Ken Burke.

The official launch of the Tullamore Show took place this week, with the Minister for Agriculture Simon Coveney in attendance.

This year’s show takes place on Sunday, August 10 and according to the organisers, promises to be the best yet. Speaking at the launch, Minister Coveney said: “The Tullamore show, which incorporates the AIB National Livestock Show is a flagship event in the Irish Agricultural Year and wonderful occasion to see the best cattle in the country. The event illustrates the range of stakeholders, including farmers and small businesses that are an integral part of our Agri-food industry.”

Rodney Cox, Chairman of the Show Committee said entries are”pouring in” for the show with the closing date of July 11 fast approaching for postal entries and online entries of July 18. Mr Cox said that there was major improvement in the show grounds and the roads and this year’s show is expected to be the biggest and best ever with an increase of 30% in trade stand space expected.

Ken Burke, Head of Business Banking at AIB said: “The Tullamore Show and AIB National Livestock Show is a real symbol of the significant contribution that the family farm makes to the economy and society in Ireland. AIB is delighted to continue its association with the Show, which is one of the premier events in the agri livestock calendar, and Ireland’s largest one day agricultural event.”

The Minister, in highlighting the fact that 2014 is the International Year of Family Farming, said that: “In this International Year of Family Farming, the Tullamore Show, with an anticipated 70,000 attendees, illustrates how integral the agriculture sector in general, and the family farm in particular, is to local and rural communities, representing a key to boost to the financial well-being of local economies. I would like to congratulate the organisers and volunteers who make it such a successful occasion.”