Storm Desmond: More rain forecast for tonight as West is hit by 85mm in 24hrs 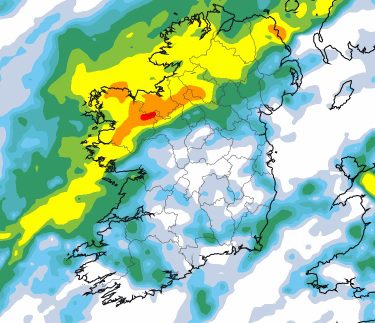 Over 85mm of rain has already fallen in parts of the West of Ireland over the past 24hrs and according to Met Eireann, another 20mm is set to fall in these areas tonight.

Reports from across the country suggest significant amounts of farmland already underwater with local roads in many areas also flooded.

Further very heavy rainfall expected through today and early tonight with accumulations of 30 to 50mm expected in addition to the 30 to 50mm which have accumulated from noon Friday to Saturday morning.

Meanwhile, a status orange rainfall warning is in place for Cavan, Cork and Limerick.

Southwest winds with mean speeds of 55 to 75km/h will gust 100 to 120km/h. Winds will be strongest for coastal areas.

#stormdesmond Extreme care is advised if you are taking to the roads tonight. Safe journey.

Widespread rain will continue for rest of today, especially in Connacht and west Ulster, where prolonged falls of heavy rain will bring some further flooding.

Rain will be more intermittent in eastern and southern counties. Continuing extremely windy, with gale force southwesterly winds and some severe gusts.

Met Eireann says it will continue very wet and windy for a time tonight, with further heavy rain especially in western and northwestern areas.

Sunday will be a bright but cool day with mostly light winds, according to latest forecasts.

Met Eireann says some sunny spells will develop and it will be dry apart from a few isolated showers.

However, it says cloud will thicken from the southwest and outbreaks of rain will push into south Munster during the evening in a freshening southeasterly breeze.

It will stay wet and windy for the first half of Monday.

However, rain will clear to showers on Monday afternoon, and southerly winds will moderate to some extent, Met Eireann says.

According to Met Eireann, the remainder of next week will see further showers or longer outbreaks of rain, although the south and east will become drier later.

Winds will be west to southwest in direction and will be strong much of the time and it said that the mid-week period will be rather cool but milder conditions are likely to develop later.