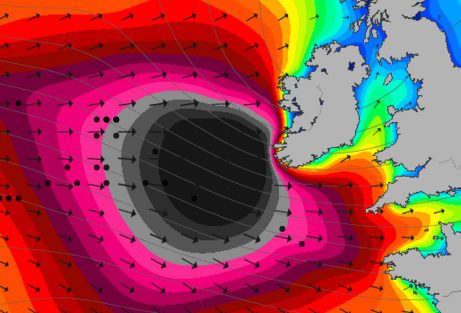 Many farms are without power this morning as Storm Imogen hit the country last night with heavy rainfall and storm force winds leaving almost 5,000 homes without power.

The south-west took the brunt of the storm with westerly winds reaching mean speeds of 65 to 75 km/h with gusts of 100 to 130 km/h, strongest winds along the coast and on hills.

A Met Eireann Orange Wind Warning remains in place for both Cork and Kerry until midday.

The Atlantic depression tracked eastwards bringing storm force winds to southwest and southern coasts of Ireland on Sunday night and will continue this morning.

ESB networks are reporting that Cork and Kerry have taken the brunt of Storm Imogen. It reports major faults in both Glengarriff in Cork and Rathmore in Kerry.

The weather is set to turn cold over the coming days.

According to the latest Met Eireann, forecast tomorrow will be a cold and blustery with some wintry showers.

Wednesday will also be a chilly day with frost at first and some icy patches and highest temperatures 5 to 8 degrees in moderate westerly breezes. There will be good sunny spells at first then it will turn cloudy as a band of light rain or sleet extends eastwards. Frost and icy patches again Wednesday night.

Met Eireann says on Thursday many areas dry with some sunny spells but some wintry showers will occur. Highest temperatures just 3 to 7 degrees in light to moderate southwesterly breezes. Wintry showers may become more widespread Thursday night and there may be some icy patches also.

Meanwhile, on Friday a cold day with wintry showers and highs of just 3 to 7 degrees.

The outlook for the coming weekend is for the rather cold weather to continue with some wintry showers and some night frosts. There is a possibility of milder weather returning next week.