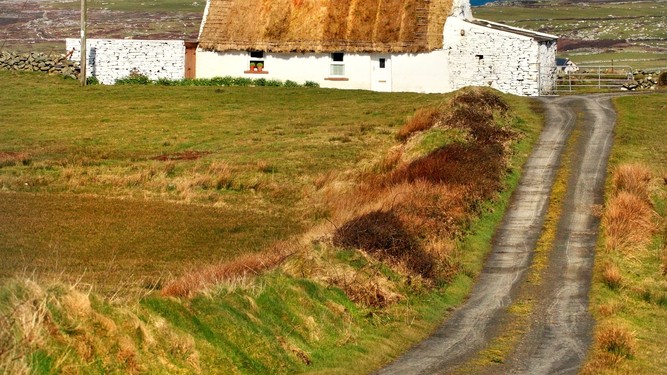 Grants for the renovation of thatched cottages throughout Ireland are set to be significantly reduced.

This is according to the Minister for Arts, Heritage and the Gaeltacht in reply to a parliamentary question from Deputy Padraig MacLouchlainn yesterday evening in Dail Eireann. Here is the debate.

In 2102, €500k was allocated to safeguard structures protected under the Planning and Development Acts of the local authorities. This funding assisted in the conservation of two thatched structures.

In addition, the Heritage Council,  grant-aided the restoration of 23 thatched structures under their Heritage Management Scheme in 2012. In addition, the Heritage Council, in partnership with the Department of Agriculture, Food and the Marine, also administers a grants scheme to REPS 4 participants on the conservation and repair of traditional farm buildings, known as the Traditional Farm Buildings Grant Scheme.
The Environment Department also administers a grant scheme for the renewal or repair of thatched roofs of owner occupied houses.

According to Minister Jimmy Deenihan: “The level of funding available in 2013 and future years for these schemes will be subject to the normal Budgetary and Estimates processes but…the scope for funding for the conservation of the built heritage is constrained by the significant reduction in the public finances.”

An advice book on thatching as part of the Architectural Advice Series will be available later in the year.