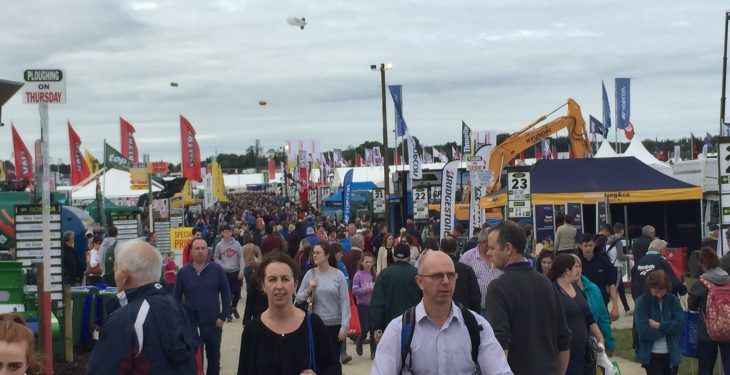 Hundreds of thousands of people are expected to visit the National Ploughing Championships in Tullamore this week.

With traffic expected to be bumper-to-bumper, the team here at Agriland has created the ultimate Ploughing playlist to ease the boredom as you wait in traffic to access the site.

1. Go Your Own Way – Fleetwood Mac

Despite a traffic management plan and newfangled satellite navigation systems, there will always be one or two people that will inevitably get lost on the way to the Ploughing’s new home in Screggan.

Don’t be embarrassed, just stop the car and ask for directions!

Lets face it, everyone knows the words to this song.

Whether you can hold a tune or not, it is an ideal song to burst out as you wait for the path into the car park to clear. Don’t mind the funny looks, embrace them, this is Ploughing 2016!

3. Hold Back the River – James Bay

With the weather in Ireland so unpredictable at times most people will be hoping that the rain stays away for the duration of the three-day event.

But the forecast from Met Eireann doesn’t look so promising, with a danger of some heavy showers on the second and third day of the championships, you will be hoping that you don’t have to hold back the river!

4. This is what you came for – Calvin Harris ft. Rihanna

The excitement is building on the journey to the Ploughing. You’ve seen all the coverage in the lead up, the ploughing has been the only thing on your mind since the silage season ended in July.

Never mind Electric Picnic, the National Ploughing Championships is what you came for.

No playlist for sitting in traffic is complete without a song from the Red Hot Chilli Peppers.

No matter how stressed you are in the slow moving traffic, once this song comes on you can let your inner rocker come out and release all your pent up anger by singing along to this absolute classic.

A very popular van in Ireland, you’re sure to see plenty of them in all shapes and sizes at this year’s Ploughing.

With over 1,500 exhibits and 25km of pathways put down to explore, your feet will be tender and sore getting back to the car.

Your body will have aches and pains you didn’t know were possible. Everyone knows a day at the ploughing will test even the fittest men, women and children.

On the last morning of the Ploughing everyone will be gossiping about where it may be held the following year.

People will be discussing the pros and cons of the current location and trying to figure out where next year’s event will be held.

Every year you promise yourself that you won’t leave it so late to go and find your car to head home.

But there’s so much to see and do at the ploughing and the time passes by so quick, leaving everyone rushing for the exit at the same time like the proverbial bat out of hell.

It’s home time. The mood has changed in the car. The excitement from the morning’s drive has turned to exhaustion and everyone is on edge.

From previous experience, it is best to just sit quietly – nobody wants and argument on the way home!