Temperatures to plummet to -4° tonight 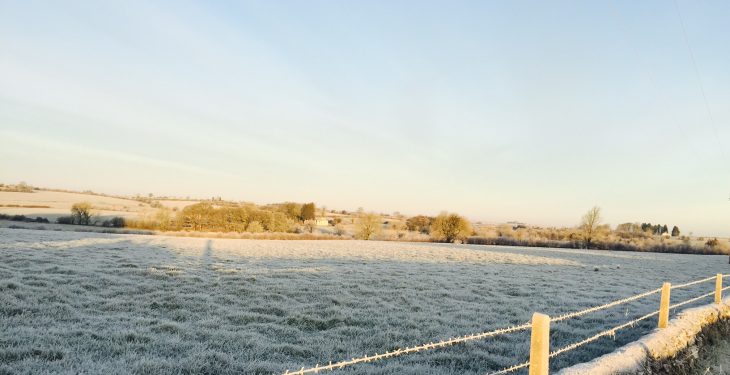 Temperatures are set to plummet tonight (Thursday, November 1) with lows of -4° expected, according to Met Eireann.

This morning frost and fog will clear slowly as the southwesterly breezes remain light, but winds will increase moderate west to northwesterly during the afternoon, the national meteorological office has said.

Some patches of fog may linger in the east and northeast until later. It will be a cold, sunny and mostly dry day, but scattered showers will affect the west and north.

Top temperatures today are expected to be between 6° to 9°, generally coldest in the north and east, but slightly colder in local areas where fog lingers.

Tonight will be dry with good clear spells with perhaps just an isolated shower in the north.

It will become very cold with lowest temperatures falling to between 0° and -4° leading to a widespread frost and the risk of icy stretches.

Winds will be mostly light variable with some patches of mist or fog forming, but winds will increase moderate southerly later along Atlantic coasts.

Tomorrow, frost will only slowly clear as southerly winds will be mostly light at first but moderate along Atlantic coasts.

However, the southerly winds will increase moderate to fresh during the afternoon and along Atlantic coast fresh to strong and gusty.

It will be dry and bright at first but cloud will soon increase with rain in the west during the afternoon spreading further eastwards during the evening.

It will still be a cold day with afternoon temperatures of 5° to 9°, but it’s expected to become much milder later in the evening as temperatures rise to around 8° to 12°.

Rain will be persistent or heavy at times, especially in the west and north. It will be a very mild night with temperatures reaching the low teens, Met Eireann forecasts.