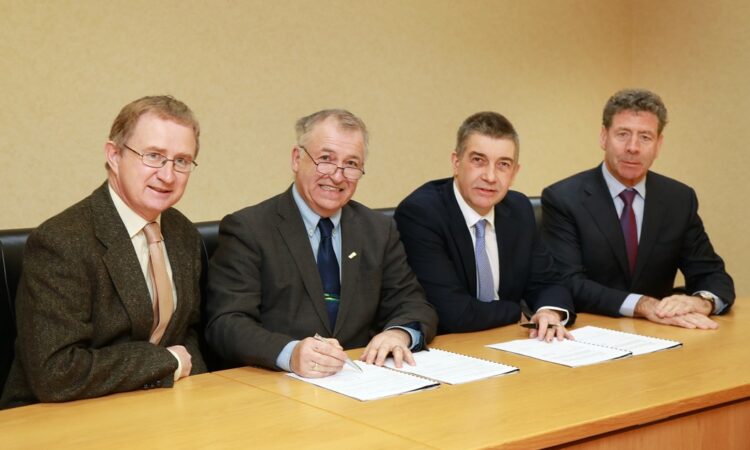 A renewed ‘memorandum of understanding’ (MOU) has been signed by Teagasc and Animal Health Ireland (AHI), building on the co-operation between the two organisations.

The two bodies hope that the agreement, signed today, January 4, will bring about further collaboration in areas of research and animal health.

According to Teagasc, the purpose of the MOU is to “improve the health status of the national herd, and thereby contribute to productivity, profitability, product quality and animal welfare”.

Co-operation between the Teagasc and AHI has resulted in a number of developments in the agriculture sector, including the ‘CellCheck’ mastitis control programme, which has “achieved significant progress in reducing the somatic cell counts of Irish dairy herds”, according to Teagasc.

The two groups say that their combined aims for 2019 include encouraging milk recording among more farmers, which they say will allow cows with higher cell counts to be identified, and will also improve animal health generally.

The organisations will also collaborate on the CalfCare events and the Beef HealthCheck meetings – the former are scheduled for this month, while the latter meetings will be held throughout June and July.

“It is vital that our two organisations collaborate to use our combined resources to maximum effect to bring about improvements in animal health. Healthy animals are happy animals and lead to greater production efficiency and also have a positive effect on the environment,” Prof. Gerry Boyle, director of Teagasc.

The signing of this MOU allows us to further develop and grow the co-operation between our two organisations.

Meanwhile, AHI CEO Dr. David Graham said: “Working with Teagasc helps us to develop and deliver evidence-based information and programmes on animal health to Irish farmers and the industry in general”.

The memorandum will now remain in place for 5 years.