Targeted drainage scheme was considered in RDP plan, according to Minister Coveney 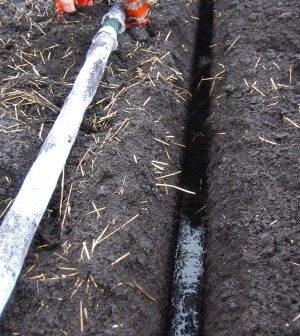 The Minister for Agriculture Food and the Marine Simon Coveney has confirmed that a drainage scheme was considered for inclusion in the new Rural Development Plan 2014-2020.

Responding to a parliamentary question from Deputy Patrick O’Donovan on the topic the Minister stated: “My Department considered the possibility of putting forward a targeted farm drainage scheme for EU Commission approval within the context of the 2014-2020 Rural Development Programme.”

However, he said: “But concluded that too many issues of an environmental, financial and administrative nature would have to be overcome in proposing such a scheme as a priority measure under the new Programme.”

According to Pat Tuohy of Teagasc Moorepark, who was speaking at the Positive Farmers annual conference recently, land drainage is seen as one of the most important components for achievement of Food Harvest 2020 goals.

“Almost half of the agricultural land in Ireland would benefit from reclamation and/or drainage; in some counties the percentage is higher,” he said.

Minister Coveney outlined: “My Department’s consultation paper states that further targeted areas may be identified within the lifetime of the new Programme as appropriate for grant-aid and the issue of a drainage scheme will be borne in mind in that context.”

While the new EU policy framework setting out the broad principles in relation to rural development for the 2014-2020 period has now been finalised.  The Minister stated: “My Department is currently considering the comments received from the various stakeholders in response to the consultation paper which was published by my Department in January 2014.”

According to the Minister, the consultation paper sets out a number of priorities in the case of on-farm investment schemes under the new Programme, including further support to encourage investment in the dairy sector due to the forthcoming abolition of milk quotas, an enhanced scheme of grant-aid for young farmers with a special grant-rate of 60 per cent, and a new farm building measure which will provide grant-aid for the construction of animal housing and slurry storage.