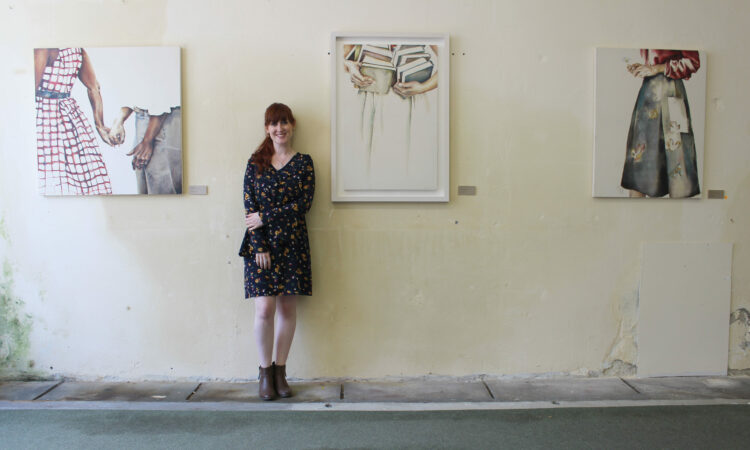 Rooted in an outdoor way of living, artist Nadia Corridan has rediscovered a love of the land. Based in a studio on her partner’s tillage and sheep family farm in Co. Wexford, she has found an inspirational setting.

Nadia, who exhibited her work at the recent Enniscorthy Rockin’ Food Festival, said she is constantly learning about farming through the eyes of her partner, Russell Jacob.

“His farm is nestled at the foot of The Blackstairs Mountains on the Wexford border and has been in his family for many generations,” she said.

The two creatives met in Cork when Russell was working in the studio of the internationally renowned furniture designer, Joseph Walsh.

Growing up on a farm

As a child, Nadia enjoyed spending time on her grandparents farm and has now rediscovered the inspirational power of working close to nature.

Her parents moved to the U.S. in the early 1980s; her mother was a nurse and her father was a mechanic and a car dealer. They lived in San Francisco with her brother and sister until the late 1990s.

When Nadia was seven years of age, they moved back home to Riverstick, Co. Cork, after her father inherited the farm from his parents.

“The outdoors always played a big part in our lives, even while living in the U.S. The first memory I have of growing up in a farming environment is collecting eggs from my grandmother’s hens at her farm on our visits to Ireland every summer.

Collecting eggs, milking cows, seeing chickens plucked were all strange curiosities that became important lessons in hard work and learning where the food on your table comes from, especially when I had moved from the suburbs of the U.S.

“Originally, my parents farm was a small dairy holding run by my grandfather who moved his family from Duagh, Co. Kerry, in the 1960s. Today, the landscape of the farm has changed since I was a little girl. These days it is mostly tillage.

“My parents love of gardening and growing vegetables takes precedence more and more each year, with the walkways through the fields containing an abundance of different trees and flowers from eucalyptus to Japanese Acers,” she said.

“Although he would say it was incredible from the skills he learned to the work trips all over the world, nothing beats the inspirational outdoors, walking the land and seeing the seasons change and crops grow. Last November, he completed his Green Cert at Kildalton College in Kilkenny,” Nadia said.

“I never thought much about being an artist when I grew up. Art has always been a part of my life. My parents approach has always been to use your hands and mind to create and explore.

“So, looking back on my childhood, it probably was a bit different to the other kids in my class. Firstly, there was no T.V. in our home. The abundance of art materials and classes I attended filled those gaps; from stone cutting to pottery classes. You name it and my parents signed me up.” 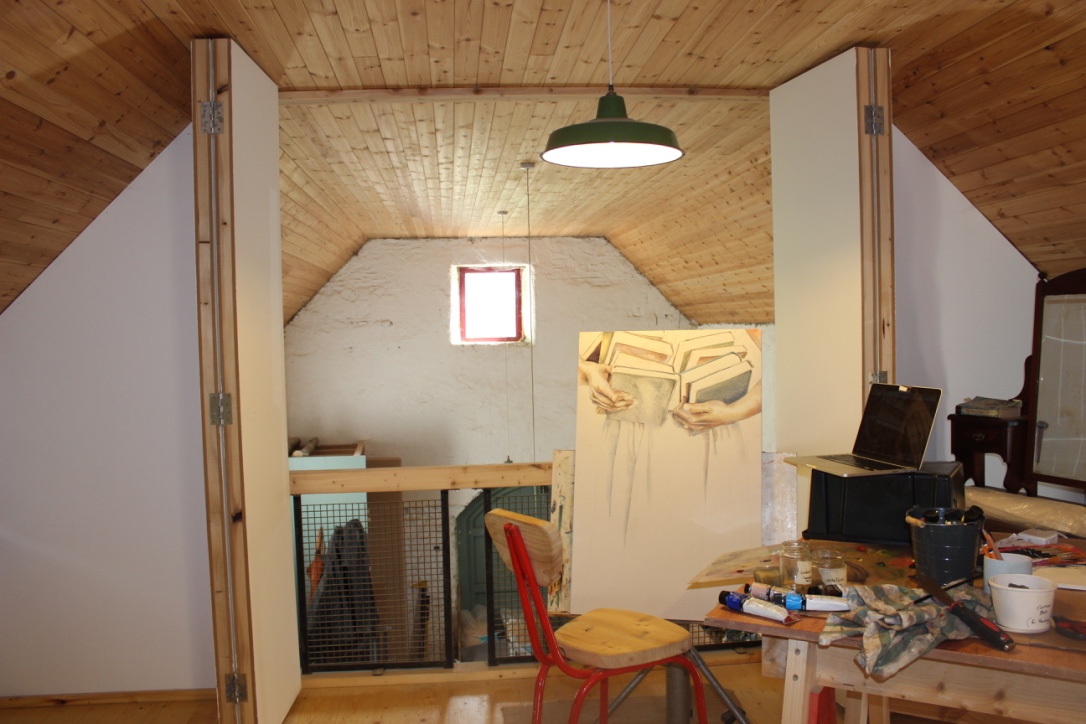 It was only when Nadia got to sixth year that she started thinking about art as a career. She attended a fantastic, one-year art portfolio course in Colaiste Stiofain Naofa, Co. Cork, to see if she was serious about being an artist. From there she went on to the Limerick School of Art and Design, and studied fine art painting.

“When I look back on my relationship with farming, it’s really a mixed bag. As a child I was purely led by my curiosity when I visited my grandmother’s farm.

Growing up as a teenager on a farm, I didn’t have the same connection and love I once had. I think, as well as being a teenager, I saw how much my family was divided by the transition in moving home, so farming to me became resentful. There was a lot of underlying tension that was being swept under the rug.

“It was until I met Russell that my wariness of farming changed. To Russell and his father, farming was in their blood. It was in their skin. Whereas to my family, I felt we walked out the door putting that second skin on.

“It’s a beautiful thing to meet someone passionate in what they do, no matter what it is. It energises and inspires you to think outside the box; it pushes you to be a better person and to learn from your own histories.”

Nadia, quoting a line from artist Hughie O’Donoghue, said: “What memory records is how we feel about things, rather than what we know.

“I feel with my art and farming, my personal histories are entwined within the paintings more than I realised. Memory and touch are central themes that run within my practice.

“I think now on reflection, my mind is always trying to figure out my life and the relationships around me. I have spent a lot of my life trying to be the peacekeeper or the glue that holds us together, so there is definitely an element of control that appears in my painting.” 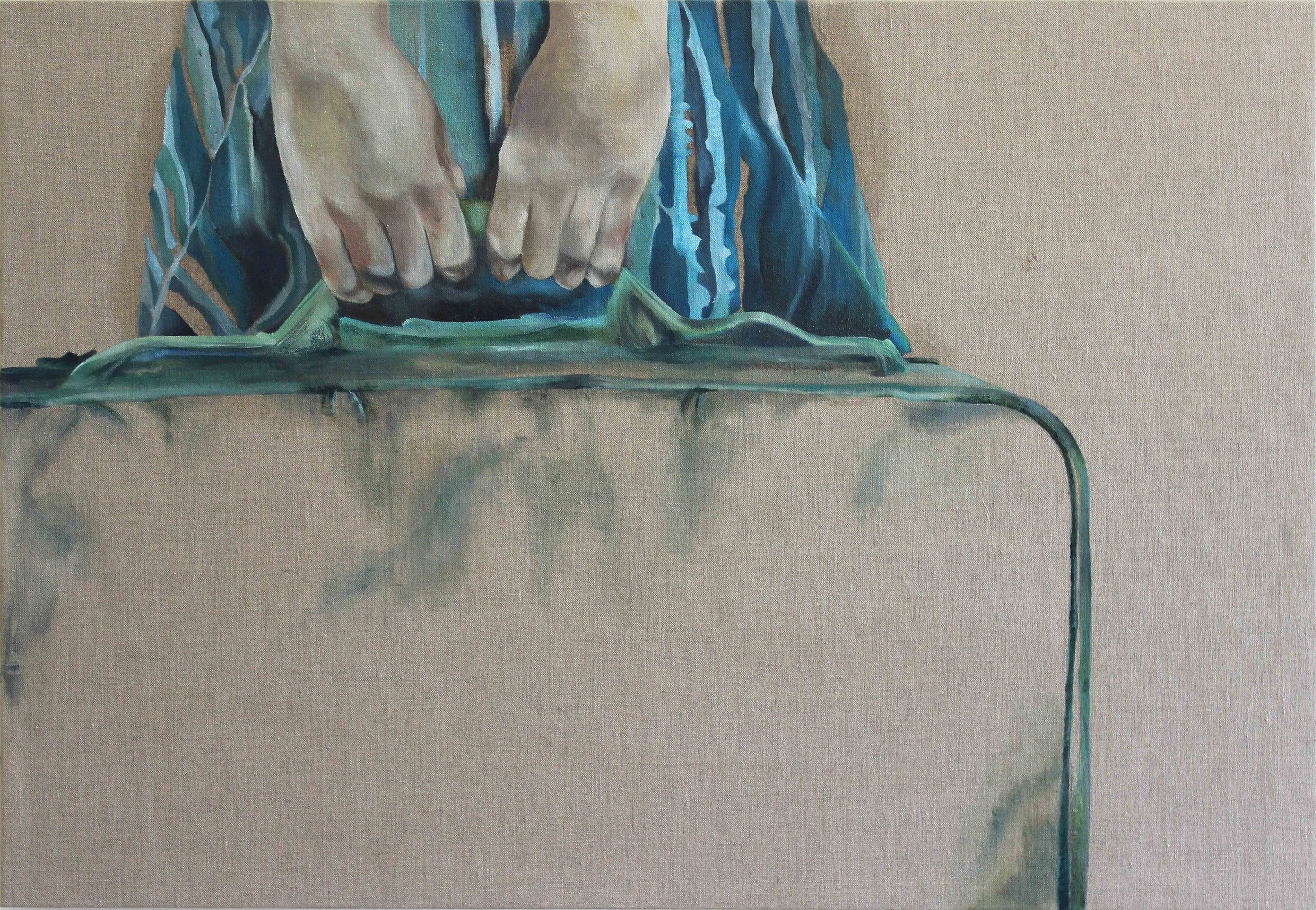 The intent of the compositions have been carefully considered. The pared back scenes of unknown figures seem to be frozen in mid-walk, into or out of cropped frames; creating a sense of fragmented time and fragmented histories.

“With all my work, there is a level of ambiguity in the original storyline that inspired the painting.”

This is added by the bare canvas and washed out tones which probe, evoke and conjure up faded memories and gaps of uncertainty. These gaps allow room for the viewer to fill in new narratives and reflections of one’s personal memories.

As well as working from her home, Nadia has a base on Russell’s farm; the ‘inspirational’ Potato House.

“Russell has converted one of the beautiful old work buildings into a studio for design projects.

One day I would love to create a retreat for artists and art lovers alike on the farm. I can imagine, with its thick granite walls and arched red doorway, a space where artistic and creative energy can flourish.

“The farm is beautiful and full of history, so it’s easy to see how appealing and inspirational it would be in attracting visitors and artists; set against the backdrop of the Blackstairs Mountains, framed by barley fields, sheep, windmills. I would like to share what I have rediscovered with people.”

Plenty of farmers combine farming with artistic endeavours, she observed.

“I meet people all the time who think that art is not for them because somewhere along the lines a parent, teacher, peer or themselves made them feel conscious that they are not good enough.

“But art isn’t about that. It’s about exploring, making mistakes and expressing yourself. I would like to convey that through my space, and the farm would be the perfect inspirational setting.” 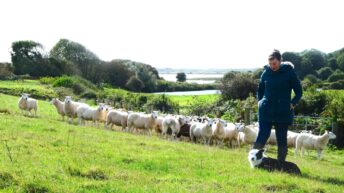 ‘My work is a journey into the land of shepherding’