Lamb prices have shown some signs of improving this week as factory buyers look to secure stock to meet orders for the upcoming Muslim Festival of EID.

Already this week, Kepak Athleague has increased the quoted spring lamb price by 10c/kg and are now working off a base price of 470c/kg.

However, some of the other players in the Irish sheep trade, Irish Country Meats and Kildare Chilling have maintained quotes at last week’s level, with both offering a base price of 460c/kg.

Looking at the ewes, there has been little change in terms of price, with most factories willing to pay a base price of 230-240c/kg for suitably fleshed cast lots.

The Muslim Festival of EID takes place on September 11 and according to Bord Bia, the Muslim Festival results in increased demand for lamb on the main Irish export markets and as a result the average weekly kill increases during the month of September.

Irish processors typically slaughter between 57,000-62,000 sheep on a weekly basis, but during the month of September, throughput increases by 12-23% to about 70,000 sheep each week.

However, despite the expected increase in demand for lambs in the coming weeks, some procurement managers were quick to point out that lamb supplies are remaining relatively strong.

In early August, the number of lambs slaughtered at Department of Agriculture plants declined due to falling factory prices, but over the past two weeks spring lamb slaughterings have increased back to almost 45,000 head on a weekly basis.

Lamb supplies have continued to clime with an additional 479 slaughtered at Department of Agriculture approved sheepmeat export plants during the week ending August 21.

According to figures from the Department of Agriculture, just over 44,700 lambs were slaughtered in Ireland during the third week of August, an increase of 1% compared to the week before.

Figures from the Department also show that both the number of ewe and ram and hogget slaughterings increased slightly during the week ending August 21.

According to Bord Bia, there was some increase in the level of activity in the British sheep trade due to an ease in supply.

The SQQ live price for lamb in England and Wales was making the equivalent of around 450c/kg deadweight last week.

However, its says that there has been some downturn in the French sheep trade due to a reduction in consumption on the back of the current heatwave and an influx of competitively price UK lamb on the market.

Meanwhile, it is hoped that demand will improve in the coming week in advance of the Muslim festival EID. 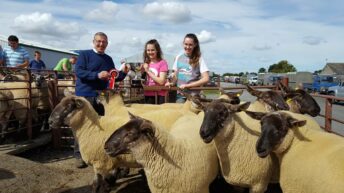