There has been some relief for beef finishers as many processors have opted to increase base beef quotes by 5c/kg this week.

But despite the increase in prime cattle prices, cows remain largely unchanged from last week, with most procurement managers offering 280c/kg for P grades and 310c/kg for R grade cows.

Like previous weeks, in-spec cattle continue to remain in demand, with many processors still willing to pay an additional 5c/kg in order to secure such animals.

Procurement managers have pointed toward some fall off in cattle supplies in recent weeks for the latest price rise, but many were cautious on numbers in the come weeks.

One cattle buyer pointed out that last week’s kill broke the 34,000 head mark, and this trend is likely to continue in the coming weeks.

Buyers are also concerned, particularly those in the South and South East, that numbers will pick up in the coming weeks, as many farmers on drier ground will begin to focus on housing stock for the winter.

The number of cattle slaughtered at Department of Agriculture approved plants has dropped for the second consecutive week.

Official figures from the Department of Agriculture’s beef kill database for the week ending November 6 show that the weekly kill is down 10% on the week before.

However, it must be noted that some of last week’s fall can be attributed to the lack of processing last Monday due to the bank holiday.

Official figures show that all categories of cattle dropped last week, with the heifer group showing the least change on the week before, with a fall of 197 head or 2.6%.

There was also some reduction in steer slaughterings. Department figures show that last week’s steer kill declined by 1,576 head on the week before.

Prices from the AHDB (the organisation for British beef) show that British R4L steers averaged 370.4p/kg (426.28c/kg) for the week ending November 4, while R3 British and Northern Irish heifers made the equivalent of 399c/kg and 384c/kg respectively.

French retail promotions were centered mainly on domestically produced product such as steaks, ribs, burgers and mince with some offal promotions taking place on imported product.

There has also been little change reported in the Italian beef trade, with the market for wholesale fore and hind quarter products remaining stagnant, it says. 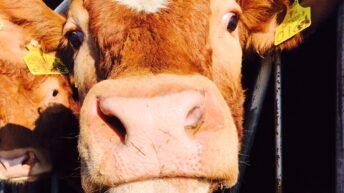