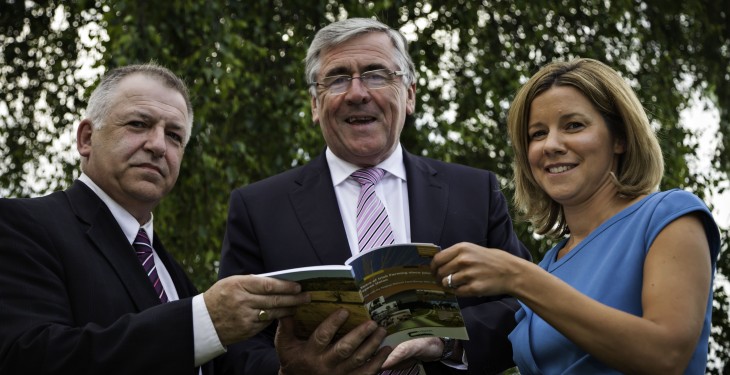 The Teagasc National Farm Survey is celebrating 40 years of publication and 2013 is also the 40th anniversary of Ireland’s membership of the EU.

The key survey measures farm incomes across the main enterprises and reflects the changes in sales, costs and incomes on an annual basis.

Teagasc marked the 40th publication at an event in the Royal Dublin Society this week. It also produced a publication to mark both celebrations entitled,  “40 years of Irish Farming since joining the EU: A journey with the Teagasc National Farm Survey”.

Accession to the EU brought with it an obligation to establish an annual survey of farm incomes to provide statistics on farming in Ireland to the European Commission. The National Farm Survey, which is Teagasc’s longest-running research project, was established in 1972 and every year since then it has been used to produce annual estimates of farm income.

Speaking at the event, Prof Gerry Boyle said: “While the Teagasc National Farm Survey was primarily established to provide statistics to Brussels on developments in Irish farm income, it has become an invaluable source of information on the economic status of farm families for all stakeholders in the sector. This publication charts the highs and lows of EU membership, as recorded by the NFS, from the golden era for milk production in the 1970s to the imposition of the milk quota in 1984. The National Farm Survey tells the story of the introduction of the first direct payment to farmers in the 1970s and traces their development to the current day, where they now comprise over 100 per cent of income on many farms”.

Prof Boyle said Ireland’s farmers had benefited greatly from EU membership and more than €50bn of funds had flowed from Brussels to Irish farmers in the past 40 years.

The survey has been conducted on a sample of more than 1,000 farms annually since 1972. Farmers participate in the survey voluntarily and receive no compensation for their participation. It is estimated that close to 20,000 farmers have participated in the survey since it began in 1972.

“These farmers were partners, along with Teagasc, in this project and deserve huge acknowledgment for their generosity,” added Prof Boyle.

In his first engagement as Minister of State at the Department of Agriculture, Food and the Marine, Tom Hayes TD also addressed the event. He spoke about the central role of the EU in the development of Irish agriculture since Ireland’s accession to the EEC in 1973.

“My colleague Minister Coveney is leading discussions to shape a new Common Agriculture Policy. As President of the European Council of Agriculture ministers, Minister Coveney has been spearheading discussions between the three European political institutions. An intensive series of technical and informal meetings as well as trilogue negotiations has been taking place over the past two to three months and will continue right up to the end of the Irish presidency at the end of June.”