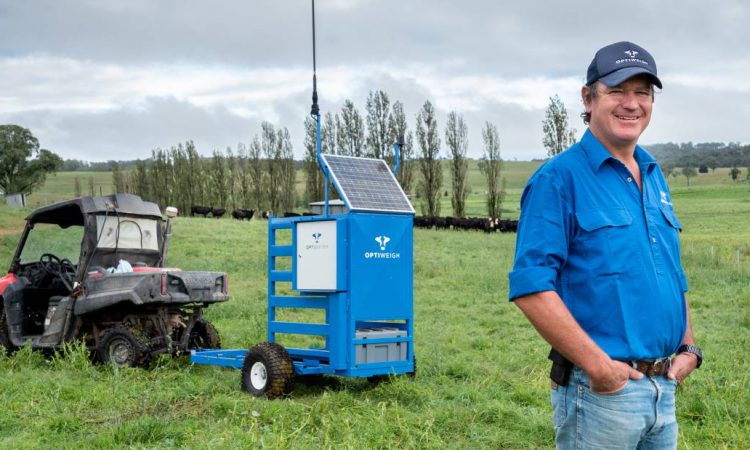 The system works by weighing the front two feet of the animal; it then uses an algorithm to ‘calculate’ or estimate the whole body weight of the animal.

The resultant data is then sent back to the farmer in real-time – to view on a smartphone or computer.

The system is also portable; it can be towed from one field to another. This means there is no need to move the cattle into a holding pen just to weigh them.

The system requires 24/7 (wireless) internet access, which is an issue for many rural Australian farmers. To combat this, the Optiweigh system is fitted with an Inmarsat (satellite-connected) device, which broadcasts data from the Optiweigh system to a smartphone or computer.

The founder and CEO of Optiweigh, Bill Mitchell, explained the results that farmers have seen by switching to the Optiweigh system.

We are getting fantastic feedback from our customers. One farm in Queensland had a weighing programme for 2,000 cattle that previously took three days from start to finish.

He also explained the benefits that the Optiweigh system can provide for farmers when it comes to selling their cattle.

“The accuracy of this data means that customers are able to sell cattle at the right time giving them higher returns.

“The partnership with Inmarsat has enabled us to deliver critical, real-time data from wherever the Optiweigh system is on a farm.”