Met Éireann has issued a Status Yellow rainfall warning for seven counties around the country, with totals of up to 40mm epected.

Issued this morning (Monday, September 28), the alert will come into effect tomorrow night at 9:00pm. It will remain in force until 12:00pm on Wednesday.

In these counties, Met Éireann warns that there will be heavy and at times intense rainfall with totals of 25 to 40mm expected. This may result in localized flooding.

Regarding today’s weather, Met Éireann says it will be mostly cloudy at first today, with outbreaks of rain and drizzle and patches of mist and fog, the national meteorological office says.

Brighter and drier conditions will gradually extend from the west this morning, with plenty of sunshine developing by this afternoon and just a few well scattered showers.

Highs of 14° to 17° are expected, with conditions coolest in the west and north.

Tonight will be largely dry and clear with patchy cloud and just isolated showers, mainly near western coasts.

Lowest temperatures of 2° to 6° are on the cards, with a touch of frost possible in the east and south.
Winds will be light westerly or variable which may allow a few mist and fog patches to form under the mostly clear skies. 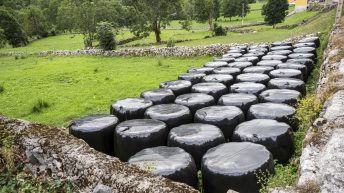